The team developed two approaches to control the functions of plant proteins related to the transport of hydrophobic pollutants.

These findings will lead to these new functions of pesticides being utilized in agriculture, enabling safer crops to be produced.

These results were published online in the international scientific journal Science of the Total Environment on June 23 and in Environmental Pollution on July 18.

The mechanism by which hydrophobic pollutants are accumulated in Cucurbitaceous plants via MLPs.
Kobe University

Hydrophobic pollutants include dioxins, the insecticide dieldrin, and endocrine disruptors. These pollutants are highly toxic, and their manufacture and use are now prohibited. However, these substances were used in large quantities up until they were banned, causing widespread environmental pollution that also affects agricultural land.

When crops are found to have accumulated hydrophobic pollutants above the residual limit, all crops grown on the same land are unable to be sold, resulting in great economic losses for the producer. For this reason, much research has been conducted into ways to remove hydrophobic pollutants from agricultural soil, however a cost-effective and efficient method has yet to be found. Therefore, there is an urgent need to develop technology for the cultivation of safer crops on arable land contaminated by hydrophobic pollutants.

This study focused on pesticides that have been confirmed to be safe. The researchers tried two approaches designed to suppress the accumulation of hydrophobic pollutants via MLPs: utilizing a "pesticide which suppresses MLP gene expression" and an "MLP-binding pesticide," they aimed to produce safer cucurbitaceous crops.

Approach 1 (published in Science of the Total Environment)

The application of a pesticide that suppresses MLP gene expression reduces the concentration of MLPs in the roots and xylem sap. This suggested that the concentrations of hydrophobic pollutants accumulated in the fruits via MLP would also be reduced. 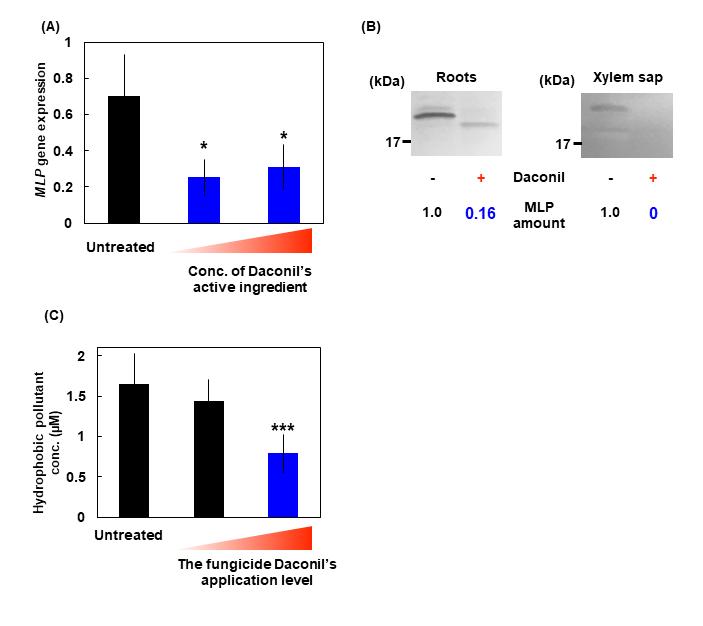 Hydrophobic pollutant concentration in zucchini was reduced by applying the insecticide Daconil to suppress MLP gene expression. A. MLP gene expression after treatment with Daconil's active ingredient. B. Accumulation of MLPs in zucchini after Daconil treatment C. Concentrations of hydrophobic pollutants in the xylem sap of zucchini grown in contaminated soil after Daconil treatment.
Kobe University

First, experiments were carried out to select a pesticide that could suppress MLP gene expression from five types of pesticide used on the Cucurbitaceae family (the insecticides Guardbait, Starkle, and Diazinon and the fungicides Benlate and Daconil). Daconil was chosen because treatment showed that its active ingredient could reduce MLP gene expression (Figure 2 A.). Next, it was confirmed that concentrations of MLPs in the roots and xylem sap of zucchini grown in soil contaminated with hydrophobic pollutants were reduced by the Daconil treatment (Figure 2 B.). Furthermore, the concentrations of hydrophobic pollutants in the xylem sap decreased by 52 percent (Figure 2 C.).

First of all, chemical arrays with approximately 22,000 compounds from the RIKEN NPDepo were used to identify compounds that bound to MLPs. The insecticide Colt that can be applied to crops in the Cucurbitaceae family was selected from commercial pesticides with similar structures to MLP-binding compounds. When Colt's active ingredient was reacted with both MLPs and the hydrophobic pollutants, the concentration of MLPs bound to these pollutants decreased by 78 percent. In addition, the concentrations of these pollutants in the xylem sap fell by 15 percent after Colt treatment.

This study revealed, for the first time in the world, that it is possible to cultivate safer crops in contaminated soil through the control of the plant's functions. This achievement could reduce the number of cases where producers experience economic losses due to being unable to sell crops grown in contaminated soil. Furthermore, this will also provide consumers with safe produce.

A new method of utilizing pesticides has been revealed by this research. For the first time in the world, this study has revealed a novel aspect of pesticides beyond their original functions of preventing pests or weed growth. Pesticides are thought to be extremely safe because they have to pass numerous strict safety tests. Furthermore, the standardized treatment of crops with pesticides is simple and inexpensive. Therefore, it is anticipated that the method developed by this study to reduce hydrophobic pollutants using pesticides will become widespread across the globe.