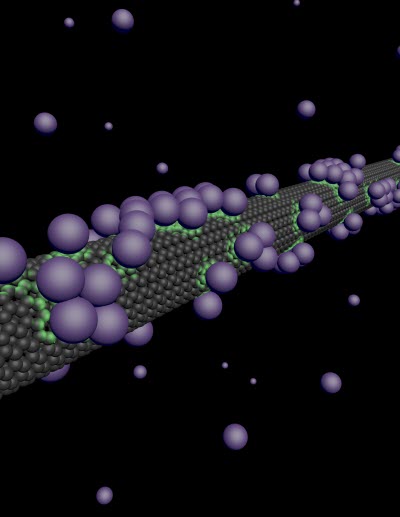 An illustration of atoms sticking to a carbon nanotube, affecting the electrons in its surface.Image credit: David Cobden and studentsA team led by David Cobden, UW professor of physics, used a carbon nanotube — a seamless, hollow graphite structure a million times thinner than a drinking straw — acting as a transistor to study what happens when gas atoms come into contact with the nanotube’s surface. Their findings were published in May in the journal Nature Physics.

Cobden said he and co-authors found that when an atom or molecule sticks to the nanotube a tiny fraction of the charge of one electron is transferred to its surface, resulting in a measurable change in electrical resistance.

“This aspect of atoms interacting with surfaces has never been detected unambiguously before,” Cobden said. “When many atoms are stuck to the miniscule tube at the same time, the measurements reveal their collective dances, including big fluctuations that occur on warming analogous to the boiling of water.”

“Various forms of carbon, including nanotubes, are considered for hydrogen or other fuel storage because they have a huge internal surface area for the fuel molecules to stick to. However, these technological situations are extremely complex and difficult to do precise, clear-cut measurements on.”

This work, he said, resulted in the most precise and controlled measurements of these interactions ever made, “and will allow scientists to learn new things about the interplay of atoms and molecules with a carbon surface,” important for improving technologies including batteries, electrodes and air filters.

Co-authors were Oscar Vilches, professor emeritus of physics, doctoral students Hao-Chun Lee and research associate Boris Dzyubenko, all of the UW. The research was funded by the National Science Foundation.