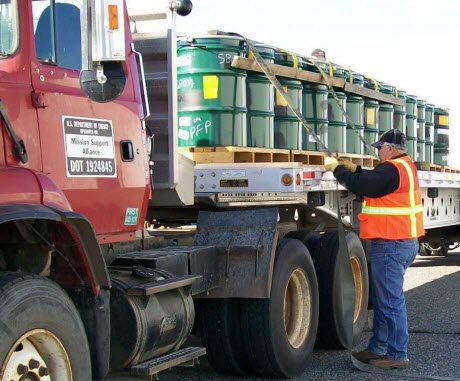 Securing a shipment of mixed, low-level waste from Hanford for treatment and disposal.Photo credit: U.S. Department of EnergyPhysicists at the U.S. Department of Energy's (DOE) Princeton Plasma Physics Laboratory (PPPL) are proposing a new way to process nuclear waste that uses a plasma-based centrifuge. Known as plasma mass filtering, the new mass separation techniques would supplement chemical techniques.  It is hoped that this combined approach would reduce both the cost of nuclear waste disposal and the amount of byproducts produced during the process.  This work was supported by PPPL's Laboratory Directed Research and Development Program.

"The safe disposal of nuclear waste is a colossal problem," said Renaud Gueroult, staff physicist at PPPL and lead author of the paper that appeared in the Journal of Hazardous Materials in October. "One solution might be to supplement existing chemical separation techniques with plasma separation techniques, which could be economically attractive, ideally leading to a reevaluation of how nuclear waste is processed."

The immediate motivation for safe disposal is the radioactive waste stored currently at the Hanford Site, a facility in Washington State that produced plutonium for nuclear weapons during the Cold War. The volume of this waste originally totaled 54 million gallons and was stored in 177 underground tanks.

Machinery to encase waste in glass

In 2000, Hanford engineers began building machinery that would encase the radioactive waste in glass. The method, known as "vitrification," had been used at another Cold War-era nuclear production facility since 1996. A multibillion-dollar vitrification plant is currently under construction at the Hanford site.

This vitrified waste is deposited into canisters that measure approximately 10 feet long and two feet in diameter. These canisters would be sent away to a federal repository where the radioactivity dissipates over thousands of years. The low-level waste by-product would be similarly, but less expensively, immobilized in a glass wasteform. This immobilized low-level waste would be disposed of at the Hanford Site.

To reduce the cost of high-level waste vitrification and disposal, it may be advantageous to reduce the number of high-level glass canisters by packing more waste into each glass canister.  To reduce the volume to be vitrified, it would be advantageous to separate the nonradioactive waste, like aluminum and iron, out of the waste, leaving less waste to be vitrified.  However, in its 2014 report, the DOE Task Force on Technology Development for Environmental Management argued that, "without the development of new technology, it is not clear that the cleanup can be completed satisfactorily or at any reasonable cost."

The high-throughput, plasma-based, mass separation techniques advanced at PPPL offer the possibility of reducing the volume of waste that needs to be immobilized in glass. "The interesting thing about our ideas on mass separation is that it is a form of magnetic confinement, so it fits well within the Laboratory's culture," said physicist Nat Fisch, co-author of the paper and director of the Princeton University Program in Plasma Physics. "To be more precise, it is 'differential magnetic confinement' in that some species are confined while others are lost quickly, which is what makes it a high-throughput mass filter."

How would a plasma-based mass filter system work? The method begins by atomizing and ionizing the hazardous waste and injecting it into the rotating filter so the individual elements can be influenced by electric and magnetic fields. The filter then separates the lighter elements from the heavier ones by using centrifugal and magnetic forces. The lighter elements are typically less radioactive than the heavier ones and often do not need to be vitrified. Processing of the high-level waste therefore would need fewer high-level glass canisters overall, while the less radioactive material could be immobilized in less costly wasteform (e.g., concrete, bitumen).

The new technique would also be more widely applicable than traditional chemical-based methods since it would depend less on the nuclear waste's chemical composition.While "the waste's composition would influence the performance of the plasma mass filter in some ways, the effect would most likely be less than that associated with chemical techniques," said Gueroult.

Gueroult points out why savings by plasma techniques can be important. "For only about $10 a kilogram in energy cost, solid waste can be ionized. In its ionized form, the waste can then be separated into heavy and light components. Because the waste is atomized, the separation proceeds only on the basis of atomic mass, without regard to the chemistry. Since the total cost of chemical-based techniques can be $2,000 per kilogram of the vitrified waste, as explained in the Journal of Hazardous Materials paper, it stands to reason that even if several plasma-based steps are needed to achieve pure enough separation, there is in principle plenty of room to cut the overall costs. That is the point of our recent paper. It is also why we are excited about our plasma-based methods."

Fisch notes that "our original ideas grew out of the thesis of Abe Fetterman, who began by considering centrifugal mirror confinement for nuclear fusion, but then realized the potential for mass separation. Now the key role on this project is being played by Renaud, who has developed the concept substantially further."

According to Fisch, the current developments are a variation and refinement of a plasma-based mass separation system first advanced by a private company called Archimedes Technology Group. That company, started by the late Dr. Tihiro Ohkawa, a fusion pioneer, raised private capital to advance a plasma-based centrifuge concept to clean up the legacy waste at Hanford, but ceased operation in 2006 after failing to receive federal funding.

Now an updated understanding of the complexity of the Hanford problem, combined with an increased appreciation of new ideas, has led to renewed federal interest in waste-treatment solutions. Completion of the main waste processing operations, which was in 2002 projected for 2028, has slipped by 20 years over the last 13 years, and the total cleanup cost is now estimated by the Department of Energy to be greater than 250 billion dollars, according to the DOE Office of Inspector General, Office of Audits and Inspections.  DOE, which has the responsibility of cleaning up the legacy nuclear waste at Hanford and other sites, conducted a Basic Research Needs Workshop on nuclear waste cleanup in July that both Fisch and Gueroult attended. The report of that workshop, which is expected to highlight new approaches to the cleanup problem, is due out this fall.