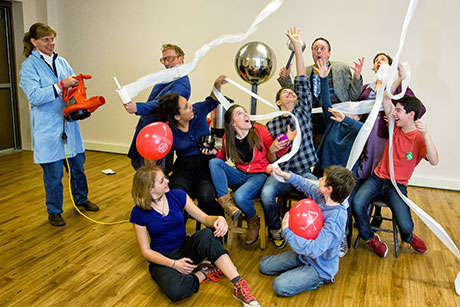 The idea for the play was sparked when the American Physical Society solicited creative ways to spread news and information about science, particularly physics. Hine sent the solicitation to Greene.

Greene was a natural fit: With degrees in physics, geology and atmospheric science, she had been headed for a career in science until a performance by Lampert inspired her to shift directions.

“In ‘Science Fair’ we didn’t have the wonderful connection with Cornell physics, so the science wasn’t as flashy and fun,” says Greene.

In the story, sixth-graders learn that “physics makes the world go ’round” when they organize the school’s first-ever physics fair. The cast features local middle and high school students; Hine and Herman make their theater debuts as physics fair judges.

“It’s part of our mission at Xraise to make science engaging and exciting for all ages,” says Herman, who along with Hine designed and built the physics demos for “Physics Fair” – the show’s “special effects.” The demonstrations cover such topics as angular momentum, simple machines, waves and the Bernoulli principle.

After the show, the audience will be invited on stage to ask questions of the cast (Hine and Herman will be on hand to field the harder questions).

“I am interested in kids embracing science, and theater is a great way to introduce people to all kinds of ideas,” says Greene, adding that her volunteer experience with Expanding Your Horizons [CU1] while a graduate student in geology had an impact on this interest. It also influenced the choice of a female character to push the science forward in the play.

Although the KTC run is only two performances, Xraise is committed to taking the show on the road as part of their goal of making science accessible to everyone. “This performance allows people to approach science in a nonthreatening and fun way,” says Hine. “I think the creative element to it will inspire people who might not otherwise be receptive to learning about science.”

“The play demystifies science," says Wittich. "It’s not just a spectacle that amazes; it also shows that a real understanding of science is something that’s within reach of anybody.”

“Physics Fair” is supported by a grant from the American Physical Society; additional support is provided by CLASSE.