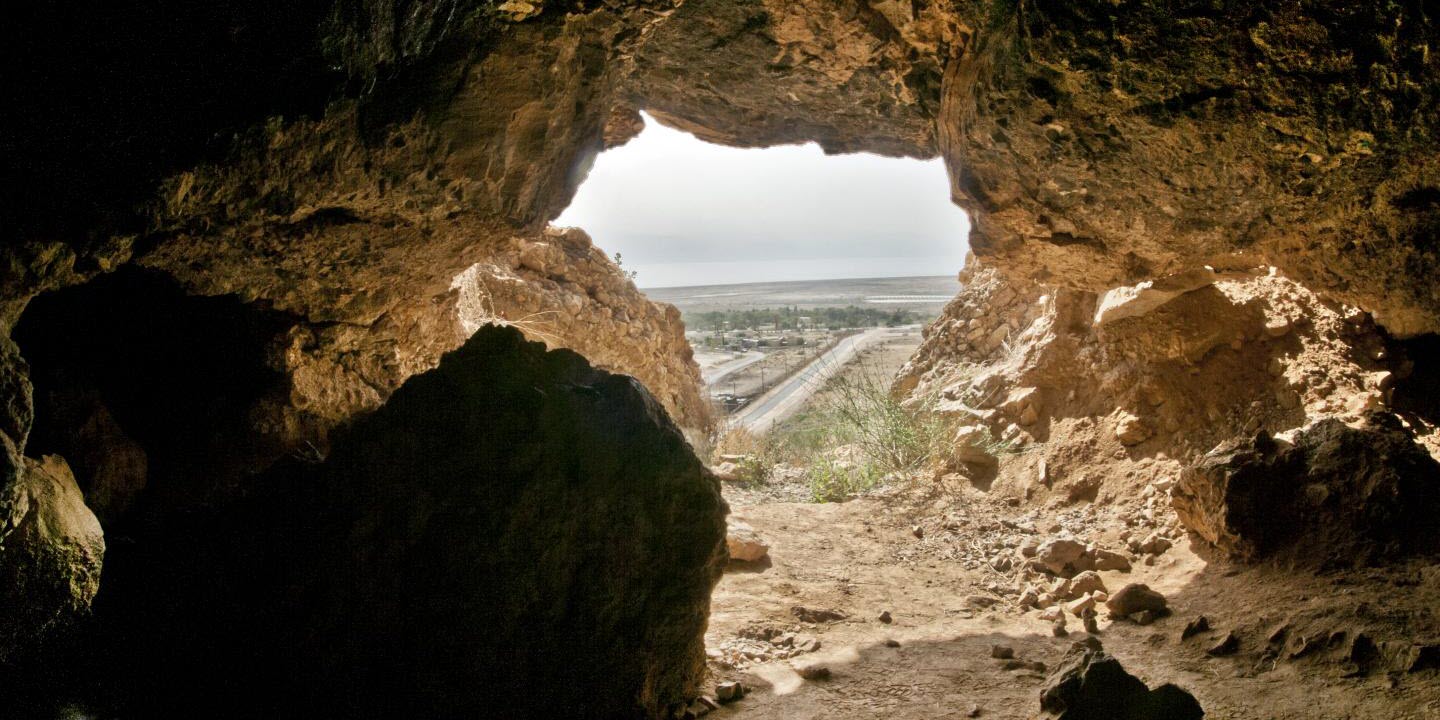 One of the Qumran caves where the Dead Sea Scroll fragments were found.
Courtesy of the Israel Antiquities Authority, Photographer Shai Halevi

The collection of more than 25,000 fragments of ancient manuscripts known as the Dead Sea Scrolls include, among other ancient texts, the oldest copies of books of the Hebrew Bible. But finding a way to piece them all together in order to understand their meaning has remained an incredibly difficult puzzle, especially given that most pieces weren't excavated in an orderly fashion. Now, researchers reporting in the journal Cell on June 2 have used an intriguing clue to help in this effort: DNA "fingerprints" lifted from the animal skins on which the texts were written.

"The discovery of the 2,000-year-old Dead Sea Scrolls is one of the most important archaeological discoveries ever made," says Oded Rechavi (@OdedRechavi) of Tel Aviv University in Israel. "However, it poses two major challenges: first, most of them were not found intact but rather disintegrated into thousands of fragments, which had to be sorted and pieced together, with no prior knowledge on how many pieces have been lost forever, or—in the case of non-biblical compositions—how the original text should read. Depending on the classification of each fragment, the interpretation of any given text could change dramatically."

The second challenge is that most of the scrolls were acquired not directly from eleven Qumran caves near the Dead Sea but through antiquity dealers. As a result, it's not clear where many of the fragments came from in the first place, making it that much more difficult to put them together and into their proper historical context.

Since their discovery, mainly in the late 1940s and 1950s, scholars tried to put them together like a jigsaw puzzle, relying primarily on visible properties of the fragments in order to learn about their relationship to other fragments. In the new study, Rechavi and colleagues including Noam Mizrahi, Tel Aviv University, Israel, and Mattias Jakobsson, Uppsala University, Sweden, decided to look deeper for clues. From each piece, they extracted ancient DNA of the animals that were used to make the parchments. Then, using a forensic-like analysis, they worked to establish the relationship between the pieces based on that DNA evidence and on scrutiny of the language within the texts under investigation.

The DNA sequences revealed that the parchments were mostly made from sheep, which wasn't known. The researchers then reasoned that pieces made from the skin of the same sheep must be related, and that scrolls from closely related sheep were more likely to fit together than those from more different sheep or other species.

The researchers stumbled onto an interesting case in which two pieces thought to belong together were in fact made from different animals—sheep and cow. It suggested they don't belong together at all. The most notable example came from scrolls that comprise different copies of the biblical, prophetic book of Jeremiah, which are also some of the oldest known scrolls. 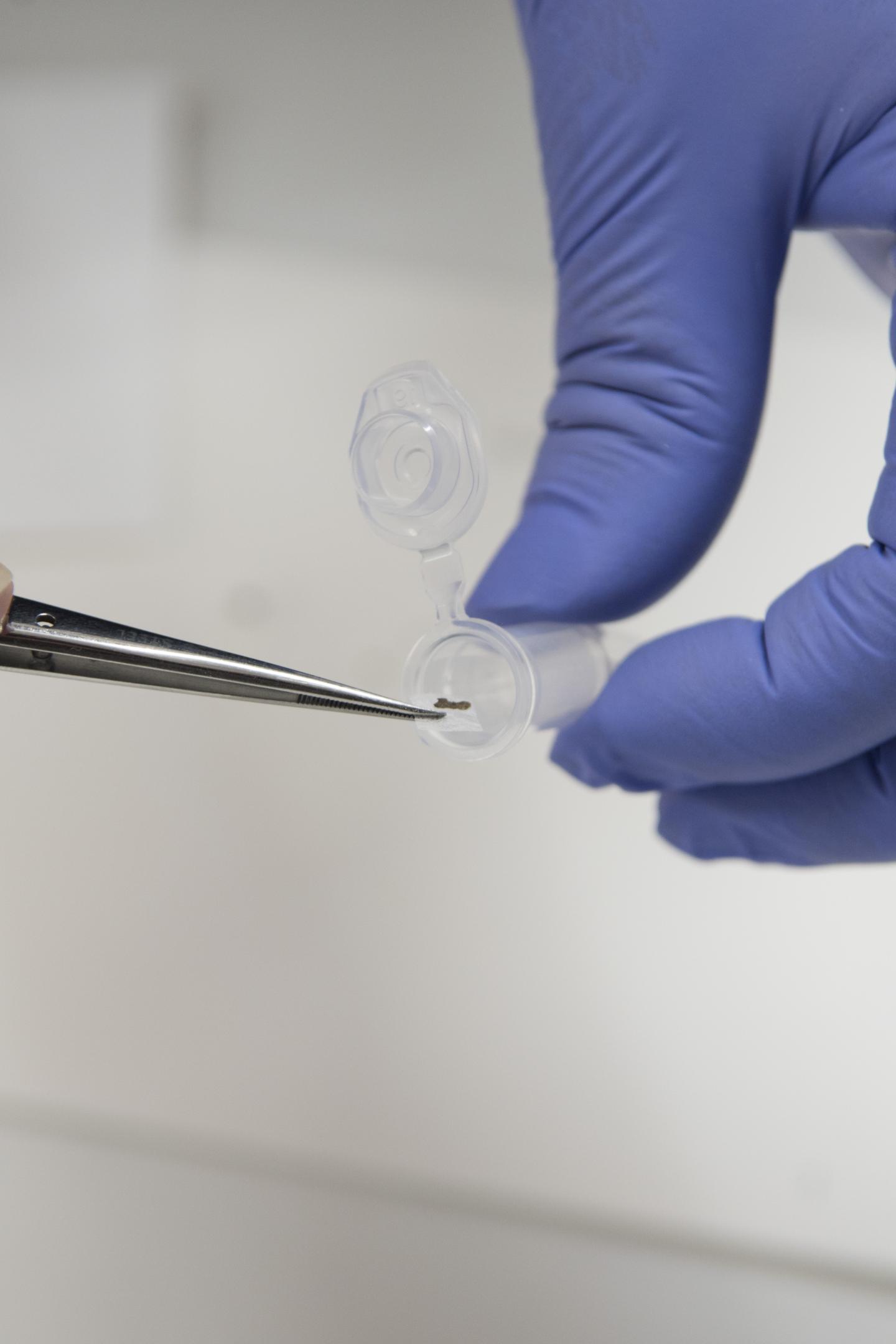 A tiny fragment of the scrolls being sampled for testing.
Courtesy of the Israel Antiquities Authority, Photographer Shai Halevi

"Analysis of the text found on these Jeremiah pieces suggests that they not only belong to different scrolls, they also represent different versions of the prophetic book," says Mizrahi. "The fact that the scrolls that are most divergent textually are also made of a different animal species is indicative that they originate at a different provenance."

Most likely, he explains, the cow fragments were written elsewhere because it wasn't possible to raise cows in the Judean desert. The discovery also has larger implications. The researchers write that the fact that different versions of the book circulated in parallel suggests that "the holiness of the biblical book did not extend to its precise wording." That's in contrast to the mutually exclusive texts that were adopted later by Judaism and Christianity, they note.

"This teaches us about the way this prophetic text was read at the time and also holds clues to the process of the text's evolution," Rechavi says.

Other highlights include insight into the relationship among different copies of a non-biblical, liturgical work known as the Songs of the Sabbath Sacrifice, found in both Qumran and Masada. The analysis shows that the various copies found in different Qumran Caves are closely related genetically, but the Masada copy is distinct. The finding suggests that the work had a wider currency in the period.

"What we learn from the scrolls is probably relevant also to what happened in the country at the time," Mizrahi says. "As the Songs of the Sabbath Sacrifice foreshadows revolutionary developments in poetic design and religious thinking, this conclusion has implications for the history of Western mysticism and Jewish liturgy."

The evidence also confirmed that some other fragments of uncertain origin likely came from other places and not the Qumran caves. In one case, the DNA evidence suggests a fragment from a copy of the biblical book of Isaiah—one of the most popular books in ancient Judea—likely came from another site, which suggests to the researchers the potential existence of an additional place of discovery that still awaits identification.

Although the DNA evidence adds to understanding, it can only "reveal part of the picture and not solve all the mysteries," Rechavi says. The researchers had to extract DNA from tiny amounts of materials—what they refer to as scroll "dust" in certain cases—and say there are also many scrolls that have yet to be sampled and others that can't be, for fear it might ruin them.

Nevertheless, the researchers hope that more samples will be tested and added to the database to work toward a more complete Dead Sea Scroll "genome." They now think they can apply the same methods to any ancient artifact that contains enough intact DNA or perhaps other biological molecules.