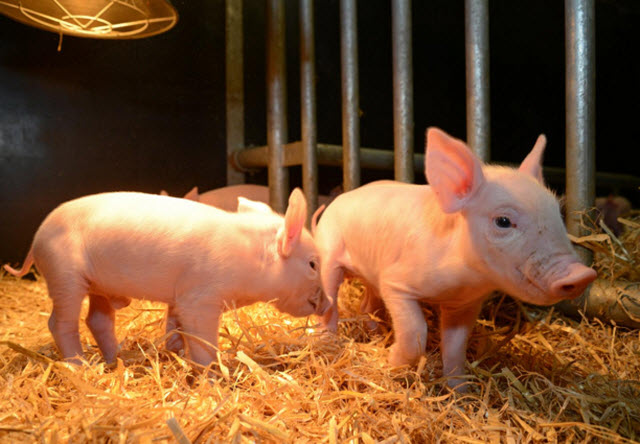 Researchers at the University of Edinburgh's Roslin Institute have used gene-editing techniques to produce pigs that are potentially resilient to African Swine Fever. The team have changed five letters of the animals' DNA code to give them a variant of a gene that is usually carried by warthogs. It is the first time researchers have successfully swapped alleles in an animal's genetic code using gene editing.Image Courtesy of: Norrie Russell, The Roslin Institute, University of Edinburgh

Researchers have made an advance in the fight against a deadly virus that affects pigs.

The team used advanced genetic techniques to produce pigs that are potentially resilient to African Swine Fever -- a highly contagious disease that kills up to two-thirds of infected animals.

The new pigs carry a version of a gene that is usually found in warthogs and bush pigs, which researchers believe may stop them from becoming ill from the infection.

African Swine Fever is spread by ticks. When standard farmed pigs are infected, they quickly become ill and die, but warthogs and bush pigs show no disease symptoms when infected.

The research is focused on one of the pig genes associated with African Swine Fever Virus infection called RELA. The gene causes the immune system to overreact with devastating effects.

Warthogs and bush pigs carry a different version of the RELA gene from that found in farmed pigs. Scientists believe that this variant-known as an allele-may dampen their immune response and explain why they are more resilient to African Swine Fever.

Researchers at the University of Edinburgh's Roslin Institute used a gene-editing technique to modify individual letters of the pigs' genetic code. By changing just five letters in their RELA gene, they converted it to the allele that is found in the warthog.

The work builds on previous research from the team, which used similar techniques to produce pigs with a single letter of their genetic code altered. These animals produce a shorter version of RELA.

All of these changes to the pig's genetic code could have occurred spontaneously in nature.

Scientists will now conduct controlled trials to test whether the genetic changes have improved the pigs' resilience to the disease.

African Swine Fever is endemic in Sub-Saharan Africa and some areas of Russia. The disease has never been found in the UK, although recent outbreaks in Eastern Europe have raised concerns amongst farming groups that it could spread.

The study-published in the journal Scientific Reports-involved collaboration between scientists at The Roslin Institute and Sangamo Biosciences Inc. It was funded by Genus plc and the Biotechnology and Biological Sciences Research Council (BBSRC). The Roslin Institute receives strategic support from the BBSRC.

Professor Bruce Whitelaw, Head of Developmental Biology at the University of Edinburgh's Roslin Institute, said: "Our goal is to improve the welfare of farmed pigs around the world, making them healthier and more productive for farmers."