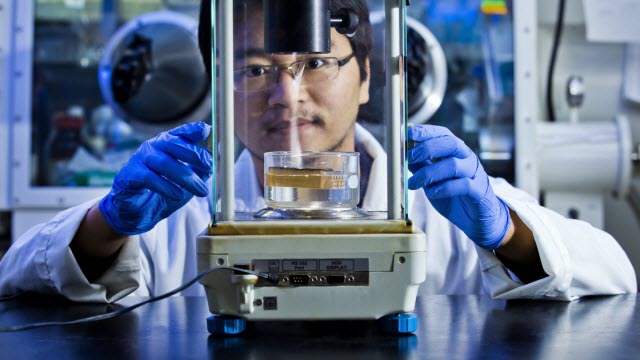 The solar steam device being tested in the Hu Lab.Photo credit: University of Maryland

Engineers at the University of Maryland have found that porous types of wood from trees like poplar and pine can greatly increase the efficiency of water-to-steam conversion under sunlight. The findings, published November 15 in the journal Joule, could be used in a simple and inexpensive biodegradable device for water purification.

"I think there are many, many materials that can be used in solar steam generation, but wood really stands out in terms of performance as well as cost," says senior author Liangbing Hu, associate professor of materials science and engineering in the A. James Clark School of Engineering and the University of Maryland Energy Innovation Institute. 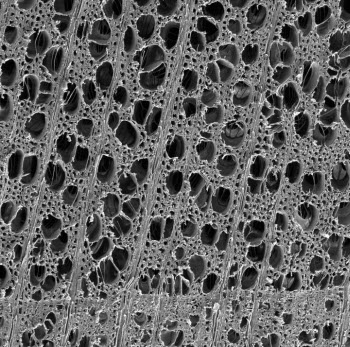 A microscopy image of poplar wood showing its porous properties.Image credit: Hu Lab / University of MarylandPeople have been harnessing the sun's energy to purify water for thousands of years, but in light of the freshwater shortages faced by many regions, there is increasing interest in developing technologies that use this simple technique to meet the world's demand for drinkable water. The process, called "solar steam generation," involves running water through a material or device that is heated by sunlight. The water evaporates into steam, leaving salt and contaminants behind.

While different materials can be used, including graphite and copper nanotubes, Hu and his team found wood to be effective—but not all types of wood are equal. Of the species they evaluated, the more porous types like pine and poplar were most efficient. They observed that denser species, like the tropical hardwood cocobolo, generate steam at a slower rate since they have fewer pores through which water can travel. "In our case, you just take a piece of wood and burn the surface. That's it," he says. 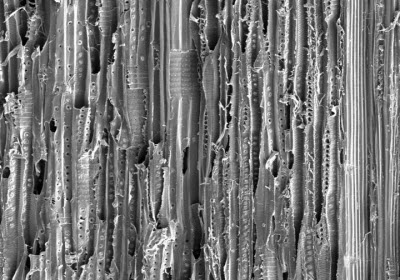 A microscopy image of pine wood, showing its porous properties.Image credit: Hu Lab / University of MarylandHu and his team have been exploring different types of wood as solar steam generation devices. They tested the solar steam generation efficiency of wood blocks with a range of densities, each the size of the palm of a hand and only 1 or 2 mm thick. To darken the wood so it could better absorb heat from the sun, they carbonized (burned) the top of each block, and then they measured the rate at which water traveling through the wood was converted into steam. They found that elements of the wood's structure helped facilitate the process efficiently, with microscopic pores and larger channels allowing water to flow quickly and continuously to the sun-heated surface.

The researchers believe these same structural elements make wood a superior material for generating clean freshwater from seawater. A common problem with other materials is that salt deposits begin to build up inside the device as water evaporates, which blocks the water's pathway to the top and prevents further evaporation. Since the channels inside of wood run straight up and down, salt deposits can simply dissolve back into the water below without blocking the way.

Hu believes that porous wood has the potential to generate freshwater on a large scale sometime in the near future. He envisions wooden solar steam generation devices being used in water treatment plants across regions with plenty of saltwater and sunshine, from California to Singapore to Saudi Arabia.

"We are trying to push this technology further for use as a product, eventually, for addressing water issues with high efficiency," Hu says.