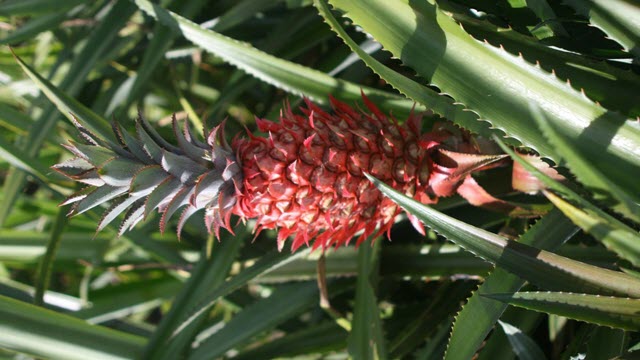 As their Latin name indicates, pineapples are truly "excellent fruits"—and thanks to a freshly completed genome sequencing project, researchers have gained a new understanding of how human agriculture has shaped the evolution of this and other crops.

An international team led by Ray Ming, University of Illinois professor of plant biology and member of the Carl R. Woese Institute for Genomic Biology, published their analysis of the genome of the red pineapple, a plant grown for fiber production and as an ornamental, in Nature Genetics. They also examined new sequence data for other key cultivars of pineapple grown for fruit, leading to new insights into the genetic responses of the plant to centuries of domestication and cultivation. In particular, the work supported the hypothesis that domestication of crops that are propagated without using seeds, through cuttings or other means, can be domesticated in a single step.

"We have chosen major pineapple cultivars worldwide...to test our hypothesis of 'one-step operation' in domestication of clonally propagated crops," Ming said. He highlighted this aspect of the researchers' work as one of the primary goals of the study.

Pineapples are a little bit exotic yet pleasingly familiar; large, spiky fruits with sweet, juicy yellow flesh. The newly sequenced variety of this study, Ananas comosus var. bracteatus, is different from this standard grocery store variety. It produces a small fruit that is not suitable for consumption and is grown in gardens for decoration or to form a security hedge. Unlike many cultivars of pineapple, it is able to self-pollinate.

Ming and his colleagues sequenced and assembled the red pineapple genome, using the genome of previously sequenced fruit pineapple as a reference and comparator. They also re-sequenced the genomes of 89 pineapple accessions (samples of plant tissue) from multiple cultivars. By comparing similarities and differences in DNA sequence across different types of pineapple, they were able to trace how natural and artificial selection shaped key traits and established distinct varieties.

Pineapple plants can be grown from vegetative tissues, such as the leafy top of a fruit, a slip, or a sucker. The team hypothesized that for some cultivars, domestication might have been achieved in a single step—starting a variety with a cutting from a likely plant—rather than over years of breeding. They developed a novel bioinformatic method that looked for long strings of similar sequence at the ends of chromosomes.

"To our surprise and delight, extensive terminal runs of homozygosity [similarity] were detected in cultivar 'Singapore Spanish'," Ming said. He explained that this discovery was best explained by many years of exclusive clonal propagation: "One sexual recombination could interrupt terminal runs of homology formed over thousands of years. This novel method can be applied to study domestication history of other clonally propagated crops such as potato, sugarcane, cassava, banana, and many tree fruit crops."

Comparison across genomes also allowed Ming and his coauthors to identify genes that support traits distinguishing different cultivars. For example, differing activity levels of multiple genes appear to support higher leaf fiber production in the red pineapple, and the sweetness of a particular cultivar of fruit pineapple is likely related in part to selection on a particular sugar transporter gene. The study also yielded additional evidence for the involvement of certain genes in allowing or prohibiting self-pollination.

Overall, Ming said he was most excited to find strong support for the idea that with clonal propagation, some plants were immediately and successfully domesticated.