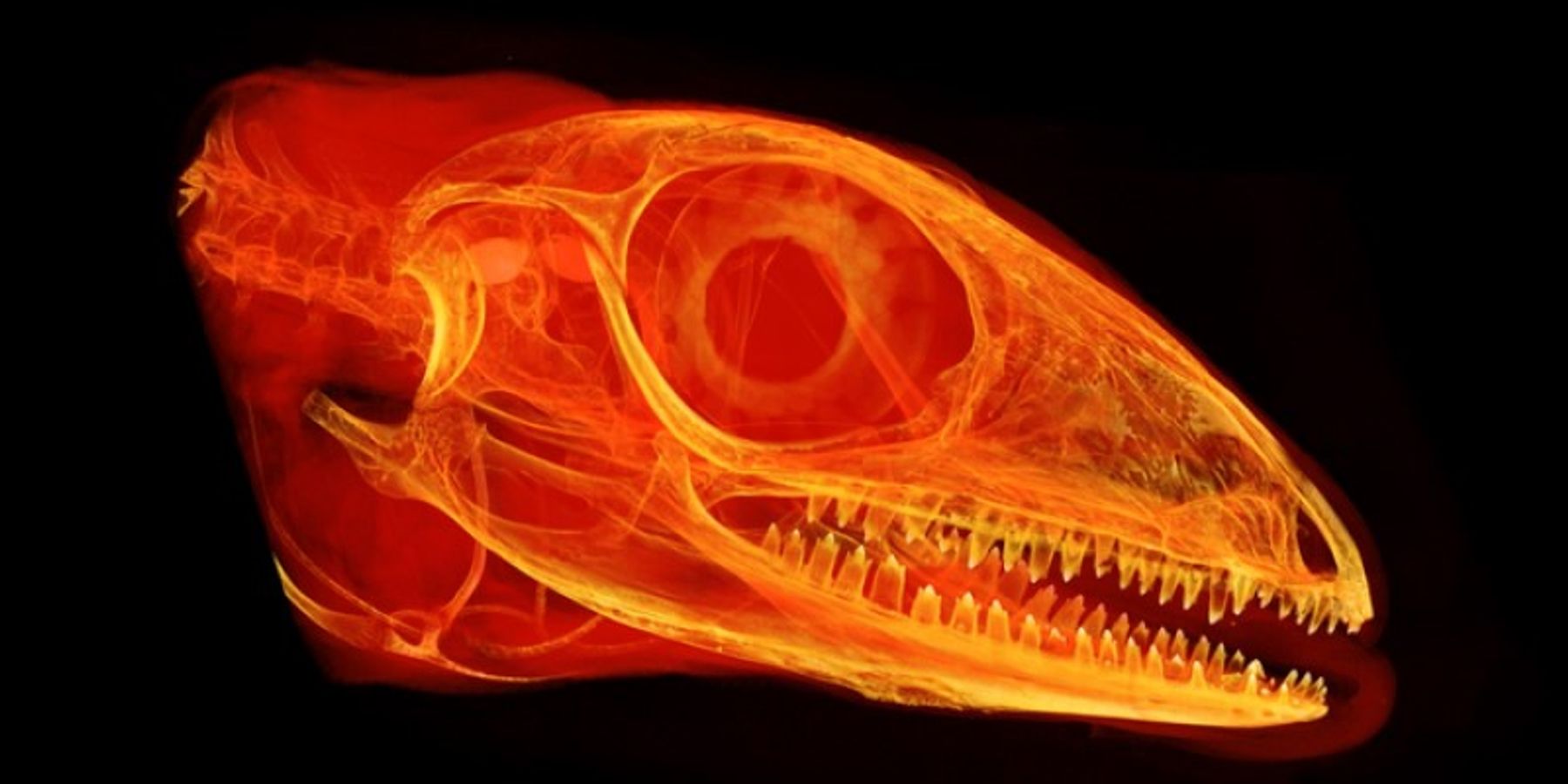 3D reconstruction of the skull of an Amazon racerunner (Ameiva ameiva) captured through an X-ray micro-CT scan. Complex teeth with multiple tips (cusps) are visible on the jaws. This feature—also seen in the dentition of early mammals—evolved many times in independent lizard groups.
Fabien Lafuma, University of Helsinki

Researchers at the Universities of Helsinki and Lyon and the Geological Survey of Finland found that complex teeth, a hallmark of mammals, also evolved several times in reptiles, prompting the evolutionary success of plant-eating lizards. However, contrary to mammals their tooth evolution was not unidirectional.

Scientists have richly documented the connection of tooth shape and diet in mammals, showing very diverse teeth fueled their evolutionary success. But what about other toothed animals? The authors chose to study squamates, the group including lizards and snakes. “The teeth of squamates have received limited attention, even though they twice outnumber mammals in species numbers, and span many habitats and geographic ranges,” remarks Nicolas Di-Poï, associate professor at the Institute of Biotechnology, University of Helsinki.

The researchers performed comparative analyses on tooth shape and diet data for more than 500 living and fossil species. They found the ancestor to all snakes and lizards had simple peg-like teeth and fed on insects. Later, complex teeth bearing multiple cusps—similar to those of early mammals—evolved multiple times independently in different lizard lineages. The appearance of multiple-cusped teeth allowed some lizard groups to evolve more plant-rich diets, sometimes leading to even more complex teeth.

The team also found that complex teeth and plant consumption provided an evolutionary advantage, as both traits favored the appearance of new species. However, many lizard lineages also lost complex teeth to re-evolve the ancestral simple tooth morphology. “This came as a complete surprise,” says PhD candidate Fabien Lafuma from the University of Helsinki, “as complex teeth appear as a critical innovation for both squamates and mammals.”

The study suggests that all land-living vertebrates experience the same selective pressures for more cusps to increase plant consumption. Nevertheless, fundamental differences make squamates stand out. Contrary to mammals, tooth evolution was not unidirectional, and numerous lineages reduced complexity over time. This difference could stem from variations in tooth development, showing that minor molecular changes may produce widely different outcomes over evolutionary time scales. Lafuma concludes, “this work gives us a more nuanced understanding of how the same critical adaptation evolved in different vertebrate groups.”