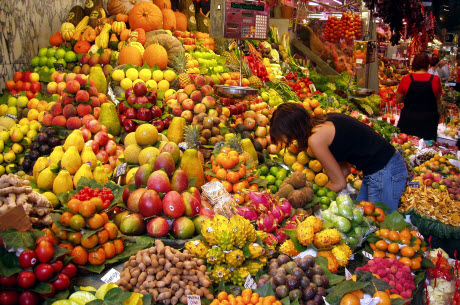 A recent study of how air plasma interacts with bacterial biofilms on an apple’s surface suggests that plasma technology could be used to decontaminate food in the future.Daderot, Wikimedia CommonsNewswise — WASHINGTON, D.C. — Seeing fruit “turn bad and going to waste” inspired a team of researchers in China to explore using atmospheric pressure nonequilibrium plasma—already widely used for medical purposes—as a novel solution to extend the shelf life of fruit and other perishable foods.

When bacteria attaches to food surfaces, it can extract nutrients and continue to proliferate in the form of “biofilms.” Bacterial biofilms on food and food-processing surfaces diminish the food's quality and safety.

But plasma sources are capable of killing bacteria such as Salmonella and E.coli on apples, as well as other types of spoilage microorganisms on mangos and melons, and Listeria on meat.

Now, researchers from China’s Shanghai Jiao Tong University and Huazhong University of Science and Technology report this week in the journal Physics of Plasmas, from AIP Publishing, about their computational study of how air plasma interacts with bacterial biofilms on an apple’s surface suggests that plasma technology could be used to decontaminate food in the future.

The fundamental concept behind the team’s work is to harness the reactive species generated by plasma to kill bacterial biofilms, which are notoriously difficult to wipe out.

“A biofilm consists of groups of microorganisms in which cells stick to each other, and these cells often adhere to a surface,” explained Xinpei Lu, a professor in the College of Electrical and Electronic Engineering at Huazhong University of Science and Technology. “These adherent cells are frequently embedded within a self-produced matrix of extracellular polymeric substance, which forms in different shapes and acts to protect the bacteria.”

For this work, the team simulated how the structure of the biofilm affects the discharge dynamics and then zeroed in on how the reactive species generated by the plasma are distributed on the biofilm’s surface—because it can later kill the bacteria within the biofilm.

“These free radicals can quickly overwhelm the natural defenses of living organisms, which leads to their destruction,” he added.

Because plasma can easily produce more than a trillion free radicals per cubic centimeter of volume, it can serve as an efficient decontamination agent.

“Free radicals are one type of germ-killing agent generated via plasmas,” Lu pointed out. “Plasmas also produce other agents such as ultraviolet light, which sterilizes by causing DNA damage.”

Scientists previously observed that bacterial cell membranes sometimes rupture when exposed to plasma. This may be caused by charged particles attaching to the outer surface of the cell—inducing an electrostatic force that can overcome the tensile strength of the cell’s membrane by rupturing it.

So the team decided to explore how plasma interacts with biofilms and how the reactive species generated by the plasma are able to penetrate the cavity of the biofilm.

“Technically, we wanted to simulate the discharge (in millimeter gap distance) while capturing the effect of the biofilm’s mushroom shape (within a micrometer range)—an extremely challenging task,” said Lu.

What did they find?

In terms of applications, the team’s work indicates that air plasma can be used to kill bacteria within biofilms, which could “significantly prolong the amount of time fruit remains edible,” said Lu. Such a technique could be on the market within a few years, “once a low-cost plasma source is developed.”

The next step toward using low-temperature plasma technology for the decontamination of fruit is “to generate a uniform plasma over the irregular surface of the fruit, or to use a plasma jet to scan the surface of the fruit,” Lu noted. “We’re currently working on the latter method to achieve this goal.”