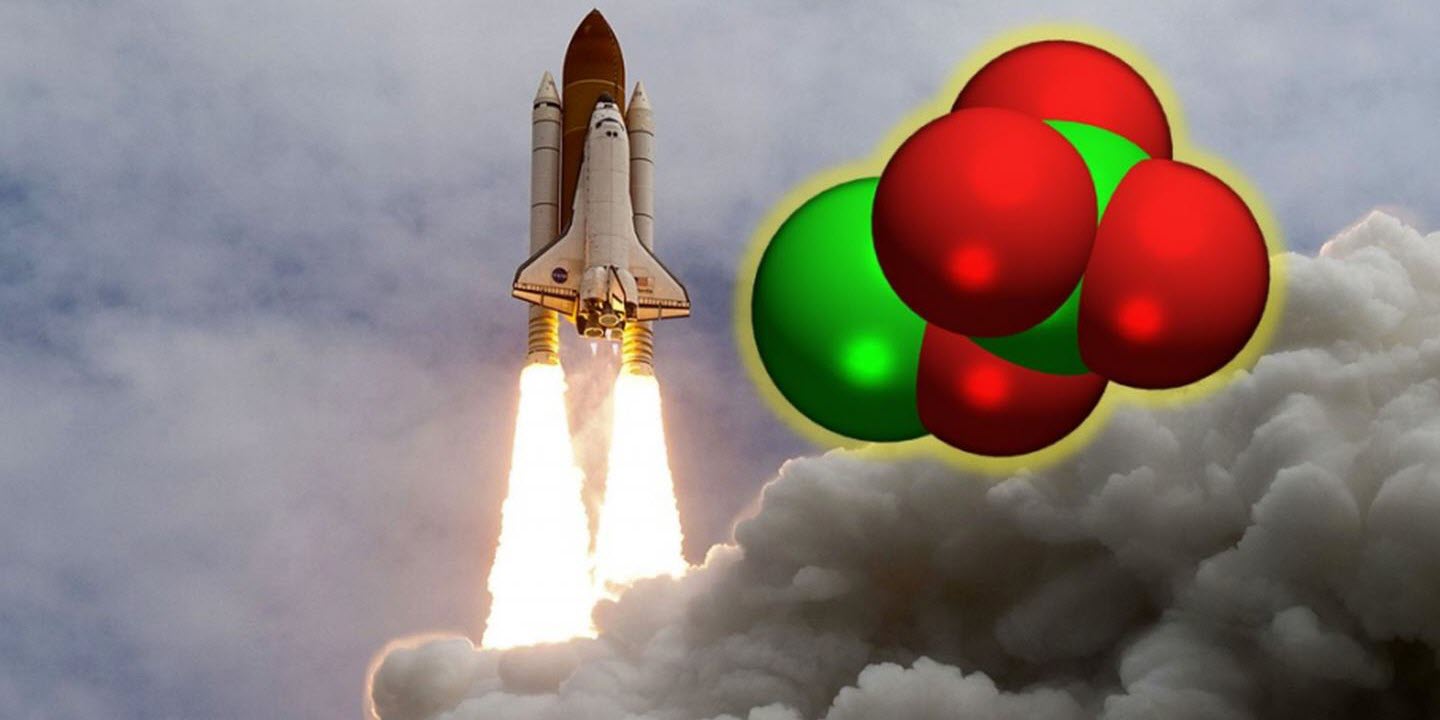 Perchlorate, a chemical compound used in rocket fuels (such as the Space Shuttle's solid propellant seen here during the program's final launch in 2011) and other materials, may be a more hazardous pollutant than previously thought.
M.E. Newman, Johns Hopkins Medicine, using NASA and public domain images

Sometimes toxins, such as hazardous wastes and industrial byproducts, seep into groundwater, the source of our drinking water. One such pollutant is perchlorate, a chemical compound used in rocket fuels, fireworks, fertilizers, and other materials. The compound is thought to contribute to health issues in humans such as hypothyroidism, the decreased production of hormones from the thyroid gland, which can impact development.

In a new study published May 25, 2020, in the journal Nature Structural & Molecular Biology, researchers at Johns Hopkins Medicine, Vanderbilt University and the University of California, Irvine, report on the mechanism that perchlorate uses to impact and damage normal functioning of the thyroid gland.

The findings, they say, suggest that an acceptable safe concentration of perchlorate in drinking water is 10 times less than previously thought.

The researchers focused on how perchlorate blocks a main route by which iodide, the negatively charged form of the element iodine, enters thyroid cells. Iodide helps the thyroid make hormones that are essential to the body's regulation of metabolism, temperature and other important functions.

Related Article: Rush Hour Pollution May Be More Dangerous Than You Think

Thyroid cells control the incoming flow of iodide by using a protein channel called the sodium/iodide symporter, also known as the Na+/I- symporter or NIS. Like other cellular transport systems, a "lock-and-key" approach is used to move iodide, with NIS acting as the lock and sodium as the key. Sodium fits into NIS at two binding sites to unlock the channel, enabling iodide to pass through and accumulate inside a thyroid cell.

The team, led by L Mario Amzel, PhD, professor of biophysics and biophysical chemistry at the Johns Hopkins University School of Medicine, and Vanderbilt University researcher Nancy Carrasco, MD, determined that perchlorate blocks the channel by latching onto the NIS protein and changing its shape. Less sodium binds to the misshaped channel, thereby significantly lowering the amount of iodide that can be moved inside thyroid cells.

The researchers studied how varying concentrations of perchlorate affects iodide transport by first growing thyroid cells that expressed the gene SLC5A5, which encodes the instructions for building NIS channels. Next, perchlorate and radioactive iodine were placed outside of some of the cells and just radioactive iodine outside the others. Finally, the researchers tracked how much glowing iodide was allowed to enter the cells in both groups. They found that there was much less iodide inside thyroid cells treated with perchlorate than in untreated ones, even at very low concentrations of the chemical.

In May 2020, the US Environmental Protection Agency (EPA) ruled not to place regulations on the amount of perchlorate that can be allowed in drinking water. The findings from the new study strongly suggest that this environmental pollutant is more hazardous than previously thought, raising serious concern about the decision.

"We hope that these findings will prompt the EPA to change its mind," Amzel says.