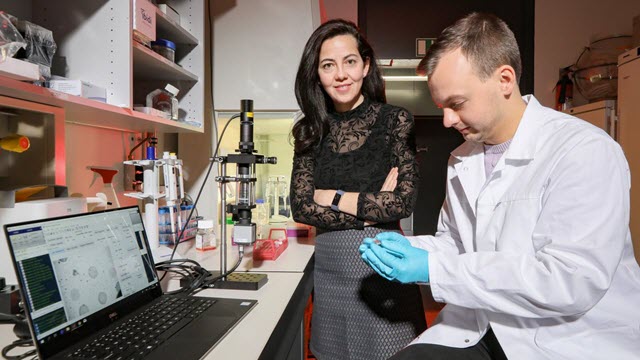 Sepsis claims one life every four seconds. It is the primary cause of death in hospitals, and one of the ten leading causes of death worldwide. Sepsis is associated with the body's inflammatory response to a bacterial infection and progresses extremely rapidly: every hour that goes by before it is properly diagnosed and treated increases the mortality rate by nearly eight percent. Time is critical with sepsis, but the tests currently used in hospitals can take up to 72 hours to provide a diagnosis.

Many scientists are working on this critical issue, including those at Abionic, an Ecole Polytechnique Fédérale de Lausanne (EPFL) spin-off. Researchers at the Laboratory of Bionanophotonic Systems (BIOS) at EPFL's School of Engineering have just unveiled a new technology. They have developed an optical biosensor that slashes the sepsis diagnosis time from several days to just a few minutes. Their novel approach draws on recent developments in nanotechnology and on light effects at a nano scale to create a highly portable, easy-to-use device that can rapidly detect sepsis biomarkers in a patient's bloodstream. And their device takes just a few minutes to deliver a result, like a pregnancy test.

Because the biosensor uses a unique plasmonics technology, it can be built from small, inexpensive components, yet it can achieve an accuracy on par with gold-standard laboratory methods. The device can screen a large panel of biomarkers and be adapted for the rapid diagnosis of a number of diseases. It was installed at Vall d'Hebron University Hospital in Spain and used in blind tests to examine patient samples from the hospital's sepsis bank. The researchers' technology is patent-pending, and their findings were recently published in Small. 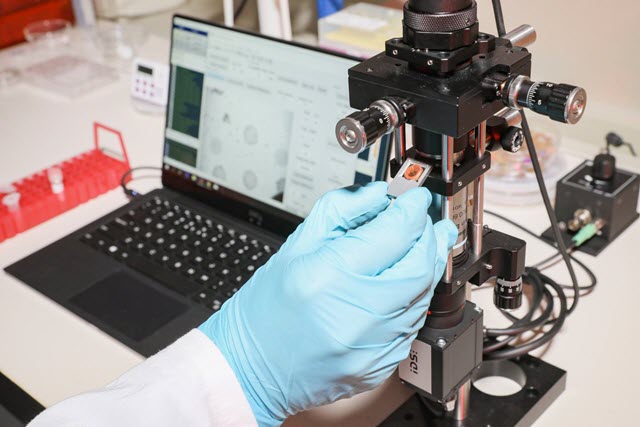 The new device can detect biomarkers of sepsis in a few minutes.Credit: © Alain Herzog / EPFL 2020

The device employs an optical metasurface—in this case a thin gold sheet containing arrays of billions of nanoholes. The metasurface concentrates light around the nanoholes so as to allow for exceptionally precise biomarker detection. With this type of metasurface, the researchers can detect sepsis biomarkers in a blood sample with nothing more than a simple LED and a standard CMOS camera.

The researchers begin by adding a solution of special nanoparticles to the sample that are designed to capture the biomarkers. They then distribute this mixture on the metasurface. "Any nanoparticles that contain captured biomarkers are trapped quickly by antibodies on the nanoholes," says Alexander Belushkin, the lead author of the study. When an LED is applied, those nanoparticles partially obstruct the light passing through the perforated metasurface. "These nano-scale interactions are imaged by the CMOS camera and digitally counted in real-time at high precision," says Filiz Yesilkoy, the study's co-author. The generated images are used to rapidly determine whether disease biomarkers are present in a sample and, if so, in what concentration. They used the new device to measure the blood serum levels of two important sepsis relevant biomarkers, procalcitonin and C-reactive protein. Doctors can use this information to accelerate the triage of sepsis patients, ultimately saving lives.

"We believe our low-cost, compact biosensor would be a valuable piece of equipment in ambulances and certain hospital wards," says Hatice Altug, the head of BIOS. Scientists already have possible applications in mind. "There is an urgent need for such promising biosensors so that doctors can diagnosis sepsis accurately and quickly, thereby keeping patient mortality to a minimum," say Anna Fàbrega and Juan José González, lead doctors at Vall d'Hebron University Hospital.