A new method for predicting bread loaf volume without baking has earned a team of South Dakota State University scientists a research award from the American Association of Cereal Chemists International. 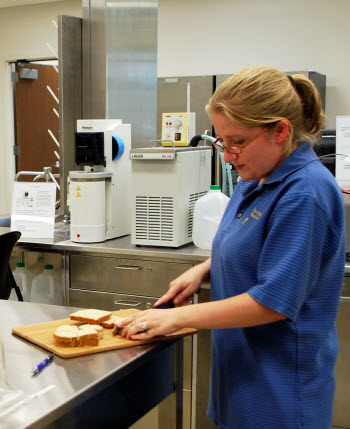 “It’s a shortcut,” she said. “What once took 11 equations to calculate, now takes one.”

The results were published last year in the Cereal Chemistry journal.

The researchers will receive the Texture Technologies Quality Research award for Best Paper at the annual meeting Oct. 23-36 in Savannah, Georgia. They will be presented with a plaque and a $1,000 honorarium.

“It’s a very big deal,” said Krishnan, who advocates testing wheat cultivars during the breeding process for baking quality. “This speaks to the caliber of the basic and applied food research conducted in the crop quality lab.”

Kindelspire said, “It’s nice to know that peers in the industry think it’s an important piece of work and has value in terms of research.”

“The holy grail of the baking industry is loaf volume—the bigger the volume, the better,” Krishnan said. For the project, the food scientists examined 19 genotypes of hard white and red spring wheat grown in several years at six South Dakota locations.

Evaluating new wheat cultivars is difficult because the amount of grain is limited. “We don’t have a lot of flour,” Kindelspire noted.

“To get good volume, you need to look at the air cells inside the dough,” Krishnan explained. Kindelspire pointed out, “It’s all about bubbles.”

Sifting the flour, mixing it with water and kneading incorporate air into the dough—this process creates a majority of the bubbles. “People think that the yeast does all the work,” Krishnan said, but the yeast only produces the carbon dioxide that fills the bubbles.

It’s the chemistry happening in the flour-water mixture via the gluten and starch—the matrix being formed, he explained. “We’re trying to optimize those factors that create a cohesive dough, balancing strength and elasticity to make the best loaves.”

Kindelspire discovered a correlation between the dough's ability to stretch and the stability of the walls of the gas-filled bubbles. “I found a relationship between dough extensibility and how it relates to strain hardening,” she said. “A higher strain hardening index is better for loaf volume.”

Researchers can now use this simplified process to tell the breeders which wheat varieties have better baking potential. “Breeders want me to look at the flour and tell them if this variety is good—now we have a faster way of doing that,” Krishnan said.

“This shortcut works based on the data that I had,” Kindelspire added. “It will be interesting to see if it can be used in labs from other countries.”