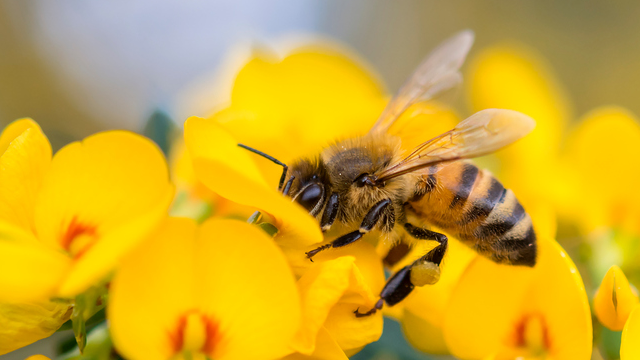 LONDON, ON — In a new study from Lawson Health Research Institute (Lawson) and Western University, researchers have shown that probiotics can potentially protect honey bees from the toxic effects of pesticides.

Honey bees are critical to agriculture as they pollinate approximately 35 per cent of the global food crop, contributing an estimated $4.39 billion per year to the Canadian economy. Pesticides are currently used to maximize crop yields, but the most common pesticides, neonicotinoid insecticides, are a major factor in colony collapse disorder which is killing honey bee populations.

"The demise of honey bees would be disastrous for humankind. A current dilemma in agriculture is how to prevent bee decline while mitigating crop losses," says Dr. Gregor Reid, director for the Canadian Centre for Human Microbiome and Probiotic Research at Lawson, and professor at Western's Schulich School of Medicine & Dentistry. "We wanted to see whether probiotics could counter the toxic effects of pesticides and improve honey bee survival."

The study was performed by trainees Brendan Daisley and Mark Trinder in Dr. Reid's lab at St. Joseph's Hospital in London, Ontario. The researchers utilized fruit flies as a well-known model for studying pesticide toxicity in honey bees. Both insects are affected similarly by neonicotinoids, have very similar immune systems, and share many common microbes present in their microbiota—the collection of microorganisms found in each insect.

The researchers found that fruit flies exposed to one of the world's most commonly used pesticides, imidacloprid (IMI), experienced changes to their microbiota and were more susceptible to infections. The flies were exposed to a comparable amount of pesticide as honey bees in the field.

By administering a specific strain of probiotic lactobacilli, survival among fruit flies exposed to the pesticide improved significantly. The mechanism involved stimulating the immune system through a pathway that insects use to adapt to infection, heat and other stresses.

Over the winter months, honey bee mortality has been steadily increasing with ranges of 38 to 58 per cent in recent years, two to three times higher than the sustainable level. In Ontario alone, 340 bee keepers reported an abnormally high number of bee deaths, with over 70 per cent of dead bees testing positive for neonicotinoid residues (Government of Ontario).

"While cessation of pesticide use would be ideal, farmers currently have little alternative to obtain the yields that keep their businesses viable," says Dr. Reid. "Until we can cease using pesticides, we need to find ways to protect humans and wildlife against their side effects. Probiotics may prove as an effective protective intervention against colony collapse disorder."

The researchers hope to further study the mechanisms involved in this process and perform field tests on honey bee populations in Ontario.