Photo courtesy of Benedictine UniversityLisle, Illinois--Eggs. We eat them, decorate them and collect them.

But what if we could use eggs to go “back to the future” and find out what happened in the past that has affected and possibly is still affecting our current and future environment?

Monica Tischler, PhD, professor of Biology at Benedictine University, has solved this time paradox in a way that fully preserves historical artifacts. Except she didn’t use a specially fitted DeLorean. She used X-rays.

But it wasn’t just any ordinary X-rays. It was X-rays from one of the world’s most powerful sources–the Advanced Photon Source at Argonne National Laboratory. Tischler is one of many researchers using the U.S. Department of Energy’s (DOE) $467 million X-ray machine. The DOE reports that scientists from around the world go to Argonne to conduct potentially groundbreaking research.

The renowned laboratory is only a few miles from Benedictine, allowing Tischler the opportunity to break new ground without breaking the treasured, rare eggs she used to assess past environmental living conditions of native animals from across the United States.

Typically, researchers have to destroy their egg specimens by crushing them into fine particles so they can more easily examine the material. Doing so gives researchers a window into changes in the environment that can possibly predict future environmental changes including some that could prove hazardous to the Earth, as well as animal and human life. 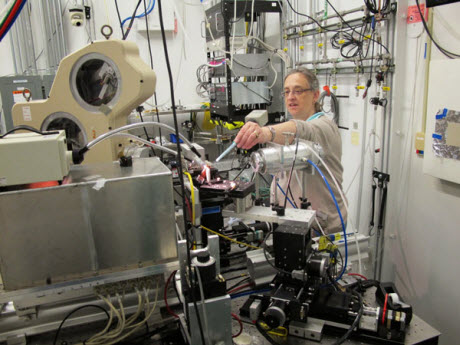 Photo courtesy of Benedictine UniversityTischler first began theorizing in 2012 whether egg specimens could be analyzed using X-rays. She had access to thousands of egg specimens the late Benedictine professors Frs. Hilary and Edmund Jurica, O.S.B., had amassed over a period of decades. Those specimens are now part of the University’s Jurica-Suchy Nature Museum, which boasts a collection of more than 50,000 plants and creatures ranging from butterflies, beetles and spiders to a whale skeleton.

“We have eggs dating back 150 years,” Tischler said. “Before binoculars were invented and made bird-watching popular, many people collected bird eggs. Then when migratory bird acts were instituted in the late 19th century and made the practice of collecting eggs unfashionable and illegal, many collections were donated to museums.

Tischler, who worked closely with Fr. Theodore Suchy, O.S.B, who served as the University’s museum curator for more than 40 years, was partly inspired by the monk’s dedication to preserving the collection for future generations.

“Fr. Ted’s contribution was to take that teaching collection and make it into a museum for the public and the university,” Tischler said.

Now she has taken the use of the collection a step further.

“The next step would be to take this incredible collection and see what we can use for research,” she added. “I felt that is where my contribution could lie. While a microbiologist by training, I have a strong background in environmental research and toxicology.”

She wrote a proposal asking Argonne if she could use its advanced X-ray equipment to detect metals and inorganic pollutants in bird eggs. Argonne approved her request and in 2013, Tischler and her research team began detecting some pollutants using the X-ray beam.

But why eggs? And what does finding pollutants in the eggs really mean?

“When birds lay eggs, they excrete contaminants into the egg, and the contaminants in the eggshell reflect blood concentrates of those contaminants,” Tischler said. “These specimens represent a window into the past. The problem is that up until this research, all the techniques used to identify the contaminant in an eggshell were destructive. You take the eggshell, crush it, dissolve it in acid and examine it. It would be unfathomable to destroy these rare eggs for research.”

Using the Advanced Photon Source, Tischler designed a method to examine changes in an ecosystem by looking at these rare egg collections without damaging them. She tested the methodology with chicken eggs first to make sure X-rays would not damage the eggs.

The machine uses an electron storage ring that produces hard X-rays. The X-rays cause the elements to fluoresce, and analyzing the fluorescence allows the researchers to determine which elements are present. Researchers identified within the eggs naturally occurring elements such as calcium, iron and zinc, but also elements such as manganese, arsenic, bromine and lead, which can be considered contaminants.

Researchers examined the eggs of a variety of birds including eagles, ospreys, pied-billed grebes, common terns and peregrine falcons. Curiously, not all eggs (grebes, terns) taken from the same period and geographical location showed contaminants.

“With the eagle and osprey eggs, we could detect quite a bit of contaminants,” Tischler said. “My conclusion is my technique does not work on specimens that are lower on the food chain. It’s based upon what they eat.”

To prove her hypothesis, Tischler submitted a second proposal approved by Argonne to test a new set of eggs in order to ascertain whether the presence or absence of contaminants is related to the type of bird or its environment.

In the examination of eagle and osprey eggs from approximately the same era (circa mid-1910s), researchers found levels of arsenic and lead in addition to iron and zinc.

“You see the same contaminants in both types of bird, so it’s the environment–not the bird,” Tischler said. “The same species at the same time from different watersheds were exposed to different contaminants and we can show this. It’s a new technique to gain a window into the past to compare watersheds and compare contaminants over time.”

Benedictine undergraduate and graduate students were engaged in the research process, which developed a following on Snapchat. Student researchers helped switch out samples, operated the equipment and recorded results. This type of hands-on research has become commonplace for Benedictine students pursuing careers in the sciences.

Tischler plans to submit a manuscript with full results for publication in a scientific journal in the near future.

The College of Science at Benedictine University provides unique opportunities for undergraduate students to participate in research projects on campus, and internships through its ties to the regional science community, which includes Argonne, Fermi National Accelerator Laboratory and the Field Museum of Natural History. This experience allows students to gain expertise in a laboratory setting, connecting their classroom work to real-world applications.

For nearly a century, the science faculty at Benedictine has prepared its students to lead lives of meaning, purpose and distinction. Empowered by a values-centered Benedictine science education that emphasizes hands-on scientific exploration and discovery, alumni have gone on to realize their professional potential, build stellar careers and bring their talents to bear on society’s most pressing needs.