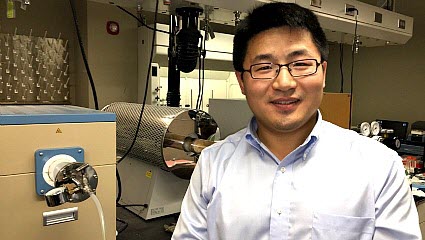 Since that fateful commute, Deng has published research detailing his research team’s work collecting algae directly from Lake Erie and baking it in a furnace with argon gas to turn it into a hard carbon, which can be used as an electrode to reversibly store sodium ions. Deng’s hope is that cheap sodium ion batteries will one day replace the lithium ion batteries that power our smartphones.

“Sodium has similar properties to lithium, but it is much more abundant,” said Deng. “We are working now to optimize the performance of algae-derived carbon in storing the sodium ions, and how many times it can be used and charged so that we can compete with existing lithium ion batteries.”

In addition to enhancing phones, harvesting algae blooms could help mitigate environmental problems and provide a source of biomass.

Deng said that while large-scale harvesting of harmful algae blooms from lakes is not an inexpensive or easy task, it may become more feasible if the algae are converted into high-value products, such as batteries for personal electronic devices or electric vehicles.