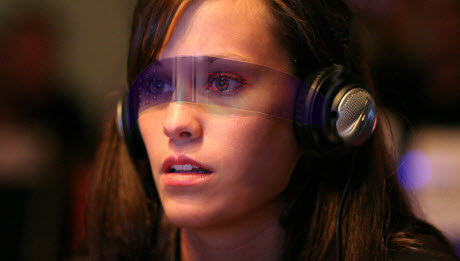 A mockup of an augmented reality mobile phone using a curved LED screen that renders data for the wearer/user gathered by cameras mounted on one or both sides.Photo credit: Leonard Low / Wikimedia commonsAugmented reality is the enhancement of human perception through overlaying technologies that can expand, annotate and even record the user’s moment-to-moment experience.

Those designing coming augmented reality systems should make them adaptable to change, resistant to hacking and responsive to the needs of diverse users, according to a white paper by an interdisciplinary group of researchers at the University of Washington’s Tech Policy Lab.

Though still in its relative infancy, augmented reality promises systems that can aid people with mobility or other limitations, providing real-time information about their immediate environment as well as hands-free obstacle avoidance, language translation, instruction and much more. From enhanced eyewear like Google Glass to Microsoft’s wearable HoloLens system, tech, gaming and advertisement industries are already investing in and deploying augmented reality devices and systems.

But augmented reality will also bring challenges for law, public policy and privacy, especially pertaining to how information is collected and displayed. Issues regarding surveillance and privacy, free speech, safety, intellectual property and distraction — as well as potential discrimination — are bound to follow.

The Tech Policy Lab brings together faculty and students from the School of Law, Information School and Computer Science & Engineering Department and other campus units to think through issues of technology policy. “Augmented Reality: A Technology and Policy Primer” is the lab’s first official white paper aimed at a policy audience. The paper is based in part on research presented at the 2015 International Joint Conference on Pervasive and Ubiquitous Computing, or UbiComp conference.

Ryan Calo, assistant professor of law and Tech Policy Lab co-director, is lead author together with Batya Friedman of the Information School and Tadayoshi Kohno and Franziska Roesner of computer science and engineering. Other co-authors are Emily McReynolds, UW Tech Policy Lab associate director; Tamara Denning, who graduated from the UW in computer science and engineering and is now an assistant professor at the University of Utah; Bryce Newell, who graduated from the UW Information School and is now a postdoctoral researcher the University of Tilburg; Information School doctoral student Lassana Magassa and School of Law alumnus Jesse Woo.

The researchers used a method of work designed by the Tech Policy Lab for evaluating new technologies, first conferring with those in the computer science field to define augmented reality as precisely as possible. Then they look to the humanities and social sciences — information science, in this case — to consider the impact of the technology in question on various end users. They called these “diversity panels.”

Magassa, who organized the diversity panels, said they help to ensure that underrepresented groups are highlighted in a way that makes sense to those that develop technology and its governing policies.

“They also are important in that they increase the likelihood that the people who develop such policies get to hear and consider alternate points of view, concerns and visions as they design and develop technology policies,” he said.

The group arrived at a set of recommendations for policymakers that “do not purport to advance any particular vision, but rather provide guidance that can be used to inform the policymaking process.”

Their recommendations, briefly put, were:

Build dynamic systems: Augmented reality systems should be flexible and capable of being updated to reflect changes both technological and cultural, to remain relevant.

Conduct “threat modeling”: Hackers beat systems by finding behaviors that designers didn’t anticipate. Systems should be reviewed with an eye toward who might wish to compromise the system and how. This is particularly important because breeches of augmented reality systems could lead to physical harm.

Coordinate with designers: No technology policy should be made in isolation. Designers may not fully appreciate the legal import of a project and policymakers need to understand the technology in order to make wise decisions.

Acknowledge trade-offs: Systems open to third-party analysis or additions might promote greater freedom and innovation, but at the cost of harm through malicious applications or coding. Long-term storage, cloud processing or other advanced data processes might give faster performance at the cost of privacy.

“We had to come up with a process to blend the technical, legal, design and other elements into a single policy document,” he said. “I hope the finished document proves useful to policymakers of all kinds.”