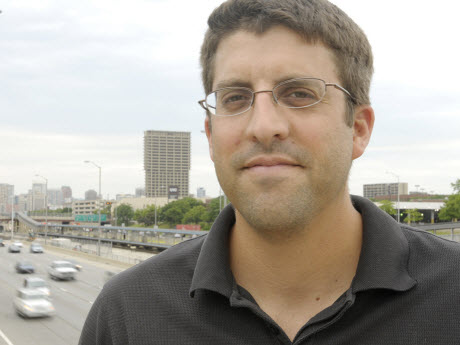 Lee Friedman, associate professor of environmental and occupational health sciences, UIC School of Public Health.Photo courtesy of the University of Illinois at ChicagoScientists looking for environmental and occupational health risks are less likely to find them if they have a financial tie to firms that make, use, or dispose of industrial and commercial products, a University of Illinois at Chicago researcher has found.

His results are published in the Journal of Occupational and Environmental Medicine.

“Studies funded by organizations that are involved in exposing the environment to pollutants or their workers to hazardous materials are substantially less likely to observe an association that these exposures have or increase the risk for negative health consequences,” said Friedman, associate professor of environmental and occupational health sciences in the UIC School of Public Health.

Friedman said the link between financial conflict of interest and negative findings for risk was strongest in studies in which the primary author is employed by the military.

Other studies have shown that funding from corporations tends to result in findings favorable to the firm when looking at food and drug safety and climate issues. But the new study is the first to look for a link between financial conflict and favorable findings in studies of risks from exposure to potential chemical and physical health hazards in the workplace or home.

“Financial implications of research findings in this field are as substantial, if not greater than, [in] other fields,” said Friedman, noting that environmental and occupational health studies can often lead to civil lawsuits, fines, and stricter government regulation for the production, use, or disposal of commercial products.

Friedman gathered 373 original, peer-reviewed studies published in 2012 that looked for associations between human exposure to consumer and agricultural products and adverse health effects. He examined the authors’ affiliation with government and corporate funding sources, and the general findings of each study with respect to health risks posed by environmental or occupational exposures.

On closer look, simply receiving money to conduct research from an organization was not very predictive of authors reporting negligible risks, Friedman said. But a regular paycheck was.

“Employment was a key factor,” he said.

While 28.3 percent of the studies published by authors with a financial conflict of interest reported no risk when none of the authors was actually employed by an organization involved in the processing, use, or disposal of the hazard in question, this proportion jumped to 59 percent of studies if any of the authors was so employed. If it was the primary author who was the employee, the proportion rose of studies finding no risk rose to 64 percent if the employer was a corporation—and 83 percent if the employer was military.

Friedman said that some critics have supposed that scientists would be more likely to find risk if their research was funded by regulatory agencies, such as the Environmental Protection Agency. However, he found that government-funded studies did not differ in their likelihood of finding risk from studies in which the authors had no apparent interest in the outcome.

“The assertion that government-funded studies would disproportionately report … findings [of risk] because of a systematic bias by the employees within these organizations is not supported by the findings in this analysis,” Friedman said.

Friedman says that part of the problem with transparency about conflicts of interest is that the responsibility to disclose them rests solely on the author.

“There are few repercussions for failing to disclose a conflict, and there are few protections for whistleblowers,” he said. “Whatever solutions are developed, they must be adopted broadly and internationally—so authors don’t publish through countries where getting around reporting conflict of interest is easier.”

When asked if he had any conflict of interest to report for this study, Friedman said, “I didn’t receive or solicit any funding to do this research.”