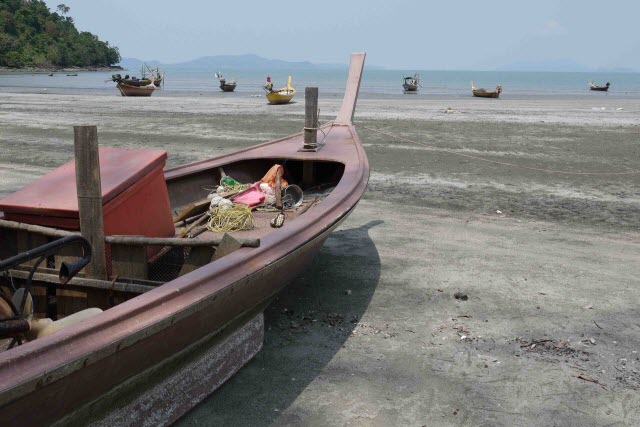 Fishing boats on the beach in front of a marine protected area in Thailand.Photo credit: Nathan Bennett

People must be part of the equation in conservation projects. This will increase local support and the effectiveness of conservation.

That’s the main conclusion of a study published online Nov. 29 in the journal Biological Conservation. In it, an international group of scientists recognizes the need to consider humans’ livelihoods, cultural traditions, and dependence on natural resources when planning and carrying out conservation projects around the world.

As the Earth continues to lose species and natural resources, the common approach to conservation has been to emphasize natural science to solve ecological problems, leaving people’s relationships to natural resources out of the discussion. Increasingly, natural scientists and social scientists are partnering to try to consider both the needs of nature and of stakeholders. But for lack of good precedent, funding and will, often conservation organizations and activities don’t fully consider the human dimensions of conservation, the authors found. 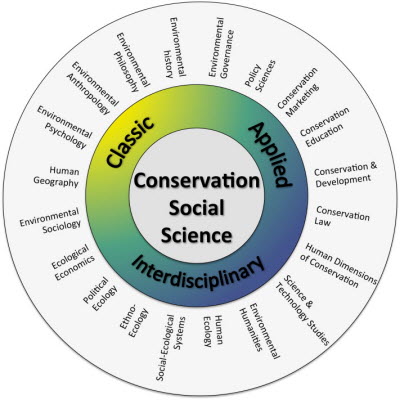 A list of the conservation social sciences. Image courtesy of the University of Washington“When people are ignored and conservation measures are put in, we see opposition, conflict and often failure,” Bennett said. “These problems require the best available evidence, and that includes having both natural and social scientists at the table.”

This paper follows dozens of studies that point out the need for humans to be considered in environmental management and conservation, but few have articulated the benefits of doing so and exactly how to do this, Bennett explained. This review paper is the first to bring together the entire storyline by listing the practical contributions the variety of social sciences can offer to improve conservation.

“This paper helps us to move beyond statements about the need for this toward actually setting the agenda,” Bennett said.

Two years ago, Bennett convened an international working group to find ways to practically involve more social scientists from fields such as geography, history, anthropology, and economics in conservation projects. This paper is one of several outcomes from that working group. Another paper published in July 2016 suggests that conservation organizations and funders should put more emphasis on social sciences and explains what an ideal “conservation team” could look like.

This new study calls for action to ensure that we have learned the lessons from past failures and successes of ignoring or considering human dimensions in conservation. 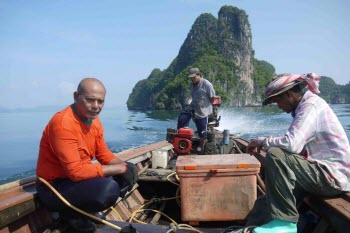 Some small-scale fishers on the Andaman coast of Thailand are resentful about marine protected areas, as they were not consulted and their needs were not considered.Photo credit: Nathan BennettIn Thailand, for example, officials set up a series of marine protected areas along the country’s coastline to try to conserve threatened habitats, including coral reefs, mangroves, and seagrass meadows. But they didn’t consider the thousands of fishermen and women who live near or inside the marine protected areas and rely on fishing and harvesting for livelihoods and feeding their families. Fishing bans and unfair treatment have led to resentment and opposition. In one case, fishermen burned a ranger station in protest.

To add to the divisiveness, big commercial boats still caught fish in these areas because the protection zones were not well enforced.

A recent successful example was the creation of California’s marine protected area network. Local fisheries and communities, along with scientists, fishery managers, government, and industry, were all brought to the table and the outcome ultimately was supported by most groups involved, Bennett explained. 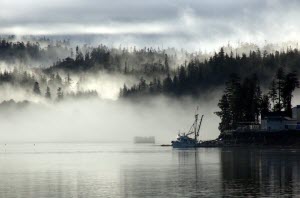 A fishing community in Port Hardy on the Pacific Coast of Canada.Photo credit: Sarah KlainSimilarly, right now in British Columbia planning for marine protected areas is underway, and First Nations leaders are working alongside local and federal governments.

Successful conservation projects happen when both natural and social scientists are working with government, nonprofits, resource managers, and local communities to come up with solutions that benefit everyone. This can take more time and resources at the outset, but Bennett and his collaborators argue that social scientists are often in a position to help make this a more efficient process.

“Ignoring the people who live in an area can be a costly mistake for conservation. This is one of those cases where an ounce of prevention can be worth more than a pound of cure,” he said. “Specialists in the social sciences can develop more creative, robust, and effective solutions to environmental problems that people are going to get behind.”

This study and co-authors were funded by the Canadian Wildlife Federation, the Social Science and Humanities Research Council, the Liber Ero Foundation, Fulbright Canada, the Smith Fellowship Program, the National Science Foundation, and a number of other organizations. See the paper for a complete list.