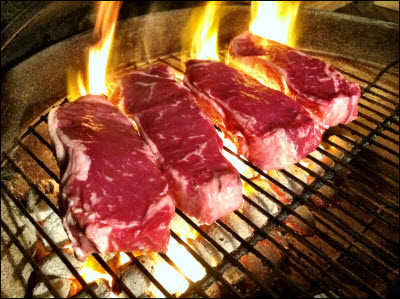 Across the board, meatless alternatives are associated with substantially lower emissions than actual meat, according to an analysis of the environmental impacts of 39 meat substitutes.Photo credit: _BuBBy_, Wikimedia CommonsNewswise — San Diego (April 4, 2016) — Trying to reduce your carbon footprint? You may want to take a closer look at the protein you put on your plate.

While the pollution generated to produce a typical 8-ounce steak is equivalent to driving a small car for about 29 miles, replacing that steak with the same weight of a vegetarian meat substitute is like driving the same car just three miles. Across the board, meatless alternatives are associated with substantially lower emissions than actual meat, according to an analysis of the environmental impacts of 39 meat substitutes presented at the American Society for Nutrition Annual Meeting during Experimental Biology 2016.

“As the world population grows, there’s an urgent need to produce protein-rich foods that are friendlier for the environment and healthy for people,” said Alfredo Mejia, Dr.PH., an associate professor of nutrition at Andrews University and the study’s lead author. “Our research shows that consumers can continue to enjoy meat-like tastes and textures while also significantly reducing their carbon footprint.”

While many studies have drawn attention to the environmental impacts of producing beef, pork, and chicken, less has been known about the impacts of “imitation meats” such as veggie burgers, meatless bacon, and imitation chicken nuggets, the production of which typically involves heavy processing.

While some protein-rich meat substitutes like tofu have been produced for centuries, the variety and popularity of meat substitutes has exploded in recent years. Most such products today are derived from either soy or wheat, though ingredients such as quinoa and pea are becoming more common.

“People increasingly want foods that are healthy for them but also are sustainable for the environment,” said Mejia. “This is the rationale that is driving an emerging market for meat substitutes. We have the power to use our fork to take care of our health and our planet.”

The research team analyzed emissions generated to produce 39 common meat substitutes from the field to the grocery-ready factory output. They began with established data on the environmental impacts of farming wheat and soy, which includes inputs such as fertilizer, pesticides, and water, as well as energy used for cultivation, harvesting, and transportation. They then visited factories and worked with meat substitute producers to track emissions associated with each step of the food production process, including the amount and origin of ingredients and packaging materials, transport of raw materials, water, energy, and other inputs required to operate the factory and pack the products.

Crunching thousands of data points using a specialized software called SimaPro, the team calculated total greenhouse gas emissions in terms of carbon dioxide equivalents, a standard measure for emissions that accounts for carbon dioxide as well as other heat-trapping gases, such as methane and nitrous oxide.

Worldwide, agriculture accounts for at least a fifth of total manmade greenhouse gas emissions. Mounting pressure to stem emissions has led to increasing calls to consider environmental impact, in addition to health, when making food choices.