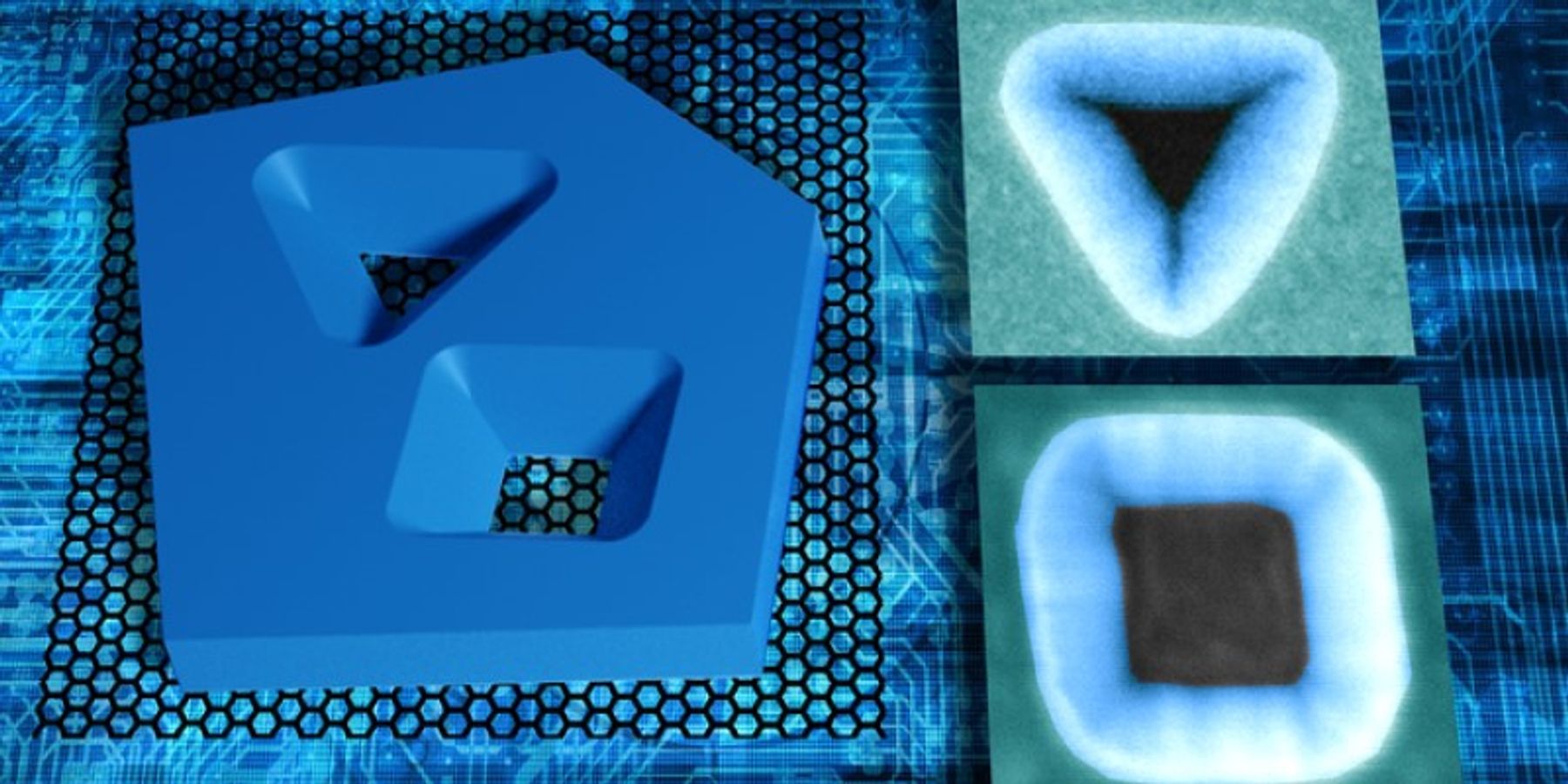 Crystals of the material hexagonal boron nitride can be etched so that the pattern you draw at the top transforms into a smaller and razor-sharp version at the bottom. These perforations can be used as a shadow mask to draw components and circuits in graphene. This process enables a precision that is impossible with even the best lithographic techniques today. To the right are images of triangular and square holes taken with an electron microscope.
Peter Bøggild, Lene Gammelgaard og Dorte Danielsen.

Technical University of Denmark (DTU) and Graphene Flagship researchers have taken the art of patterning nanomaterials to the next level. Precise patterning of 2D materials is a route to computation and storage using 2D materials, which can deliver better performance and much lower power consumption than today's technology.

One of the most significant recent discoveries within physics and material technology is two-dimensional materials such as graphene. Graphene is stronger, smoother, lighter, and better at conducting heat and electricity than any other known material.

Their most unique feature is perhaps their programmability. By creating delicate patterns in these materials, we can change their properties dramatically and possibly make precisely what we need.

At DTU, scientists have worked for more than a decade on improving state of the art patterning 2D materials, using sophisticated lithography machines in the 1500 m2 clean room facility. Their work is based in DTU's Center for Nanostructured Graphene, supported by the Danish National Research Foundation and a part of The Graphene Flagship.

The electron beam lithography system in DTU Nanolab can write details down to 10 nanometers. Computer calculations can predict the exact shape and size of patterns in the graphene to create new types of electronics. They can exploit the charge of electrons and quantum properties such as spin or valley degrees of freedom, leading to high-speed calculations with far less power consumption. These calculations, however, ask for atomic resolution, a higher resolution than even the best lithography systems can deliver.

"If we really want to unlock the treasure chest for future quantum electronics, we need to go below 10 nanometers and approach the atomic scale," says professor and group leader at DTU Physics, Peter Bøggild.

And that is exactly what the researchers have succeeded in doing.

"We showed in 2019 that circular holes placed with just 12-nanometer spacing turn the semimetallic graphene into a semiconductor. Now we know how to create circular holes and other shapes such as triangles, with nanometer sharp corners. Such patterns can sort electrons based on their spin and create essential components for spintronics or valleytronics. The technique also works on other 2D materials. With these super small structures, we may create very compact and electrically tunable meta-lenses to be used in high-speed communication and biotechnology," explains Bøggild.

The research was led by postdoc Lene Gammelgaard, an engineering graduate of DTU in 2013 who has since played a vital role in the experimental exploration of 2D materials at DTU:

"The trick is to place the nanomaterial hexagonal boron-nitride on top of the material you want to pattern. Then you drill holes with a particular etching recipe," says Gammelgaard.

"The etching process we developed over the past years down-size patterns below our electron beam lithography systems' otherwise unbreakable limit of approximately 10 nanometers. Suppose we make a circular hole with a diameter of 20 nanometers; the hole in the graphene can then be downsized to 10 nanometers. While if we make a triangular hole, with the round holes coming from the lithography system, the downsizing will make a smaller triangle with self-sharpened corners. Usually, patterns get more imperfect when you make them smaller. This is the opposite, and this allows us to recreate the structures the theoretical predictions tell us are optimal," Gammelgaard continued.

One can produce flat electronic meta-lenses—a kind of super-compact optical lens that can be controlled electrically at very high frequencies, and that, according to Gammelgaard, could become an essential component for the communication technology and biotechnology of the future.

The other key researcher is a young student named Dorte Danielsen. She became interested in nanophysics after a 9th-grade internship in 2012, won a spot in the final of a national science competition for high school students in 2014, and pursued studies in physics and nanotechnology under DTU's honors program for elite students.

She explains that the mechanism behind the "super-resolution" structures is still not well understood:

"We have several possible explanations for this unexpected etching behavior, but there is still much we don't understand. Still, it is an exciting and highly useful technique for us. At the same time, it is good news for the thousands of researchers around the world pushing the limits for 2D nanoelectronics and nanophotonics."

Supported by the Independent Research Fund Denmark, within the METATUNE project, Danielsen will continue her work on extremely sharp nanostructures. Here, the technology she helped develop, will be used to create and explore optical meta-lenses that can be tuned electrically.