A team of archaeologists, led by Cat Jarman from the University of Bristol's Department of Anthropology and Archaeology, has discovered that a mass grave uncovered in the 1980s dates to the Viking Age and may have been a burial site of the Viking Great Army war dead. 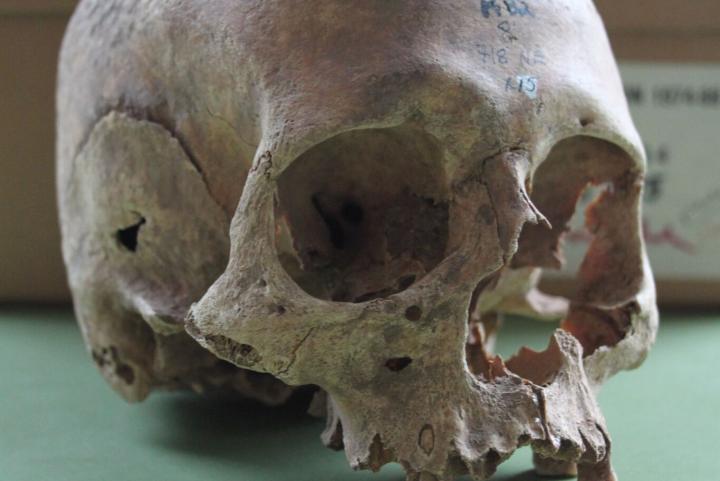 This is one of the female skulls from the Repton charnel.Photo Source: Cat Jarman

Although the remains were initially thought to be associated with the Vikings, radiocarbon dates seemed to suggest the grave consisted of bones collected over several centuries. New scientific research now shows that this was not the case and that the bones are all consistent with a date in the late 9th century. Historical records state that the Viking Great Army wintered in Repton, Derbyshire, in 873 A.D. and drove the Mercian king into exile.

Excavations led by archaeologists Martin Biddle and Birthe Kjølbye-Biddle at St Wystan's Church in Repton in the 1970s and 1980s discovered several Viking graves and a charnel deposit of nearly 300 people underneath a shallow mound in the vicarage garden.

The mound appears to have been a burial monument linked to the Great Army.

An Anglo-Saxon building, possibly a royal mausoleum, was cut down and partially ruined, before being turned into a burial chamber. 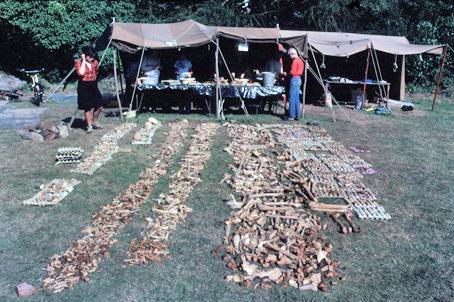 These are bones from the Repton charnel during excavations.Photo Source: Mark Horton

One room was packed with the commingled remains of at least 264 people, around 20 percent of whom were women. Among the bones were Viking weapons and artefacts, including an axe, several knives, and five silver pennies dating to the period 872-875 A.D. 80 percent of the remains were men, mostly aged 18 to 45, with several showing signs of violent injury.

During the excavations, everything pointed to the burial's association with the Viking Great Army, but confusingly, initial radiocarbon dates suggested otherwise. It seemed to contain a mix of bones of different ages, meaning that they could not all have been from the Viking Age.

Now, new dating proves that they are all consistent with a single date in the 9th century and therefore with the Viking Great Army.

Cat Jarman said: "The previous radiocarbon dates from this site were all affected by something called marine reservoir effects, which is what made them seem too old.

"When we eat fish or other marine foods, we incorporate carbon into our bones that is much older than in terrestrial foods. This confuses radiocarbon dates from archaeological bone material and we need to correct for it by estimating how much seafood each individual ate." 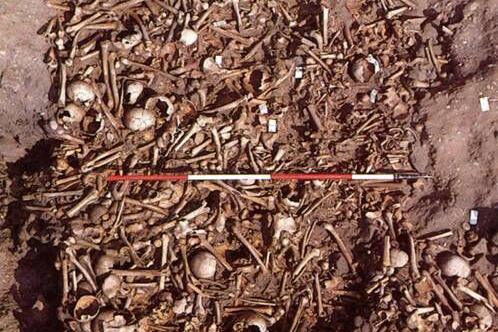 This is an overview of the charnel burial from the original excavations.Photo Source: Martin Biddle

A double grave from the site—one of the only Viking weapon graves found in the country—was also dated, yielding a date range of 873-886 A.D.

The grave contained two men, the older of whom was buried with a Thor's hammer pendant, a Viking sword, and several other artefacts.

He had received numerous fatal injuries around the time of death, including a large cut to his left femur. Intriguingly, a boar's tusk had been placed between his legs, and it has been suggested that the injury may have severed his penis or testicles, and that the tusk was there to replace what he had lost in preparation for the after-world.

The new dates now show that these burials could be consistent with members of the Viking Great Army.

Outside the charnel mound another extraordinary grave can now be shown to be likely to relate to the Vikings in Repton as well.

Four juveniles, aged between eight and 18, were buried together in a single grave with a sheep jaw at their feet.

Next to them large stones may have held a marker, and the grave was placed near the entrance to the mass grave. At least two of the juveniles have signs of traumatic injury. The excavators suggested this may have been a ritual grave, paralleling accounts of sacrificial killings to accompany Viking dead from historical accounts elsewhere in the Viking world. The new radiocarbon dates can now place this burial into the time period of 872-885 A.D.

Cat Jarman added: "The date of the Repton charnel bones is important because we know very little about the first Viking raiders that went on to become part of considerable Scandinavian settlement of England.

"Although these new radiocarbon dates don't prove that these were Viking army members it now seems very likely. It also shows how new techniques can be used to reassess and finally solve centuries old mysteries."