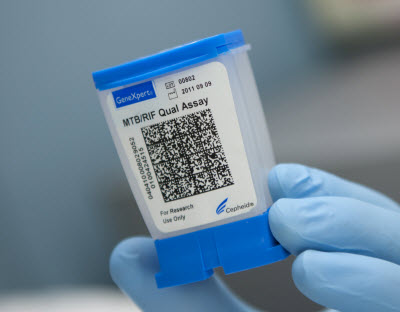 Researchers will adapt this cartridge, now used worldwide for tuberculosis screenings, to collect and test samples from potential Ebola patients.John EmersonA Rutgers researcher has received a grant of nearly $640,000 from the National Institutes of Health to develop a rapid test to diagnose Ebola as well as other viruses that can cause symptoms similar to Ebola.

David Alland, a professor of medicine and associate dean for clinical research at Rutgers New Jersey Medical School – and the principal investigator for the project – says health workers would be able to take the test to small villages and other remote locations where the spread of Ebola has been especially rampant and diagnose patients where they live.

The test could be used wherever electricity is available, including power from car batteries, according to Alland. “That means diagnosis would take significantly shorter than the time it takes to get a test result now from a medical lab,” he says.

Alland, working with the California biotechnology company Cepheid, hopes to develop the test within the next 15 months – using genetic material from Ebola and other viruses that cannot cause or spread disease. Work in Alland's laboratory will not involve the use of live virus.

Alland and Cepheid previously used technology similar to the planned Ebola test to develop a rapid test for tuberculosis (TB) that is now widely used in impoverished areas of the world.

The TB test on which the new diagnostic will be modeled was endorsed by the World Health Organization for worldwide use in 2010 and approved by the Food and Drug Administration last year for use in the United States. That test employs a small cartridge where a sample of a patient’s sputum is placed, which is then loaded into a machine for analysis. The result is available within two hours. 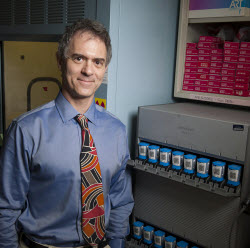 David Alland stands next to a portable diagnostic machine that can rapidly screen for disease wherever electricity is available.John EmersonAlland says the Ebola test would employ a modified form of the TB cartridge while using the same machine to analyze small amounts of patients’ blood or samples taken from cheek swabs.

“The beauty of this approach is that there’s already a substantial supply of these instruments in developing countries because of the tuberculosis tests, so we can piggyback,” Alland points out. Cepheid, which markets the TB test, says more than 3,500 of the systems are now in use in the developing world.

As they produce their test for the Ebola virus, Alland and Cepheid also plan to create rapid diagnostic tests for other viral illnesses including chikungunya – a painful mosquito-borne disease that, according to the CDC, sickened more than 140 people in New Jersey this year after those people had visited tropical regions in the Caribbean and Asia and islands in the Pacific.

Along with their importance in the developing world, tests that can rapidly and accurately diagnose Ebola and other illnesses may have great value for modern hospitals in the West.

“Hospitals lose both time and money because they often need to isolate patients who might have infectious diseases,” says Alland. “The sooner health professionals can be confident about patients’ disease status, the sooner those patients can receive necessary treatment if they are infected – or be released if they are not.”