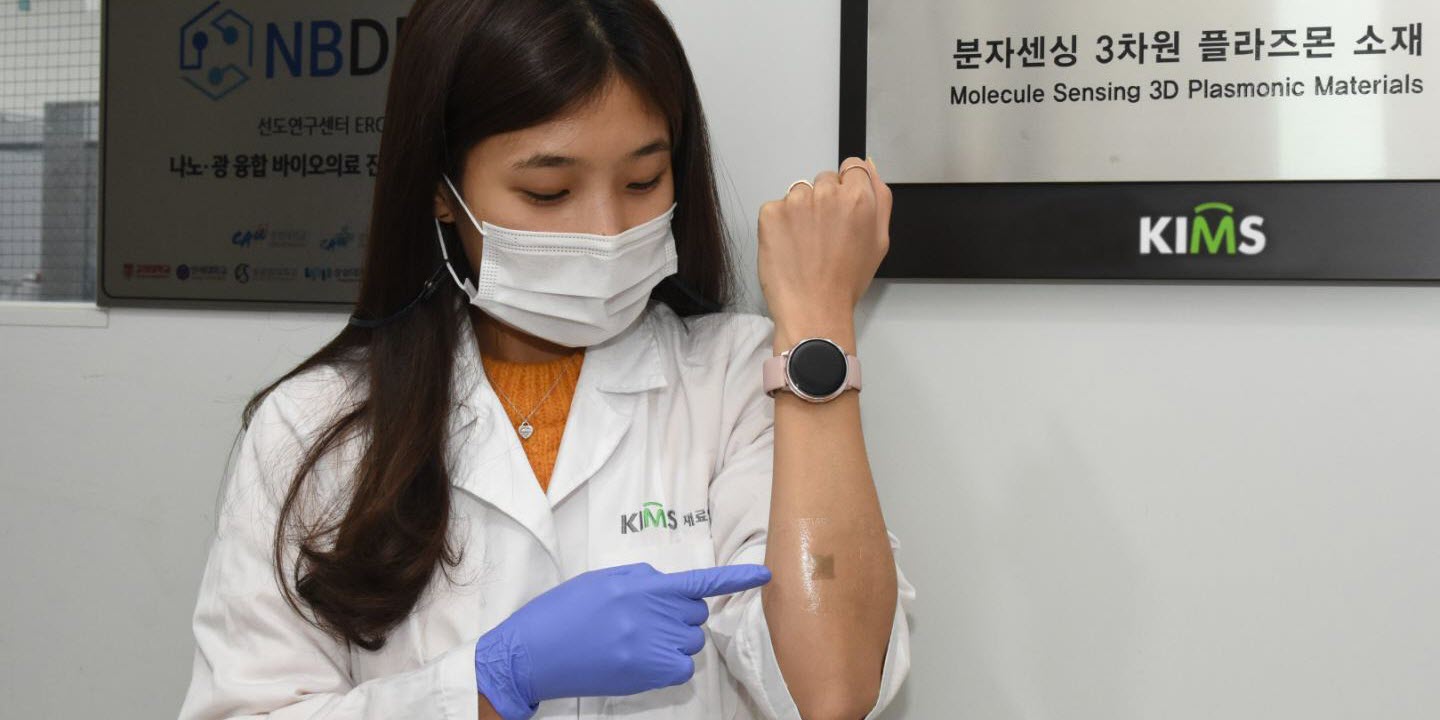 Researchers in South Korea have successfully developed a wearable sensor that can detect illegal drugs in sweat by using nanomaterials technology that amplify the optical signal of narcotics to a flexible, body-worn material. Led by Dr. Ho Sang Jung, the research unit is part of the Korea Institute of Materials Science (KIMS), a government-funded research institute under the Ministry of Science and ICT.

The technology enables fast and highly sensitive drug detection: the sweat patch is attached to the skin for a certain period of time and then irradiated with light for testing. It only takes one minute without requiring additional process.

Traditional drug detection process requires a complex method of extracting suspected drug components from biologic specimens including hair, blood, and urine, and then analyzing drugs through gas or liquid chromatography-mass spectrometry (GC/MS or LC/MS). It takes longer testing time and requires a large room for the instrument and skilled technicians. Although rapid kits can detect drugs in urine, they only detect a single component in a single test and have low sensitivity.

In the case of athletes, anti-doping drug testing is conducted to detect prohibited substances in blood and urine. Blood testing is often avoided due to concerns about decline in athletic performance, and urine testing may violate human rights as the tester must observe the athlete's urination. For the large sports events such as the Olympics, it is difficult to test all of the participants.

The researchers focused on sweat which is not invasive and relatively free from human rights issues. However, only small amount of substances is discharged in sweat, even though sweat contains various drugs taken so a highly sensitive sensor technology had to be developed for better detection.

The team's highly sensitive sensing utilized the surface-enhanced Raman scattering technology capable of enhancing the Raman signal of chemical substances by 1010 times and more. As the Raman scattering signal includes the specific signal of molecules, intuitive substance identification is possible no matter what drug is discharged.

The researchers paid attention to the cocoon protein, a flexible and wearable material to develop a wearable optical sensor. A silk fibroin solution, a natural protein, was extracted from silkworm cocoon to make a 160 nanometer (nm) thick film. The film was coated with 250 nanometers (nm) thick silver nanowire and transferred to the medical patch that can be attached to the skin.

Once the patch absorbs the sweat, the drug substance in the sweat penetrates the wearable sensor and reaches the silver nanowire. By irradiating the Raman laser on the patch, the drug can be detected in real time without removing the sensor.

This technology can help address social problems such as drug distribution and abuse related to celebrities, drug transactions in clubs, and prohibited substances taken by athletes. Since the production cost is less than 50 cents per piece, it can be used for an anti-doping program as a complete enumeration survey during large sports events such as the Olympics.

Sang Jung, the leader of research unit, said, "As seen in recent drug-related crimes, Korea is no longer a drug-free country. The developed technology would overcome the technological limitations on identifying drug and prohibited substance use and enable drug detection without invasive and ethical problems."

- This press release was supplied by Korea's National Research Council of Science & Technology. It has been edited for style