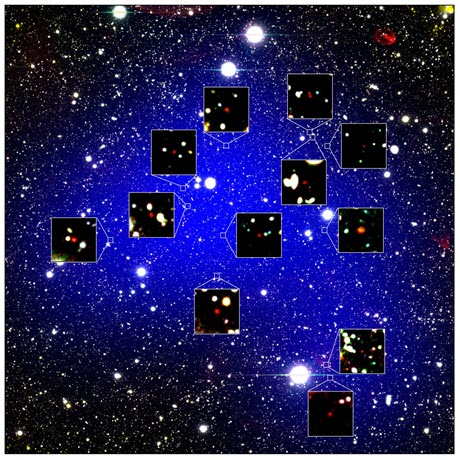 The blue shading shows the calculated extent of the protocluster, and the bluer color indicates higher density of galaxies in the protocluster. The red objects in zoom-in figures are the 12 galaxies found in it. This figure shows a square field-of-view 24 arcminutes along each side (corresponding to 198 million light-years along each side at a distance of 13.0 billion light-years). Each zoom-in figure is 16 arcseconds along each side (corresponding to 2.2 million light-years)Credit: NAOJ/Harikane et al.An international team of astronomers with participation by researchers from DAWN, Niels Bohr Institute, University of Copenhagen has discovered a protocluster of galaxies 13.0 billion light years away using the Subaru, Keck, and Gemini Telescopes in Hawaii. A protocluster is a structure of galaxies still in the process of forming a cluster. This protocluster is the most distant protocluster ever found. The discovery suggests that a large structure such as a protocluster already existed at a time when the universe was only about 800 million years old—six percent of its present age. Finding a protocluster this far away makes finding the needle in the haystack seem an easy task, but more importantly, it holds important information on the history of the universe. The result is now published in Astrophysical Journal.

Far away is also far back in time in astronomy

To understand the formation of clusters of galaxies, astronomers have searched for protoclusters of galaxies that are thought to be ancestors to todays cluster of galaxies. A protocluster is a dense system of tens of galaxies in the early universe, which is in the process of growing to a cluster. Finding and analyzing protoclusters in the early universe is a crucial step to understanding formation and growth of galaxies in overdense regions. This is one of the outstanding problems in galaxy evolution. Professor Sune Toft from DAWN explains: "Searching the sky for structures like this protocluster is not actually about the record, even though it is rather impressive even to be able to find it. That is an accomplishment in itself. But finding the most distant protocluster is all about moving the limits for what we are able to see—how far back in time are we able to establish a continuous baseline for our understanding of the development of the universe? When we look far away, we also look back in time. That's why the record is scientifically significant."

In this particular period in the history of the universe, the cosmic dawn, a period of only half a billion years after the big bang, an enormous amount of activity is going on in the universe. Galaxy formation can be studied closely, as the limited time frame reduces the amount of events that could influence galaxy formation. In other words, the array of possibilities for events forming galaxies is less wide. "We can basically limit our focus to fewer elements of the underlying physics taking place," says Toft. "If I were a detective investigating a murder, I'd want to find the body as soon as possible after the crime has been committed, in order to have fresh clues and unspoiled evidence. That's more or less the same situation here. Enormous astrophysical activity distributed over a short period of time, gives us a whole lot of observational material to work with, and not as many ifs and buts, as when we look at galaxy formation over a longer period of time."

"Another very important aspect of the study, which to me is extremely fascinating, is that here, we can study the distribution of galaxies in the cosmic web, and relate what we see—the light from the stars—to the underlying distribution of dark matter. Dark matter really drives everything in the development of galaxies. We just can't see it. But if we become able to place the galaxies in the cosmic web and track the developments, then in turn we can see how dark matter impacts what we can see. That is really the big, unanswered question here. We actually don't know the precise relation between dark matter and matter that emits light at the moment. But studies like this provide us with tools to tackle this problem observationally," Toft explains. "Unveiling the dark skeleton of the universe is really the ultimate goal we have before us with this." 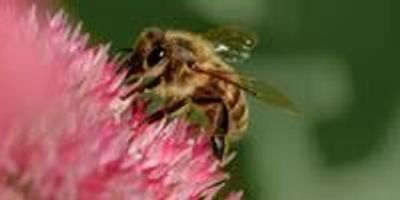 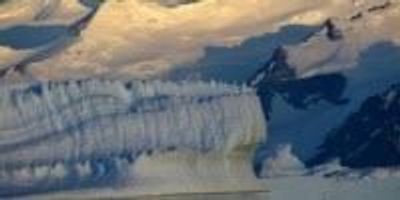