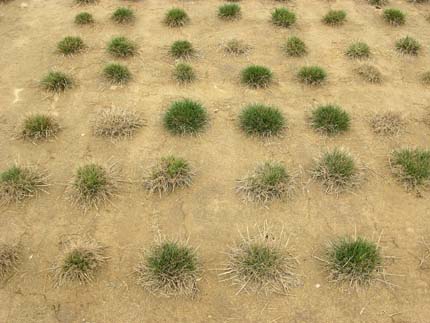 Differences in salinity tolerance among perennial ryegrass genotypes.Photo provided by Stacy BonosLuckily for people, some plants are able to make do without perfectly clean water, leaving more good water for drinking. One strategy is to use treated wastewater, containing salt leftover from the cleaning process, to water large areas of turf grass. These areas include athletic fields and golf courses. Golf courses alone use approximately 750 billion gallons of water annually in arid regions.

However, most plants cannot tolerate a lot of salt. As some areas of the United States run low on clean water, plant breeders are trying to breed plants that are more salt tolerant. This would conserve clean water while maintaining healthy turf.

Plant breeders can actually see the individual effect of what each parent plant passes on because the genes add intensity to the trait. These are additive effects. Breeders can more easily select for those features when they observe those differences.

“We found through a series of experiments that salt tolerance in perennial ryegrass is highly controlled by additive genetic effects rather than environmental effects,” said Stacy Bonos from Rutgers University. “This is great news for breeders because we now know salt tolerance can be more easily bred for.”

Bonos and her team  measured salt tolerance using visual percent green color. This is the percentage of the plant that is green and actively growing as compared to brown, which would indicate that it is dead or dying.

“As a plant is affected by salinity it will start to turn brown,” explained Bonos. “It is an indication of their salt tolerance if they can continue to grow and have green tissue while the others turn straw colored and brown and start to die.” 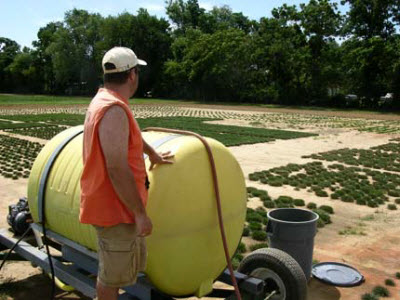 Matthew Koch, a graduate student, mixing up salt solution to apply to the perennial ryegrass plants in the background.Photo provided by Stacy BonoBonos and her team also conducted a series of experiments to confirm salt tolerance. One test looked at broad-sense heritability. This showed that the trait for salt tolerance has more genetic components than environmental ones.

“But there are a lot of things that make up the genetic components so we (also) use narrow-sense heritability to focus in on those components and see if they are mostly additive,” Bonos explained. “In this case they were and that’s important because as a breeder it means you can select for them.”

Two further experiments determined how successfully genetic factors pass to the plant’s offspring. For example, two plants may combine to pass on tolerance, but one of those parents may not pass on that same strong influence in a different cross. This gives breeders an estimate of which parents are better to use in crosses and confirms what type of gene effects are influencing salinity tolerance.

Bonos said the results show that when it comes to salt tolerance, additive gene effects are more important.

“All three of these experiments were really just different ways of getting to the same place and they all confirmed each other,” she said.

Bonos and her team are working to concentrate these genes for salt tolerance so turf grass can use more wastewater and less fresh water. They hope to eventually breed a marketable grass with high tolerance.

“It has the biggest implication for golf courses because there are some courses now that are required to water their grasses with wastewater instead of drinkable water,” she said. “That's where it most makes sense, especially in areas like Las Vegas where there may not be much drinkable water available to water your lawn. That's a prime example.”