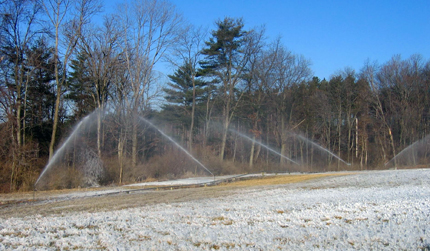 Spray irrigation at the Living Filter site of Penn State University continues year-round even during the freezing conditions of winter.Photo credit: Zachary LarsonFarmers in drought areas are especially concerned by this question. As fresh water resources become scarce, one option for water-conscious farmers is to water crops with treated wastewater. This effluent is becoming a more popular option for applications that don’t require drinking-quality water. However, there are still questions about how the effluent interacts with and affects the rest of the ecosystem.

This is where Alison Franklin and her team at Pennsylvania State University come in. Franklin is investigating what happens to certain compounds that remain in the effluent after treatment. She wants to know, “Where do these compounds go?”

The chemicals that Franklin studies are pharmaceutical and personal care products, including antibiotics. Currently, wastewater treatment facilities are not able to completely remove these compounds. They frequently remain in the effluent in an active form.

Franklin explains, “As I learned about pharmaceutical and personal care products in the environment, I became very interested in where these compounds were ending up. What were the possible implications of these low level compounds in the environment on human, animal, and ecological health?”

Franklin and her team set out to follow the environmental paths of four different compounds found in effluent when it is used to spray irrigate wheat crops.

First, Franklin measured the amounts of three types of antibiotics and one anti-seizure medicine in the effluent from the University Park wastewater treatment plant. The water from this treatment plant was then used to irrigate wheat crops at Penn State’s Living Filter site. This site is a special area used to test the reuse of effluent. Samples of the wheat straw and grain were collected before and at harvest time, and the samples were analyzed for the four different compounds. 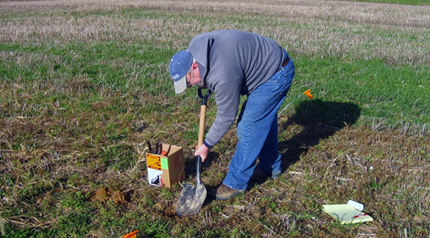 John (Jack) Watson, professor of Soil Physics & Biogeochemistry, collecting soil samples at Penn State's Living Filter site.Photo credit: Zachary LarsonMany factors affect the path of a compound into and within the plant, such as the pH level of the soil and the plant, the plant species, and even the specific plant part. By analyzing both the straw and the grain, Franklin was able to have a better idea of how the wheat plants take up the compounds.

“It is preferable for the compounds to be taken up into the non-edible portion, like straw, because it minimizes risk,” she explains. “By looking at both plant parts the study provided more comprehensive information about the fate of these compounds.”

The compounds’ trails have been tracked from the effluent to the wheat plants. So Franklin’s next investigation will be whether the small amounts of compounds in the wheat plants pose potential health risks for humans and animals. Franklin admits, “It’s a fine balance of protecting the health of the environment and organisms, yet managing water resources that are diminishing.”

Franklin is working to understand that balance and determine best options for smart water use. Read more about Franklin’s work in Journal of Environmental Quality. Penn State’s Office of Physical Plant and the USDA Regional Research Projects W-3170 and W-2082 funded this project.