ALBUQUERQUE, N.M. — Power plants draw more freshwater than any other consumer in the United States, accounting for more than 50 percent of the nation’s freshwater use at about 500 billion gallons daily.

To help save this water, researchers at Sandia National Laboratories have developed a new silica filter for power plant cooling waters that decreases the amount of freshwater power plants consume by increasing the number of times cooling tower water can be reused and recycled.

“We have a limited amount of water in this country to use for everything from drinking water to raising livestock, and global population and demand is growing,” said Sandia geochemist Pat Brady. “If you can recycle the water being used at power plants, it frees up a lot more water for domestic and personal use.” 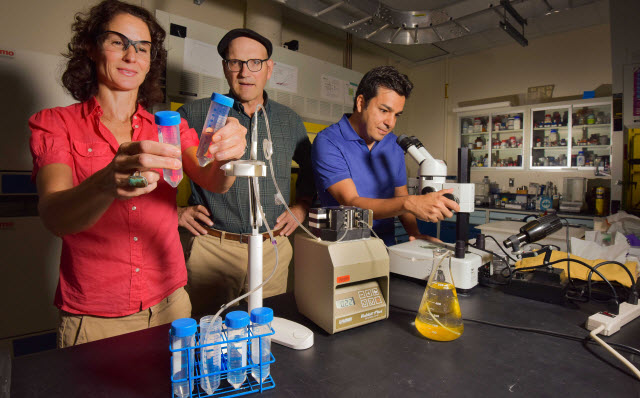 While power plants already recycle freshwater, the number of times a batch of water can be reused is limited by the amount of silica that builds up with each cycle. Silica is a common, naturally occurring substance in freshwater with limited solubility, and is prone to forming scales on turbines, boilers, heat exchangers, transfer pipes, and other equipment. This buildup is problematic because it can disrupt equipment function and is costly to prevent. The cost to treat and recycle water used at power plants is estimated to be 1.5 to 2 times the cost of freshwater, often because of the high price of current silica removal methods.

“When you have silica buildup, heat transfer is a problem, clogging is a problem, and corrosion is a problem,” said Sandia chemist Tina Nenoff. “So, our project focused on finding an energy- and cost-efficient material and process to remove silica from industrial water.”

Removing silica with a special filter

Nenoff had worked with hydrotalcite, a layered material made of aluminum hydroxide, since the early 2000s when she was studying methods for low cost desalination, and thought the material could be an effective filter for silica.

In a two-year Laboratory Directed Research and Development project, Nenoff, Brady, and their research team created special filters, pellets, and powders made of hydrotalcite to study the material’s ability to filter for silica. As documented in a recent article in the Journal of Waste Process Engineering, they found hydrotalcite could remove about 90 percent of accumulated silica in recycled water and be reused for five or more cycles. This ability to reuse the filter and recycle the cooling tower water could save both money and natural resources.

“Envision pellets of hydrotalcite or a powder like the kind found in a drinking water filter,” Nenoff said. “The water flows through or over the material during the filtration process, and the silica from the water crystalizes and remains in the filter while cleaner water flows out.”

The research team designed the hydrotalcite material to be used to filter cooling tower water at power plants. During the cooling process, some of the water evaporates and the minerals in the water, including silica, build up with each cycle.

“When you heat the water up and some of it evaporates, the silica and other materials in the water become more concentrated,” Brady said. “Right now, you may be able to use the water for a few cycles before it becomes too concentrated, but we are aiming for 10 or more cycles so that power plants can cut down on water use.”

From the lab to real world application

In addition to studying the material and its effectiveness, the team wanted to determine how to best scale up the new filtration material so it would be viable for large-scale operations at power plants. Students in the University of New Mexico’s civil engineering department, working under the direction of professor Kerry Howe, performed a scale-up analysis on the material, and researchers at Sandia’s Livermore, California, site performed a techno-economic analysis to estimate cost and energy savings for real world applications.

“The measurements we do here are in beakers the size of a coffee cup, but when you’re at a facility like a power plant that uses a million gallons a day, you want to know if hydrotalcite will be effective at that level,” Brady said.

The research team used the multidisciplinary approach and analyses to guide their experiments to find the best treatment of hydrotalcite for cost and energy efficient industrial use.

“A lot of the industry will already have a silica removal process that works, but it may not work well,” Nenoff said. “As a result of this project, we’ll be able to give them an estimated cost and energy savings, and even a projected lifetime savings that hydrotalcite could provide over their current method. That sort of modeling and analysis provides more incentive to take the risk of implementing a new method.”

The team has published three journal articles and received a provisional patent for the filter.