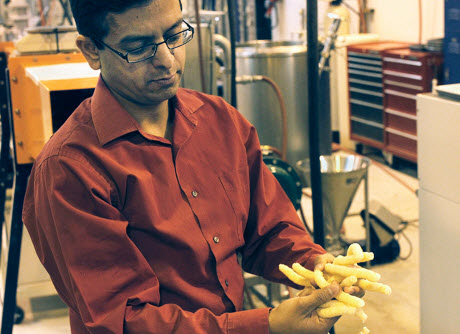 Girish Ganjyal and some of his graduate students have discovered how to add carrot pomace–the pulpy leftover from juicing the veggies–to cornstarch, increasing the “puffiness” of snack foods.

“That’s great–we didn’t know what we would find,” said Ganjyal, a WSU/University of Idaho School of Food Science assistant professor and WSU Extension food processing specialist. “We hope to continue researching and see just how the starch and fiber are interacting at the molecular level. Hopefully, we can include even more pomace in the recipe.”

The results are published as “Carrot pomace enhances the expansion and nutritional quality of corn starch extrudates,” in the May edition of the journal LWT-Food Science and Technology.

The research team experimented with concentrations of 5, 10 and 15 percent carrot pomace.

“At five percent, it was great,” Ganjyal said. “But at the higher concentrations, the end product got more dense and didn’t puff nearly as much.” 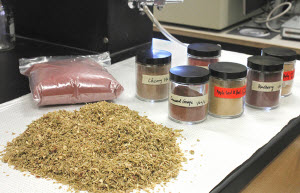 Pomace comes from a variety of fruits and vegetables used in making juices. The pomace is first dried, shown piled at left. Then the researchers grind it into fine powder, in the jars, for their experiments.Photo courtesy of Washington State UniversityPomace doesn’t affect the taste of snack foods, he said. In addition to adding fiber and some important nutrients to foods, the research creates a use for a wasted byproduct. Pomace is a leftover after industrial juicing of fruits and vegetables including apples, cherries, blueberries, grapes, and carrots.

Ganjyal said he talked with juice industry professionals and farmers who want to do something with the residue. With juice production increasing, there is more pomace byproduct.

“If we can find a real use for this, and add something positive to snack foods without affecting the taste or texture, it’s a real win-win,” he said.