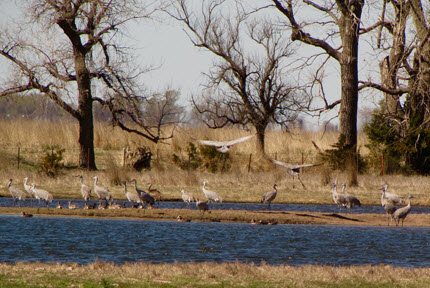 Cranes prefer open water to feed. Removing invasive reed canarygrass opens the waters for native plants and migratory birds like these in southern Nebraska.Photo credit SV FiskHow do you host tens of millions of migratory waterfowl every year? The Rainwater Basin of southeast Nebraska provides a vital resting stop and feeding station. There, the native wetland plants produce enough seed to replenish the birds—some of them threatened or endangered species—for their long journey.

But a non-native grass species has been wreaking havoc in wetlands all over the U.S. Reed canarygrass displaces native, high-seed producing species. The grass forms dense stands and clogs patches of open water in the wetland. It can survive through cold winters and tolerates both drought and moist conditions.

“It’s aggressive; nothing stops its growth,” said John Guretzky. Guretzky is a grassland systems ecologist at the University of Nebraska-Lincoln. He’s been studying an innovative way to contain the reed canarygrass’s destruction of seed-producing plants in wetlands.

But reed canarygrass isn’t the only threat to Nebraska wetlands. Most land surrounding the Rainwater Basin is farmed. Less than one percent of the original Rainwater Basin wetlands remain. Most wetlands in the area have been converted into cropland.

Guretzky is hoping to make the prospect of keeping wetlands more attractive. His experiment tests the usefulness of wetlands invaded by reed canarygrass as a feed source for cows. In theory, producers could rent out wetlands as grazing land to cattle farmers, or let their own cows graze it. Producers could also harvest the reed canarygrass.

By grazing or haying the wetlands, producers could access a free feed source for their cattle. The cattle would disturb the reed canarygrass enough to create open spaces for other vegetation. More open waters would be available for foraging water birds. Birds, cows, and producers would all benefit. 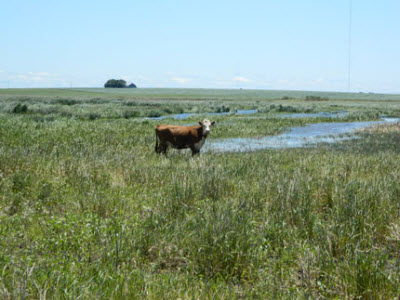 Cattle graze on reed canarygrass, an aggressive pest plant in Nebraska’s Rainwater Basin. Grazing could keep the invasive species in check and provide economic return to cattle farmers.Photo credit: John Guretzky“We’re trying to encourage producers to graze or harvest the wetlands,” he explained. “That way producers could still get value through the land.”

Guretzky wanted to know how repeated forage harvests would affect reed canarygrass. He also wanted to know how productive and nutritious the wetlands were with harvest.  “Cattle producers are concerned about their cattle health,” said Guretzky.

They also found that the more plots are grazed, the more likely other species besides reed canarygrass will have a chance.

“Removing all that top growth lets more light in on the soil,” he said. Reed canarygrass stems and leaves tend to smother annual plants and block the sunlight. By repeatedly mowing, the team gave other plants a chance.

But reed canarygrass proved more stubborn than Guretzky thought. Over the three-year experiment, they made a slight dent in the reed canarygrass’ hold in only one of the locations.

“If you don’t maintain that grazing pressure, you won’t see a strong decline in the reed canarygrass,” he said. “We didn’t have quite the impact we expected to.”

Guretzky said the next step would be to bring cows into the wetlands and let them graze repeatedly during the growing season. A longer experiment, with consistent grazing pressure, might loosen reed canarygrass’ stronghold enough to let other species in. But Guretzky said there’s probably no way to fully eradicate it without using herbicides and cutting the root structure with sharp disks.

Read more about this research in Agronomy Journal. Nebraska Game and Parks Commission and the Nebraska Environmental Trust funded the research.