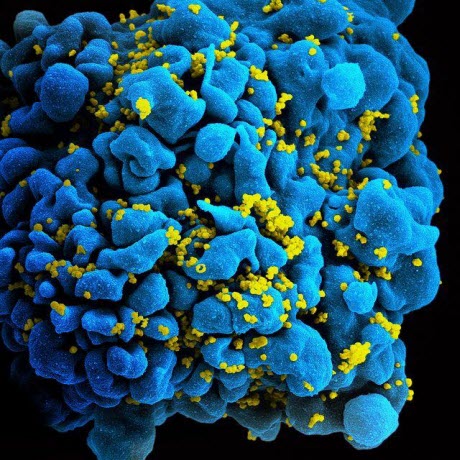 An HIV-infected T cell. Scanning electromicrograph of an HIV-infected T cell.Image credit: NIAIDImproving on a previous attempt, scientists have developed a new strategy that could potentially be used to reengineer a patient's own immune system cells to fight HIV. The approach, described in PLOS Pathogens, shows benefit in human cell cultures and in mice.

White blood cells known as T cells play an important role in the immune system's response to HIV infection, especially if a patient stops taking antiretroviral medications that normally keep the disease under control. However, HIV has several strategies it can use to evade T-cell attack. Therefore, some researchers have proposed reengineering a patient's own T cells to more effectively fight HIV.

Several attempts to reengineer T cells to fight HIV have been made in the past, including one approach that made it to clinical testing. However, none have yet been successful enough for widespread use. Now, a new attempt by Rachel Leibman, a PhD candidate in the Perelman School of Medicine at the University of Pennsylvania, and colleagues shows promise.

The new technique builds on the earlier approach that made it to clinical trials, which relied on a chimeric antigen receptor (CAR)—a synthetic protein that when added to T cells allows them to fight a specific foe more effectively. In treatment, T cells extracted from a patient's blood would be reengineered in the lab to express HIV-specific CARs, and then infused back into the patient to fight the virus. (Other CAR-based techniques successfully enhance T cell attack of some cancer cells.)

Using recent advances in CAR technology, Leibman and her colleagues enhanced the CAR protein that had previously made it to clinical testing. The protein consists of several different segments, which the scientists systematically tweaked one by one to optimize their performance. They found that T cells expressing the new CAR were over 50 times more effective than those with the original CAR in preventing viral spread between human cells in the lab.

The researchers also tested the new CAR in mice infected with HIV. They found that mouse T cells reengineered to express the new CAR could protect other T cells in the mice from being attacked and depleted by HIV. In mice that had been receiving antiretroviral treatment, the reengineered T cells delayed rebound of the virus after treatment was stopped.

These findings could pave the way to clinical testing of T-cell reengineering using the new, enhanced CAR. If successful, such an approach could potentially keep HIV under control in the absence of antiretroviral treatment.

"Our data shows for the first time that engineered T cells can significantly control viral rebound in the absence of ART in vivo," the authors explain. "Our next step is to take this concept forward into the clinic."