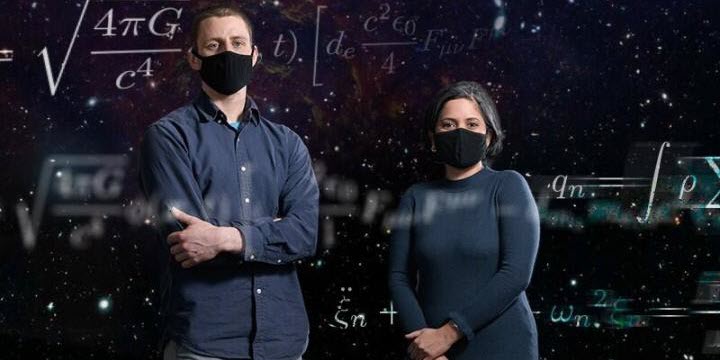 Jack Manley (left) is a UD doctoral student and Swati Singh is an assistant professor in the College of Engineering's Department of Electrical and Computer Engineering.
Photo by Evan Krape, photo composite by Jeffrey C. Chase

Scientists are certain that dark matter exists. Yet, after more than 50 years of searching, they still have no direct evidence for the mysterious substance.

University of Delaware's (UD's) Swati Singh is among a small group of researchers across the dark matter community that have begun to wonder if they are looking for the right type of dark matter.

"What if dark matter is much lighter than what traditional particle physics experiments are looking for?" said Singh, an assistant professor of electrical and computer engineering at UD.

Now, Singh, Jack Manley, a UD doctoral student, and collaborators at the University of Arizona and Haverford College, have proposed a new way to look for the particles that might make up dark matter by repurposing existing tabletop sensor technology. The team recently reported their approach in a paper published in Physical Review Letters.

Singh explained that if you add up all the things that emit light, such as stars, planets, and interstellar gas, it only accounts for about 15 percent of the matter in the universe. The other 85 percent is known as dark matter. It doesn't emit light, but researchers know it exists by its gravitational effects. They also know it isn't ordinary matter, such as gas, dust, stars, planets, and us.

One possibility is that dark matter is made up of dark photons, a type of dark matter that would exert a weak oscillating force on normal matter, causing a particle to move back and forth. However, since dark matter is everywhere, it exerts that force on everything, making it hard to measure this movement.

Singh and her collaborators said they think they can overcome this obstacle by using optomechanical accelerometers as sensors to detect and amplify this oscillation.

"If the force is material dependent, by using two objects composed of different materials the amount that they are forced will be different, meaning that you would be able to measure that difference in acceleration between the two materials," said Manley, the paper's lead author.

Wilson, a quantum experimentalist and one of the UD team's collaborators, likened an optomechanical accelerometer to a miniature tuning fork. "It's a vibrating device which, due to its small size, is very sensitive to perturbations from the environment," he said.

Now, the researchers have proposed an experiment using a membrane made of silicon nitride and a fixed beryllium mirror to bounce light between the two surfaces. If the distance between the two materials changes, the researchers would know from the reflected light that dark photons were present because the silicon nitride and beryllium have different material properties.

Collaboration was a key part of developing the experiment's design, according to Manley. He and Singh (theorists) worked with Wilson and Dey Chowdhury (experimentalists) on the theoretical calculations that went into the detailed blueprint for building their proposed tabletop accelerometer sensor. Meanwhile, Grin, a cosmologist, helped shed light on the particle physics aspects of ultralight dark matter, such as why it would be ultralight, why it might couple to materials differently and how it might be produced.

As a theorist, Manley said the opportunity to learn more about how devices work and how experimentalists build things to prove the theories that he and Singh develop has deepened his expertise while simultaneously widening his exposure to possible career paths.

A growing body of work

Importantly, this latest work builds on previously published research by the collaborating teams, reported last summer in Physical Review Letters. The paper, which included contributions from former UD graduate student Russell Stump, showed that several existing and near-term laboratory-scale devices are sensitive enough to detect, or rule out, possible particles that could be ultralight dark matter.

The research reported that certain types of ultralight dark matter would connect, or couple, with normal matter in a way that would cause a periodic change in the size of atoms. While small fluctuations in the size of a single atom may be difficult to notice, the effect is amplified in an object composed of many atoms, and further amplification can be achieved if that object is an acoustic resonator. The collaboration evaluated the performance of several resonators made of diverse materials ranging from superfluid helium to single-crystalline sapphire, and found these sensors can be used to detect that dark matter-induced strain signal.

Both projects were supported in part through Singh's funding from the National Science Foundation to explore emerging ideas around using state-of-the-art quantum devices to detect astrophysical phenomena with tabletop technologies that are smaller and less expensive than other methods.

Together, Singh said, these papers extend the body of work on what is known about possible ways to detect dark matter and suggest the possibility of a new generation of table-top experiments.

Singh and Manley are working with other experimental groups, too, to develop additional tabletop sensors to look for such dark matter or other weak astrophysical signals. They also are actively cultivating broader discussions on this topic within the dark matter and quantum sensors communities.

For example, Singh recently discussed transformational instrumentation advances in particle physics detectors at a virtual workshop organized by the Department of Energy's Coordinating Panel for Advanced Detectors (CPAD). She also presented these results at a special workshop during the American Physical Society's April meeting.

"It's an exciting time, and I am learning a lot from the questions posed by scientists from diverse backgrounds at such workshops," said Singh. "But it's worth noting that my most original research ideas still come out of questions posed by curious students."

- This press release was originally published on UDaily. It has been edited for style