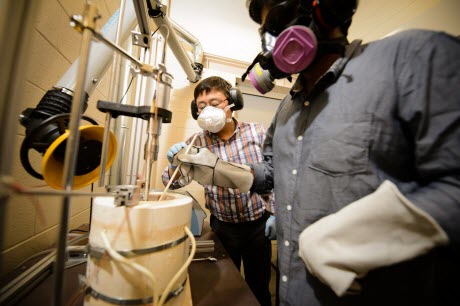 Hongseok Choi, left, works in his lab in the Fluor Daniel Engineering Innovation Building at Clemson University.Photo courtesy of Clemson UniversityCLEMSON — A Clemson University researcher is part of a team that has developed a new way of improving upon a lightweight metal, raising hopes it could be used to make a wide range of products more energy efficient, according to a paper that will be published Thursday in the journal Nature.

Hongseok Choi, an assistant professor of mechanical engineering, is among nine authors of a paper that describes a new method for processing magnesium, an abundant metal that is not harmful to living tissue.

The processed magnesium has a higher strength-to-weight ratio than any other known metal, he said. It also has enhanced strength under high temperatures and has high “ductility,” which means it can be elongated, Choi said.

“This clearly shows heavier materials can be replaced with lighter materials,” he said.

Melur “Ram” Ramasubramanian, chair of the Department of Mechanical Engineering, said that having the work published in Nature speaks volumes.

“Nature is among the world’s most prestigious scientific journals,” he said. “Congratulations to Dr. Choi and the entire team on a job well done.”

Magnesium shows promise because it’s abundant and lightweight, with a density two-thirds that of aluminum, Choi said. The downside is that magnesium weakens under heat, losing strength starting at 120 degrees Celsius.

But adding nanoparticles to the magnesium helps strengthen it, while making the metal more heat resistant and allowing it to retain its ductility, Choi said.

Researchers began their work by adding silicon carbide nanoparticles to molten magnesium. The main challenge was finding ways to keep the nanoparticles from clustering together at two separate stages of processing.

During continuous cycles of vibration, the bubbles continually expanded and contracted, growing as large as possible until they imploded. The high temperature and pressure generated by the implosions broke apart the clusters of nanoparticles, distributing them throughout the liquid magnesium.

But there was still another obstacle to overcome.

A solidification front moves through the liquid magnesium as it cools, pushing the nanoparticles and causing some to cluster back together.

Researchers did a theoretical analysis of the process physics and figured out they could solve the problem by increasing the volume of nanoparticles.

But that created another challenge. Too many nanoparticles would make it difficult to effectively distribute and disperse them with the ultrasonic waves.

Again, the research team came up with a solution.

Researchers also reported in the paper that the well-dispersed nanoparticles could be self-stabilized in molten magnesium.

“The processed magnesium alloy could be more stably deformed than was previously possible, accompanying enhancement of strength, stiffness, plasticity and high-temperature stability,” Choi said. “The ultra high-performance, lightweight alloys we can now produce would improve energy efficiency to meet energy and sustainability challenges in today’s society.”

The team sees the potential for aerospace, automotive, defense, mobile electronics and biomedical applications. Choi said one of the next steps is to show that the magnesium with a high volume fraction of nanoparticles can be processed at a larger scale.

“Although the method reported here is scalable in principle, many efforts are still needed to realize large-volume manufacturing for practical applications,” the team wrote in the paper.

Anand Gramopadhye, dean of the College of Engineering and Science, congratulated the team.

“Nature is a selective journal with global impact,” Gramopadhye said. “That Dr. Choi is on a team reporting its findings in Nature is a testament to his scholarship. It’s a well-deserved honor.”

The title of the paper is “Processing and properties of magnesium containing a dense uniform dispersion of nanoparticles.”