CHARLOTTE, NC — February 3, 2021 — New research on gender inequality indicates that fewer leadership prospects in the workplace apply even to women who show the most promise early on in their academic careers.

In their paper, published in a leading social science journal, Social Forces, the social scientists discovered that men supervise more individuals in the workplace than women, regardless of their grade point averages (GPAs) in high school. This leadership gap observed during individuals' early to mid-careers was particularly pronounced for those who became parents.

For those who earned a 4.0 GPA in high school, fathers manage more than four times the number of supervisees as mothers (19 for men versus four for women).

Additionally, having a higher GPA is strongly associated with managing more people later in their careers, but this is largely true only for fathers. As high school GPA increases from 0.0 to 4.0, the average number of supervisees increases from four to 19 for fathers but barely changes for mothers (increasing from three to four).

Perhaps even more striking is that fathers with very low academic achievement (1.0 GPAs), on average, have similar leadership prospects to women who completed high school with 4.0 GPAs.

"Our research clearly illustrates the barriers that exist for women, especially mothers, in the workplace," said Yavorsky. "At the same time, given that even men with low grades go on to attain higher leadership roles than women, this study highlights perhaps the lack of barriers that men face in securing greater leadership opportunities."

The researchers also examined why this large disparity emerged between mothers and fathers. They discovered that part of the leadership gap by GPA is due to the fact that high-achieving fathers benefit significantly from having a college or advanced degree, whereas comparable mothers do not. Indeed, the leadership opportunities of mothers who have a college degree or higher are similar to those of mothers who do not have a college degree.

The authors explain in their article that men may benefit more from having a college degree than women because men select into or are steered into majors that may offer more leadership opportunities, like those in finance or STEM.

Yavorsky also notes, "Based on other research, we know that even when men and women are in the same field, including female-dominated jobs, men still tend to have higher leadership prospects than women. This suggests that the disparity isn't just due to men and women selecting different career paths. Rather, men benefit in terms of their leadership opportunities regardless of the path they choose."

Additionally, the study found that among top achievers, men had higher leadership prospects than women because they tended to work longer hours in their jobs and had accumulated more work experience than women, particularly after they became parents. 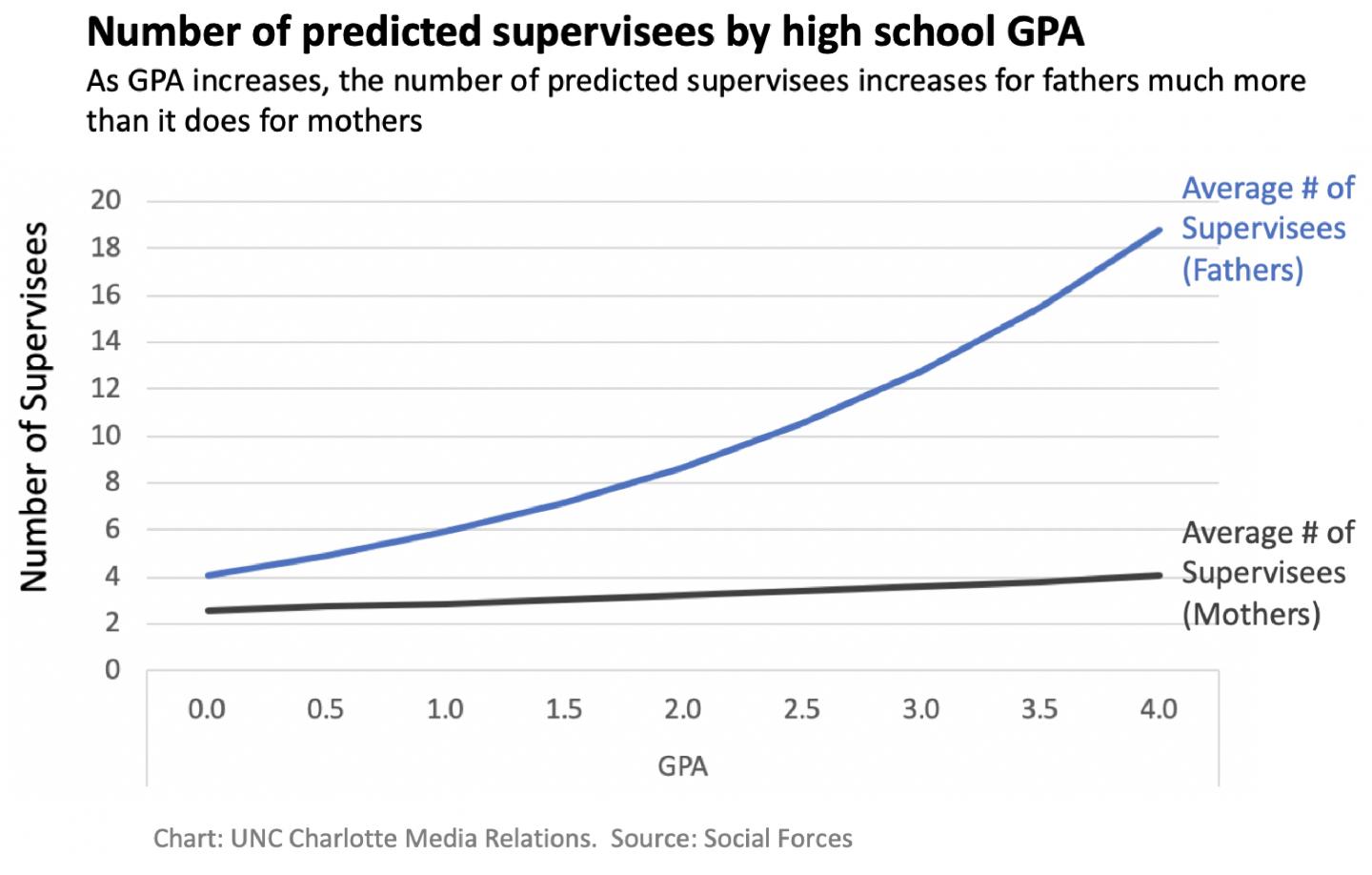 As GPA increases, the number of predicted supervises increases for fathers much more than it does for mothers.
UNC Charlotte

Yavorsky explained that mothers are more likely to have a disproportionate share of household duties than men, take parental leave and disrupt their careers to care for children or others in their family. As a result, men are often able to devote more time to their employers and attain critical job experience that may improve their chances for managerial promotions.

Importantly, even after these explanations, leadership disparities remain between high-achieving mothers and fathers, suggesting that bias and discrimination are also likely at play.

This study focused on a sample of about 5,000 people born between 1957 and 1964. The researchers had access to these individuals' high school transcript data and their responses to how many people they managed over a decade, from 1988 to 1998. According to Yavorsky, the survey used is the most current survey that includes GPA transcript data, tracks adolescents through their early- to mid-careers and captures the number of people they manage in their jobs.

"It is likely that these general patterns hold for younger cohorts, as recent research indicates that progress on many key measures for workplace gender equality has stalled or slowed since the mid-1990s," explained Yavorsky. "Additionally, contemporary research in the field indicates that the COVID-19 pandemic is more negatively affecting women's employment and productivity than men's, in large part because mothers are absorbing more of the responsibilities associated with school and child care closures. This pattern could further exacerbate gender disparities in job experience and therefore future advancement opportunities in the workplace."

Yavorsky noted two key governmental policy changes that could result in greater utilization of women's talent: 1.) subsidized child care to make it more affordable and reliable for all families, and; 2.) paid maternity and paternity leave that encourages fathers to contribute more equitably to household responsibilities from the start of parenthood. She also stated that organizations need to review and better standardize promotion practices to eliminate bias and discrimination, and they should create more pathways to management from female-dominated jobs.

- This press release was originally published on UNC Charlotte's Inside UNC Charlotte news website. It has been edited for style