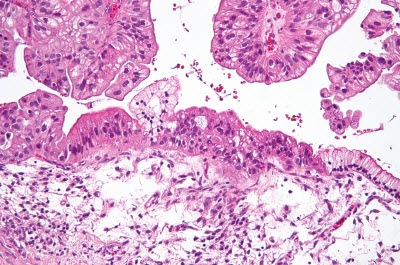 Micrograph of a mucinous ovarian carcinoma stained by H&E. Virginia Tech Scientists have found new ways of detecting the disease.Image credit: Nephron, Wikimedia CommonsCommonly known as "junk DNA," microsatellites are repetitive regions of DNA that have been associated with a variety of genetic diseases and are important to forensic testing and genomic mapping. The results were published in Oncotarget.

Ovarian cancer is the most lethal gynecological disease in the U.S., and the fifth most deadly cancer to women. According to the National Cancer Institute, in 2014 alone there were 21,980 new cases of ovarian cancer and 14,270 deaths. Risk factors include unexplained infertility and breast cancer, either in the family or experienced by the individual.

Difficult to diagnose in its early stages, ovarian cancer has a 50 percent mortality rate. Recent large-scale projects designed to complete a genomic profile of the disease tend not to adequately assess variation at microsatellites, which are virtually unplumbed regions of DNA waiting for further study and exploration.

However, a group led by Harold R. Garner, a professor in the departments of biological science, computer science, and basic science, has previously shown in a series of scientific publications that these previously untenable regions can be properly analyzed using computational techniques they have pioneered.

"Analysis of microsatellite variation offers us a rich perspective on the genomic profile of individuals and populations," said Natalie Fonville, a senior research scientist at the institute and lead author of the study. "Studying them with regard to ovarian cancer has yielded very compelling results that point us toward new diagnostics and possibly new therapies for the disease,"

To establish a baseline for variation in microsatellites, the research team analyzed 249 females of European ancestry from the 1000 Genomes Project. They then compared them with an ethnically matched set of ovarian cancer patients in The Cancer Genome Atlas. Sixty genetic locations were found to be indicative of ovarian cancer, and 15 were found to be shared with breast cancer, which may be useful for identifying broad-spectrum cancer risks.

Researchers hope the findings will aid in the development of diagnostic tools to detect the possibility of cancer before it progresses to a stage which is less responsive to therapy. Virginia Tech has licensed these finding to Genomeon, a company co-founded by Garner.

"Genomeon desires to bring these findings to the clinic in the next year, which could greatly impact ovarian (and other) cancer patients," Garner said.