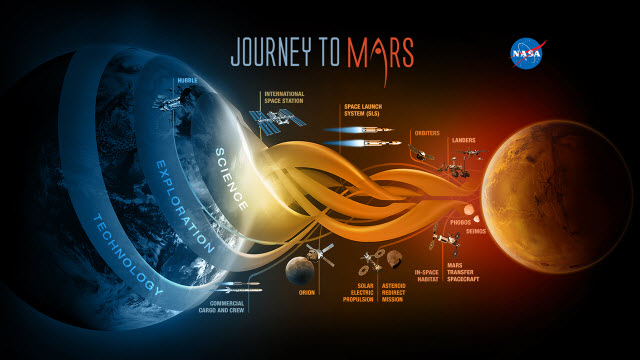 NASA is developing the capabilities needed to send humans to an asteroid by 2025 and Mars in the 2030s—goals outlined in the bipartisan NASA Authorization Act of 2010 and in the U.S. National Space Policy, also issued in 2010. Researchers at the Wake Forest Institute for Regenerative Medicine and colleagues are using human stem cells to measure the effects of the deep space radiation astronauts would encounter during the journey to Mars.Image credit: NASA

WINSTON-SALEM, N.C.  – Sending a manned mission to Mars requires more than a powerful launch rocket. Prep work also includes learning how a three-year space flight could affect the human body. With funding from the National Aeronautics and Space Administration (NASA), researchers at the Wake Forest Institute for Regenerative Medicine and colleagues are using human stem cells to measure the effects of deep space radiation.

Using mice transplanted with human stem cells, the research team has demonstrated for the first time that the radiation encountered in deep space travel may increase the risk of leukemia in humans.

“Our results are troubling because they show radiation exposure could potentially increase the risk of leukemia in two ways,” said Christopher Porada, PhD, associate professor of regenerative medicine and senior researcher on the project.

As part of this ongoing project, the group has identified and is currently testing a common dietary supplement for its ability to protect astronauts from these damaging effects.

“It is rewarding to use our expertise in stem cells to help NASA evaluate the potential health risks of space travel and hopefully develop strategies to address them,” said Porada.

Radiation exposure is believed to be one of the most dangerous aspects of traveling to Mars, according to NASA. The average distance to the red planet is 140 million miles, and a roundtrip could take three years.

The goal of the study, published in the journal Leukemia, was to assess the direct effects of simulated solar energetic particles (SEP) and galactic cosmic ray (GCR) radiation on human hematopoietic stem cells (HSCs). These stem cells comprise less than 0.1% of the bone marrow of adults, but produce the many types of blood cells that circulate through the body and work to transport oxygen, fight infection, and eliminate any malignant cells that arise.

For the study, human HSCs from healthy donors of typical astronaut age (30-55 years) were exposed to Mars mission-relevant doses of protons and iron ions—the same types of radiation that astronauts would be exposed to in deep space—at the NASA Space Radiation Laboratory at Brookhaven National Laboratory. Researchers at the Wake Forest Institute for Regenerative Medicine then performed laboratory and animal studies to define the impact of the exposure.

These exposure levels that simulated deep space radiation were found to dramatically affect the health and function of the HSCs. “Radiation exposure at these levels was highly deleterious to HSC function, reducing their ability to produce almost all types of blood cells, often by 60-80 percent,” said Porada. “This could translate into a severely weakened immune system and anemia during prolonged missions in deep space.”

Previous studies by other researchers had already demonstrated that exposure to high doses of earthly radiation, such as from X-rays, can have harmful (even life-threatening) effects on the body’s ability to make blood cells, and can significantly increase the likelihood of cancers, especially leukemias. However, the current study was the first to show a damaging effect of low, mission-relevant doses of space radiation.

The current study is significant because it shows that radiation affected cells at the stem cell level. It caused mutations in genes involved in the hematopoietic process, and it dramatically reduced the ability of HSCs to give rise to mature blood cells.

The next step was to assess how the cells would function in the body. Mice were transplanted with GCR-irradiated human HSCs, essentially “humanizing” the animals. The mice developed what appears to be T-cell acute lymphoblastic leukemia—the first demonstration that exposure to space radiation may increase the risk of leukemia in humans.

“Our results show radiation exposure could potentially increase the risk of leukemia in two ways,” said Porada. “We found that genetic damage to HSCs directly led to leukemia. Secondly, radiation also altered the ability of HSCs to generate T and B cells, types of white blood cells involved in fighting foreign ‘invaders’ like infections or tumor cells. This may reduce the ability of the astronaut's immune system to eliminate malignant cells that arise as a result of radiation-induced mutations.”

Porada said the findings are particularly troubling given previous work showing that conditions of weightlessness/microgravity present during spaceflight can also cause marked alterations in astronaut’s immune function, even after short duration missions in low earth orbit, where they are largely protected from cosmic radiation. Taken together, the results indicate that the combined exposure to microgravity and SEP/GCR radiation that would occur during extended deep space missions, such as to Mars, could potentially exacerbate the risk of immune-dysfunction and cancer.

NASA’s Human Research Program is exploring not only the effects of radiation, but also conditions of microgravity, isolation, and confinement, hostile and closed environments, and distance from earth. The ultimate goal of the research is to make space missions as safe as possible.

Transmission Risk of Airborne Viruses Can Be Quantified

Transmission Risk of Airborne Viruses Can Be Quantified

New Evidence of Health Threat from Marijuana and Tobacco Smoke

New Evidence of Health Threat from Marijuana and Tobacco Smoke