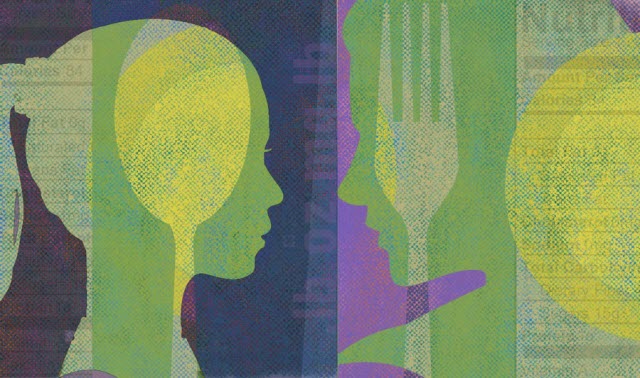 In a new analysis of parent-child diet quality and calories consumed, a team of seven researchers found the two are related in significant ways.Illustration credit: Jeffrey Chase

Now researchers are suggesting there may be a lesser-known corollary—"Your kids are what you eat."

In a new analysis of parent-child diet quality and calories consumed, a team of seven researchers found the two are related in significant ways, a connection that could lead to better strategies as the nation works to address the growing public health problems of obesity and related conditions such as heart disease, stroke, and diabetes.

Related Article: Can Plastic Program Your Baby to Be Obese?

According to the U.S. Centers for Disease Control and Prevention, more than a third of U.S. adults are obese and about 17 percent of the nation's youth (ages 2-19) are obese.

As dietary details emerged for hundreds of parents and children who participated in the study, the overall picture wasn't pretty.

"Unfortunately people are not doing very well in terms of diet quality," said Shannon Robson, assistant professor of behavioral health and nutrition at the University of Delaware and the lead author of the report, published recently in the Journal of the Academy of Nutrition and Dietetics. "Parents had better diet quality than kids, but only by a little bit."

The analysis draws on data from a Neighborhood Impact on Kids study that looked at 698 parent-child duos to better understand obesity and related behaviors. The children were 6 to 12 years old and all lived in King County, Washington, or San Diego County, California, when the study was done from 2007 to 2009.

To get a sampling of dietary practice, researchers looked at up to three random days of eating data for each twosome, including at least one weekday and one weekend day. More than 98 percent of participants reported three days of dietary data.

They analyzed the data using the Healthy Eating Index of 2010 (HEI-2010), the Dietary Approaches to Stop Hypertension (DASH) score, and energy density (calories per gram of food). The HEI-2010 looks at 12 dietary components, including empty calories, to assess overall quality, while the DASH score looks at eight food groups to measure intake of foods groups like vegetables, fruit and low-fat dairy products.

Overall, parents had a higher score on both measures of diet quality, but on average managed just 64.5 percent of optimal levels on the HEI-2010 and just 56.6 percent of the optimal DASH score. Kids averaged 58.3 and 54.3 percent, respectively.

Caloric intake was more similar, with children eating an average of 1,751 calories per day and parents 1,763.

After controlling for demographics, neighborhood type, and body-mass index, researchers found parental diet to be the strongest predictor of a child's diet quality.

They found two clear culprits for poorer diet quality among children: too few vegetables and too many empty calories.

Researchers said the data were limited by several factors, with particular mention of ethnic and/or racial diversity among participants. Most participating parents were mothers and researchers said some bias might be a factor in how parents report data for their children.

Robson joined the UD faculty last fall, bringing this work with her from the Cincinnati Children's Hospital Medical Center, where she was a post-doctoral fellow. She earned her bachelor's degree in nutritional sciences and dietetics at UD, and her master's and doctorate degrees at the University of Tennessee.

The study was supported by grants from the National Institutes of Health and the U.S. Department of Agriculture.