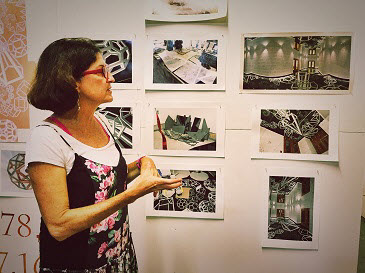 Engineering professor Jose Luis Contreras-Vidal has received a grant from the National Science Foundation to track neural activity as people both make and view art.

The grant is one of 16 announced as part of the NSF’s Brain Initiative, an effort to accelerate the development of neurotechnologies that can help answer fundamental questions about the brain.

Contreras-Vidal, Hugh Roy and Lillie Cranz Cullen Distinguished Professor of electrical and computer engineering, will work with Blaffer Art Museum, a contemporary art museum on the UH campus, and  with artist Jo Ann Fleischhauer as she conceives, plans and creates a large-scale installation.

Collaborators on the grant include Claudia Schmuckli, director and chief curator of Blaffer; James Rosengren, Blaffer’s deputy director; Badri Roysam, chairman of the Department of Electrical and Computer Engineering at UH, and Saurabh Prasad, assistant professor of electrical and computer engineering.

Fleischhauer has a long-standing interest in science, serving as artist-in-residence at the University of Texas Health Science Center’s Department of Nanomedicine and Biomedical Engineering in 2010-2012.

She hopes to do more than provide data for the researchers. “I think it will be very interesting to learn how we influence each other,” she said.

“Is there a true intersection between art and science? I don’t know. I find that scientists think a little differently than artists do. It’s challenging in terms of finding that equal footing, where the art isn’t just illustrating the science, and the science isn’t just dabbling in the art.”

Fleischhauer will wear a headset designed for the project, fitted with up to 64 sensors to track brain activity as she thinks about, designs and produces the work. Blaffer also will host two other components of the research: Museum visitors will be allowed to check out headsets fitted with electrodes to track brain activity as they view the exhibits, and several artists will wear the headsets as they create art or perform music in a space at the museum.

Rosengren said the headsets will be available by the Sept. 26 opening of an exhibition by British-Nigerian artist and filmmaker Zina Saro-Wiwa, “Did You Know We Taught Them How to Dance?” and “Time/Image,” an international group exhibition investigating artistic and cinematic engagements with questions of time.

He has positioned Blaffer as a catalyst for cross-disciplinary dialogue, working with a committee from across campus and the community to create the Blaffer Art Museum Innovation Series, which last spring sponsored talks and performances in conjunction with an Alzheimer’s-themed exhibition, “Janet Biggs: Echo of the Unknown.”

Contreras-Vidal and choreographer Rebecca Valls, associate professor of dance, met through the series, and he recorded Valls’ brain activity during a public performance.

Rosengren said the possibilities for cross-disciplinary collaboration are unlimited.

“Artists and engineers are going to benefit equally, as each learns about how the other sees the world,” he said. “The kind of creative thinking required to solve today’s complex challenges is embodied in interdisciplinary investigation.”

The collaboration with Valls wasn’t Contreras-Vidal’s first foray into the marriage of art and science. He collected brain activity data from about 450 people as they viewed artist Dario Robleto’s work at the Menil Collection last winter, and the results will be published later this year. Robleto will participate in this work through Blaffer.

This latest work builds on those experiences, using “real world” data about brain activity instead of  the more common, lab-based collection, with people reacting to images on a computer screen or an otherwise controlled situation.

Contreras-Vidal notes that science and art were more closely related during the Renaissance, with Leonardo da Vinci as the prime example. This research seeks to bring them together once more.

Ultimately, the work could have clinical applications, allowing people to learn to channel their creativity, perhaps, or providing insights into the regulation of emotions and expressive movements, traits which are lost with Parkinson’s disease and other conditions.

Count Fleischhauer in, although she worries about the act of creativity losing some of its magic.

“There is a part of me that is completely fascinated with, ‘Are they going to find something?’ But,” she said, “there is something very beautiful about the mystery.”