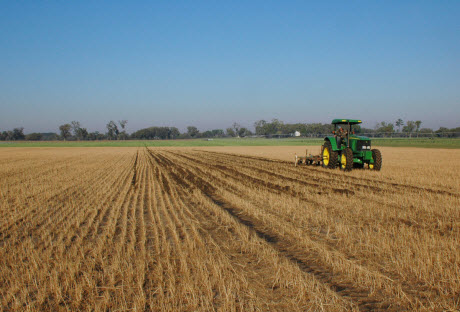 To do this, Md Ali Babar, a UF/IFAS agronomy assistant professor and his team of researchers, hope to increase the harvest index from 45 to 60 percent, which translates to much more wheat. The harvest index quantifies a crop’s yield versus the amount of biomass—shoots and roots—that it produces.

“This will increase wheat yield and improve food security for a growing population,” Babar said.

Wheat, grown on more than 538 million acres globally, is one of the three most important cereal crops in the world, according to Babar. The other two are rice and corn. But wheat yield must be doubled in the next 30 years “to avert a major food crisis,” he said. To achieve food security in the next 30-plus years, wheat yields need to increase by 1.8 percent per year. Currently, yields are only increasing 0.9 percent annually.

Babar cites the so-called “Green Revolution” of the 1970s in explaining how and why his research group hopes to increase wheat production. In the 1970s, scientists increased the harvest index. That resulted in a huge yield increase and saved millions of people’s lives. However, research shows the wheat harvest index didn’t increase much in recent history.

That’s why Babar and his collaborators are adopting an integrated research approach involving varieties developed by U.S. and Mexican wheat breeders. In those varieties, Babar and his colleagues will evaluate traits related to the harvest index, hoping to eventually produce more wheat.

Babar will work with scientists from the International Corn and Wheat Improvement Center in Mexico, the University of Nottingham in England, and the U.S. Department of Agriculture.

The researchers are expected to develop a specific structure of wheat plants so they can separate more biomass genes, which they hope will add up to much more wheat globally.

They have received $250,000 for the first year of a three-year grant from the National Institute of Food and Agriculture, part of the U.S. Department of Agriculture. NIFA officials have told Babar that he and his team will receive $920,000 based upon continued progress in the research and funding.