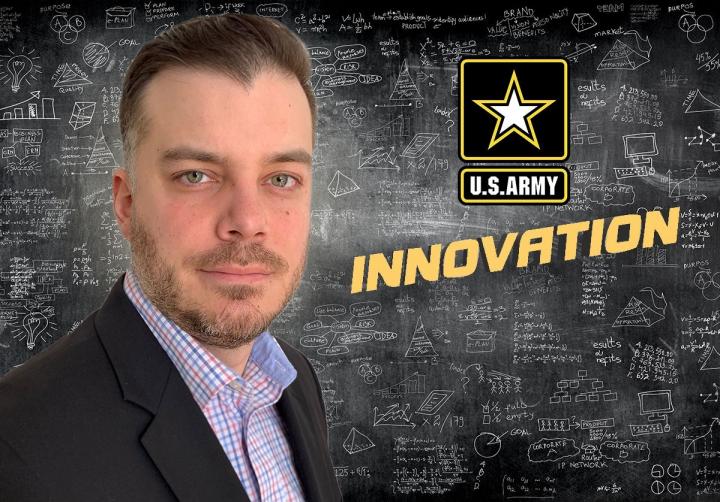 Hard armors use ceramic materials that are lightweight but also strong, and therefore an ideal material to defeat ballistic threats; however, ceramics are among the most challenging to develop and manufacture, and can be prone to variability in performance.

Golt used a combination of research automation and artificial intelligence to reimagine the traditional but slow process of experimental data collection of materials, which typically includes a lengthy process to manually characterize, analyze, adjust, and repeat.

"By disrupting the traditional R&D models of the past, tangible and high-impact products are being developed at an increased pace by Army scientists and quickly transitioned to today's soldier," Golt said.

Golt developed a system that uses robotics to automate the characterization of the structure of each specimen to be tested. A researcher can load hundreds of ceramic specimens at one time onto a testing surface. The robot selects an individual specimen, collects electrical measurements across the surface—which captures key characteristics and variations in the internal structure of the specimen—and non-destructively characterizes the materials without human intervention.

To guide the ballistic testing, the laboratory developed an artificial intelligence algorithm that uses the characterization dataset and real-time learning algorithms. This algorithm accompanies the researchers at the ballistic testing range and literally calls the shots, specifying for the range operator the next best specimen and projectile velocity that will maximize researchers' understanding of the processing-structure-performance relationships. The result is rapid discovery using far fewer ballistic tests and decreased uncertainty.

The lab has worked with an industrial manufacturing partner to design an optimal process, discover high-performing armor ceramics, and validate through testing that the ceramics substantially increase the protection level for soldiers. Best of all, because these rapid discoveries were obtained on a production-level industrial process, the material is ready to be manufactured in high volumes for immediate use.

- This press release was originally published on the US Army website. It has been edited for style