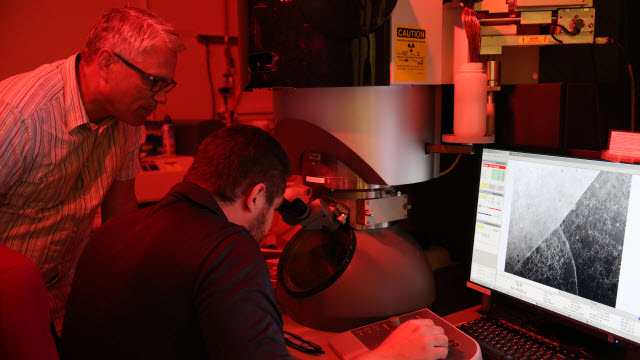 "Marine grade" stainless steel is valued for its performance under corrosive environments and for its high ductility—the ability to bend without breaking under stress—making it a preferred choice for oil pipelines, welding, kitchen utensils, chemical equipment, medical implants, engine parts, and nuclear waste storage. However, conventional techniques for strengthening this class of stainless steels typically comes at the expense of ductility.

Lawrence Livermore National Laboratory (LLNL) researchers, along with collaborators at Ames National Laboratory, Georgia Tech University and Oregon State University, have achieved a breakthrough in 3D printing one of the most common forms of marine grade stainless steel—a low-carbon type called 316L—that promises an unparalleled combination of high-strength and high-ductility properties for the ubiquitous alloy. The research appears online Oct. 30 in the journal Nature Materials.

"In order to make all the components you're trying to print useful, you need to have this material property at least the same as those made by traditional metallurgy," said LLNL materials scientist and lead author Morris Wang. "We were able to 3D print real components in the lab with 316L stainless steel, and the material's performance was actually better than those made with the traditional approach. That's really a big jump. It makes additive manufacturing very attractive and fills a major gap." 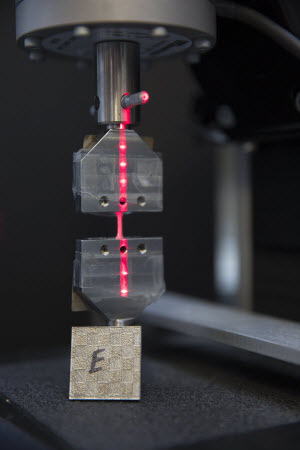 Researchers say the ability to 3D print marine grade, low-carbon stainless steel (316L) could have widespread implications for industries such as aerospace, automotive, and oil and gas.Photo credit: Kate Hunts/LLNLWang said the methodology could open the floodgates to widespread 3D printing of such stainless steel components, particularly in the aerospace, automotive and oil and gas industries, where strong and tough materials are needed to tolerate extreme force in harsh environments.

To successfully meet, and exceed, the necessary performance requirements for 316L stainless steel, researchers first had to overcome a major bottleneck limiting the potential for 3D printing high-quality metals, the porosity caused during the laser melting (or fusion) of metal powders that can cause parts to degrade and fracture easily. Researchers addressed this through a density optimization process involving experiments and computer modeling, and by manipulating the materials' underlying microstructure.

"This microstructure we developed breaks the traditional strength-ductility tradeoff barrier," Wang said. "For steel, you want to make it stronger, but you lose ductility essentially; you can't have both. But with 3D printing, we're able to move this boundary beyond the current tradeoff."

"The key was doing all the characterization and looking at the properties we were getting," said LLNL scientist Alex Hamza, who oversaw production of some additively manufactured components. "When you additively manufacture 316L it creates an interesting grain structure, sort of like a stained-glass window. The grains are not very small, but the cellular structures and other defects inside the grains that are commonly seen in welding seem to be controlling the properties. This was the discovery. We didn't set out to make something better than traditional manufacturing; it just worked out that way."

LLNL postdoc researcher Thomas Voisin, a key contributor to the paper, has performed extensive characterizations of 3D printed metals since joining the lab in 2016. He believes the research could provide new insights on the structure-property relationship of additively manufactured materials. 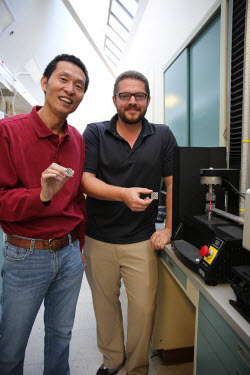 LLNL scientist Morris Wang (left) and postdoc researcher Thomas Voisin played key roles in a collaboration that successfully 3D printed one of the most common forms of marine grade stainless steel that promises to break through the strength-ductility tradeoff barrier.Photo credit: Kate Hunts/LLNL"Deformation of metals is mainly controlled by how nanoscale defects move and interact in the microstructure," Voisin said. "Interestingly, we found that this cellular structure acts such as a filter, allowing some defects to move freely and thus provide the necessary ductility while blocking some others to provide the strength. Observing these mechanisms and understanding their complexity now allows us to think of new ways to control the mechanical properties of these 3D printed materials."

Wang said the project benefitted from years of simulation, modeling and experimentation performed at the Lab in 3D printing of metals to understand the link between microstructure and mechanical properties. He called stainless steel a "surrogate material" system that could be used for other types of metals.

The eventual goal, he said, is to use high-performance computing to validate and predict future performance of stainless steel, using models to control the underlying microstructure and discover how to make high-performance steels, including the corrosion-resistance. Researchers will then look at employing a similar strategy with other lighter weight alloys that are more brittle and prone to cracking.

The work took several years and required the contributions of the Ames Lab, which did X-ray diffraction to understand material performance; Georgia Tech, which performed modeling to understand how the material could have high strength and high ductility, and Oregon State, which performed characterization and composition analysis.