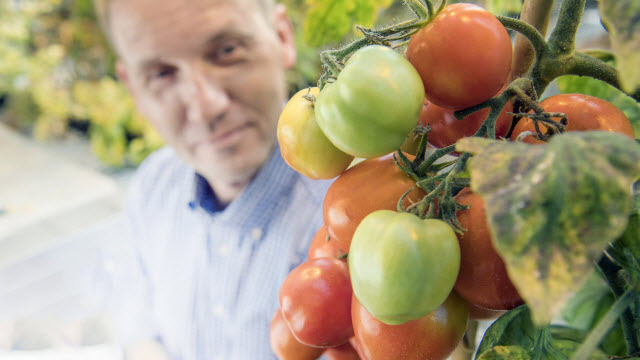 Michael Gutensohn is researching how to protect vegetable plants from aphids through metabolic engineering.Photo courtesy of West Virginia University

Michael Gutensohn, assistant professor of horticulture and Ray Marsh and Arthur Pingree Dye Professor, and Yong-Lak Park, associate professor of entomology, are working to combat a critical issue concerning piercing-sucking pests that serve as carriers of plant diseases. Their efforts are being bolstered by a $150,000 grant from the Agriculture and Food Research Initiative Pest and Beneficial Species Program, administered by the USDA National Institute of Food and Agriculture.

“A lot of horticultural crops are produced in controlled environments—so in greenhouses, high tunnels, and growth chambers—and that brings about a particular set of problems because it’s a very artificial environment,” Gutensohn said.

Without rainfall, wind and other natural, physical forces, a favorable setting is created in such environments for small pests like aphids—soft-bodied insects that feed off the nutritious, vascular parts of the plant. Gutensohn explained that they don’t actually consume leaf tissue like their biting-chewing counterparts, such as beetles or caterpillars; rather, they poke at the plant using their piercing mouthparts, called stylets, to feed on the highly concentrated sugar solution.

“The stylet of an aphid is so microscopically small that it doesn’t create huge damage to the tissue of the plant itself,” Gutensohn explained, noting that with even several aphids feeding on a plant, it would not present a real threat.

“But, the problem is that a lot of these piercing-sucking insects are basically hijacked by plant diseases—in particular, viruses,” Gutensohn said. “So, that means that even a very low level of infestation by some of these insects can create a huge problem.”

One current remedy is the use of synthetic insecticides, but that strategy has its drawbacks.

“If you do that (use synthetic insecticides) too intensely, you’re creating resistances, or so-called avoidance behavior on the pest side,” Gutensohn said. “Either the insecticide just doesn’t work on them anymore or they just try to avoid it…they sit on the lower side of the leaf, and you spray on top.”

Other disadvantages relate to cost and consumer options.

“Every time you spray, it’s an investment—it costs the grower and takes away from their revenue,” Gutensohn continued. “And then, last but not least, we consumers don’t necessarily like it. There’s always the fear, whether it’s true or not, that this might affect your health or the environment.”

Consequently, the need to find a more sustainable, biologically-based, and environmentally-sound pest control strategy is highly desirable, so Gutensohn and Park are turning to metabolic engineering, which attempts to introduce genes for defensive traits into plants while considering the feeding behavior of aphids. Their proof-of-principle approach uses wild and cultivated tomato lines as test subjects.

“Wild plants are always very well-adapted for defending themselves against pests because they’re constantly under selection pressure to survive,” Gutensohn said.

When tomatoes are bred for commercial and economic purposes, inevitably, some of their defensive traits are lost. Through metabolic engineering, Gutensohn and Park are trying to recover a specific trait that can serve as a natural repellent to aphids—the production of volatile terpenes, or scent compounds.

Essentially, the goal is to recreate what happens in nature.

“We are trying to create tomato lines that are producing these terpenes, not throughout the whole plant, but just in certain cells or tissues of the tomato plant that are particularly relevant for the feeding of an aphid,” Gutensohn explained. “Instead of spraying something, which is completely artificial, we need to really look at how this is done naturally.

“It’s still genetic or metabolic engineering, but we can try to be as close as possible to how nature would do it, and by doing that, we’re not harming the plant or other organisms that we don’t want to harm and, in particular, we’re not exposing humans to chemicals that we don’t necessarily want to expose them to.”

The over-arching objective of the two-year project is to obtain plant lines and base-line data for seeking further research opportunities that will eventually lead to the ultimate goal: develop a novel pest management strategy to control aphids and transmittable viruses.

“In the end, we hope this is a far more sustainable approach to pest control,” Gutensohn said. “This matters, I think, to everyone who is affected by this—the farmer or grower because it’s less of a risk of losing crops and it’s less of an investment because you don’t have to spray, which, again, can be good for the consumer.”