This short film provides an overview of the autumn 2015 expedition to the Guliya Glacier in Tibet to drill ice cores which could yield some of the oldest ice on the planet. The film was created by BPCRC media specialist Pam Theodotou using field footage collected by expedition member Giuliano Bertagna.

New Orleans—The oldest ice core ever drilled outside the polar regions may contain ice that formed during the Stone Age—more than 600,000 years ago, long before modern humans appeared.

Researchers from the United States and China are now studying the core—nearly as long as the Empire State Building is tall—to assemble one of the longest-ever records of Earth’s climate history.

What they’ve found so far provides dramatic evidence of a recent and rapid temperature rise at some of the highest, coldest mountain peaks in the world.

At the American Geophysical Union meeting on Thursday, Dec. 14, they report that there has been a persistent increase in both temperature and precipitation in Tibet’s Kunlun Mountains over the last few centuries. The change is most noticeable on the Guliya Ice Cap, where they drilled the latest ice core. In this region, the average temperature has risen 1.5 degrees Celsius (2.7 degrees Fahrenheit) in the last 50 years and the average precipitation has risen by 2.1 inches per year over the past 25 years.

Lonnie Thompson, Distinguished University Professor in the School of Earth Sciences at The Ohio State University and co-leader of the international research team, said that the new data lend support to computer models of projected climate changes.

“The ice cores actually demonstrate that warming is happening, and is already having detrimental effects on Earth’s freshwater ice stores,” Thompson said. 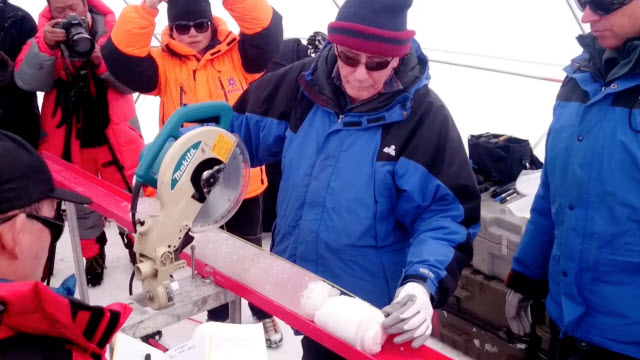 Lonnie Thompson cuts an ice core retrieved from the Guliya Ice Cap in the Kunlun Mountains in Tibet in 2015.Photo credit: Giuliano Bertagna, courtesy of the Byrd Polar and Climate Research Center.

Earth’s largest supply of freshwater ice outside of the Arctic and Antarctica resides in Tibet—a place that was off limits to American glaciologists until 20 years ago, when Ohio State’s Byrd Polar and Climate Research Center (BPCRC) began a collaboration with China’s Institute of Tibetan Plateau Research. There, glaciologist Yao Tandong secured funding for a series of joint expeditions from the Chinese Academy of Sciences.

“The water issues created by melting ice on the Third Pole, along with that from the Arctic and Antarctica, have been recognized as important contributors to the rise in global sea level. Continued warming in these regions will result in even more ice melt with the likelihood of catastrophic environmental consequences,” Yao noted.

The name “Third Pole” refers to high mountain glaciers located on the Tibetan Plateau and in the Himalaya, in the Andes in South America, on Kilimanjaro in Africa, and in Papua, Indonesia—all of which have been studied by the Ohio State research team.

Of particular interest to the researchers is a projection from the Intergovernmental Panel on Climate Change that future temperatures on the planet will rise faster at high altitudes than they will at sea level. The warming at sea level is expected to reach 3 degrees Celsius by the year 2100, and possibly double that, or 6 degrees Celsius, at the highest mountain peaks in the low latitudes.

“The stable isotopic records that we’ve obtained from five ice cores drilled across the Third Pole document climate changes over the last 1,000 years, and contribute to a growing body of evidence that environmental conditions on the Third Pole, along with the rest of the world, have changed significantly in the last century,” Thompson said. “Generally, the higher the elevation, the greater the rate of warming that’s taking place.”

Around the world, hundreds of millions of people depend on high-altitude glaciers for their water supply. The Guliya Ice Cap is one of many Tibetan Plateau ice caches that provide fresh water to Central, South, and Southeast Asia.

“There are over 46,000 mountain glaciers in that part of the world, and they are the water source for major rivers,” Thompson said.

In September and October of 2015, the team ventured to Guliya and drilled through the ice cap until they hit bedrock. They recovered five ice cores, one of which is more than 1,000 feet long.

The cores are composed of compressed layers of snow and ice that settled on the western Kunlun Mountains year after year. In each layer, the ice captured chemicals from the air and precipitation during wet and dry seasons. Today, researchers analyze the chemistry of the different layers to measure historical changes in climate.

Based on dating of radioactive elements measured by scientists at the Swiss research center ETH Zurich, the ice at the base of the core may be at least 600,000 years old.

The oldest ice core drilled in the Northern Hemisphere was found in Greenland in 2004 by the North Greenland Ice Core Project and was dated to roughly 120,000 years, while the oldest continuous ice core record recovered on Earth to date is from Antarctica, and extends back 800,000.

Over the next few months, the American and Chinese research teams will analyze the chemistry of the core in detail. They will look for evidence of temperature changes caused by ocean circulation patterns in both the North Atlantic and tropical Pacific Oceans, which drive precipitation in Tibet as well as the Indian monsoons. For instance, one important driver of global temperatures, El Niño, leaves its chemical mark in the snow that falls on tropical glaciers.

Ultimately, researchers hope the work will reveal the linkages that exist between ice loss in tropical mountain glaciers and climate processes elsewhere on the planet. Thompson, Yao, and German ecologist Volker Mosbrugger are co-chairing a Third Pole Environment Program to focus on basic science and policy-relevant issues.

“The more we study the different components of the environment of the Third Pole, the better we understand climate change and its linkages among Earth’s three polar regions,” Yao said.