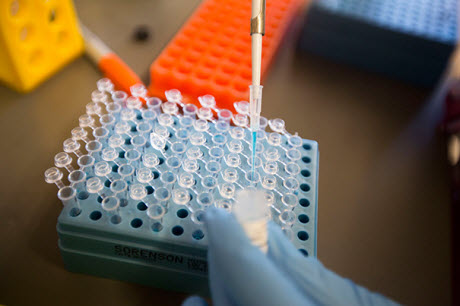 Researchers have demonstrated that any mature adult cell has the potential to turn into the equivalent of an embryonic stem cell. “It may not be necessary to create an embryo to acquire embryonic stem cells," explained senior author Charles Vacanti, who is the Vandam/Covino Professor of Anaesthesia at Harvard Medical School.Photo credit: Kris Snibbe/Harvard Staff PhotographerSince the discovery of human embryonic stem cells, scientists have had high hopes for their use in treating a wider variety of diseases because they are “pluripotent,” which means they are capable of differentiating into one of many cell types in the body.

However, the acquisition of human embryonic stem cells from an embryo can cause the destruction of the embryo, thus raising ethical concerns. In 2006, researchers introduced an alternative to harvesting embryonic stem cells called induced pluripotent stem (iPS) cells. They provided evidence that it was possible to send a normal adult cell back to an undifferentiated, pluripotent stem cell state by introducing genetic material (“outside” DNA) into the cell, a process that alters the original state of the cell.

Now, researchers from Harvard University-affiliated Brigham and Women’s Hospital (BWH), in collaboration with the RIKEN Center for Developmental Biology in Japan, have demonstrated that any mature adult cell (a “somatic” cell) has the potential to turn into the equivalent of an embryonic stem cell. In an article to be published in the Jan. 30 issue of Nature, researchers demonstrate, in a preclinical model, a novel and unique way that cells can be reprogrammed, a phenomenon they call stimulus-triggered acquisition of pluripotency (STAP). Importantly, this process does not require the introduction of new outside DNA, the process commonly used to induce adult cells back into a state of pluripotentency.

“It may not be necessary to create an embryo to acquire embryonic stem cells. Our research findings demonstrate that creation of an autologous pluripotent stem cell — a stem cell from an individual that has the potential to be used for a therapeutic purpose without an embryo — is possible. The fate of adult cells can be drastically converted by exposing mature cells to an external stress or injury. This finding has the potential to reduce the need to utilize both embryonic stem cells and DNA-manipulated iPS cells,” said senior author Charles Vacanti, chairman of the Department of Anesthesiology, Perioperative and Pain Medicine and director of the Laboratory for Tissue Engineering and Regenerative Medicine at BWH. “This study would not have been possible without the significant international collaboration between BWH and the RIKEN Center,” he added.

Researchers, drawing from the ability of a plant callus — a node of plant cells that is created by injuring an existing plant — to grow into a new plant, hypothesized that any mature adult cell, once differentiated into a specific cell type, could be de-differentiated through a natural process that does not require inserting genetic material into the cells.

“Could simple injury cause mature, adult cells to turn into stem cells that could in turn develop into any cell type?” hypothesized Vacanti.

Beginning with mature adult cells, researchers let them multiply. After stressing the cells almost to the point of death by exposing them to stresses including trauma, a low oxygen environment, and an acidic environment, researchers discovered that within a period of only a few days, the cells survived and recovered from the stressful stimulus by naturally reverting into a state that is equivalent to an embryonic stem cell. The stem cells created by exposure to the external stimuli were then able to redifferentiate and mature into any type of cell and grow into any type of tissue, depending on the environment into which they were placed.

To examine the growth potential of these cells, researchers used mature blood cells from mice that had been genetically altered with a specific mutation to light up green under a specific wavelength of light. They stressed the cells from the blood by exposing them to an acidic environment and found that in the days following the stress, those cells reverted back to an embryonic stem cell-like state.

Researchers hypothesize that these findings raise the possibility that unknown cellular functions that are activated through external stress may set mature adult cells free from their current commitment and permit them to revert to their naïve cell state.

“Our findings suggest that somehow, through part of a natural repair process, mature cells turn off some of the epigenetic controls that inhibit expression of certain nuclear genes that result in differentiation,” said Vacanti, who is the Vandam/Covino Professor of Anaesthesia at Harvard Medical School.

Researchers note that the next step is to explore this process in more sophisticated mammals and ultimately in humans.

“If we can work out the mechanisms by which differentiation states are maintained and lost, it could open up a wide range of possibilities for new research and applications using living cells. But for me, the most interesting questions will be the ones that let us gain a deeper understanding of the basic principles at work in these phenomena,” said first author Haruko Obokata, a research fellow in anesthesiology at BWH.

If this same process can be demonstrated in human cells, then someday, through a skin biopsy or blood sample, without the need for genetic manipulation, researchers may be able to create embryonic stem cells specific to each individual, which in turn could be used to create tissue without the need to insert any outside genetic material into that cell, creating endless possibilities for therapeutic options.

This was adapted by Harvard University from a Brigham and Women’s Hospital release.