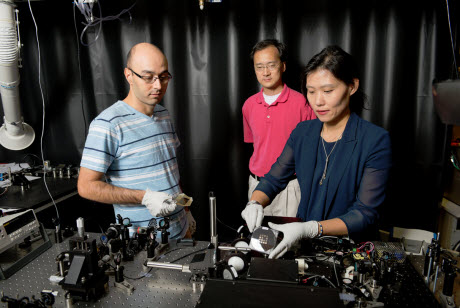 From left, graduate student Mohammad Parvinnezhad Hokmabadi, Dr. Patrick Kung, and Dr. Seongsin Margaret Kim work with the terahertz metamaterial in Shelby Hall.Photo courtesy of the University of AlabamaTUSCALOOSA, Ala. — Researchers at the University of Alabama designed and made a material that manipulates the speed of light in a new, more effective way than previous methods, according to findings recently published in Scientific Reports by the Nature Publishing Group.

The research by two professors and three grad students in the UA College of Engineering could help in creating next-generation optical networks and sensors that rely on variances in the speed of light.

“Slow light will lead to the development of optical buffers and delay lines as essential elements of future ultrafast all optical communication networks that could meet the ever-increasing demands for long-distance communications,” said Dr. Seongsin Margaret Kim, associate professor of electrical and computer engineering and principal investigator on the research.

“In addition, enhanced interaction of photons with matter by lowering the speed of light gives rise to reduced power consumption in nonlinear optical switching devices and ultra-accurate sensing performance of optical sensors.”

Besides Kim, the paper “Impact of Substrate and Bright Resonances on Group Velocity in Metamaterial without Dark Resonator” is authored by graduate students Mohammad Parvinnezhad Hokmabadi, Ju-Hyung Kim and Elmer Rivera along with Dr. Patrick Kung, an associate professor in electrical and computer engineering.

Parvinnezhad Hokmabadi, the lead author of the published paper, was partially supported by the UA Graduate Council Creative and Research Fellowship.

Kim’s research investigates the interaction between light, a form of electromagnetic waves called photons, and matter to attain combined spectroscopic sensing and near field imaging capabilities by utilizing terahertz waves. Terahertz waves exist in the electromagnetic spectrum between infrared light and microwaves, and are promising for various applications such as security, chemical and biological sensing, biomedical imaging, and non-destructive manufacturing inspection. 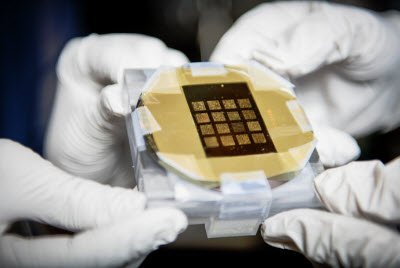 An emerging class of materials, metamaterials consist of specially designed metal patterns on the substrate, like silicon, whose size, geometry and orientation can be selected to allow for exotic optical properties. The device fabricated by the UA researchers can be on both flexible substrate and silicon.Photo courtesy of the University of AlabamaFor the experiment, the research group used terahertz waves, but the scientific findings can be applied to other wavelengths, including visible light, Kim said.

In unencumbered air, light is generally accepted to travel at a constant speed, but it can be slowed by passing through a material. Water, for instance, bends, or refracts, light. While the human eye can detect changes in the speed of light through bended images such as through eye glasses or curved mirrors, the speed of light is not substantially slower with simple refraction.

However, the phenomenon called “slow light” is a different sort of manipulation of the speed of light that can drastically slow  and even stop light waves from travelling, thus reducing what’s called the group velocity.

An emerging class of materials called metamaterials can be engineered with properties not found naturally, which can be structured to interact with light to slow or stop it. Unlike the best known methods for slowing light that involved cold atoms, metamaterials use no energy and are much less complex to implement. They show promise in various applications such as filters, modulators, invisible cloaking devices, superlenses and perfect absorber.

In their lab at UA, the researchers fabricated and measured subwavelength metal patterns they specially designed on top of a substrate, such as silicon. Importantly, this metamaterial is flexible and thin. The main thrust of the paper is explaining how such a thin metamaterial can behave as if it was 1,000 times thicker, which makes highly integrated photonic sensors possible that could also be realized on flexible substrates.

“We have interests in using such a device in applications of sensing, communication and imaging,” Kim said.

This research was supported by the National Science Foundation.