The World Institute of Kimchi (WiKim) announced its development of a rapid analysis method for quantifying capsaicin (CAP) and dihydrocapsaicin (DHC), which are major pungency components in kimchi, within one minute.

The new analysis method, which was jointly developed by the research teams of professor Seong Ho Kang at Kyung Hee University and Dr. Ji-Hyoung Ha at WiKim, refers to high-sensitivity capillary electrophoresis that is performed in submillimeter diameter capillaries filled with surfactants in conjunction with an applied electric field and a laser. This analytical technique intends to quickly and accurately detect only CAP and DHC among various components in the samples.

Conventional tests, such as high-performance liquid chromatography (HPLC), have been employed to identify the pungency components using specialized analysis equipment. However, the HPLC method takes about an hour to analyze the CAP and DHC content in kimchi.

Moreover, the new analytical method developed by the joint research team is designed to utilize voltage program (VP)-based micellar electrokinetic chromatography (MEKC), which uses a combination of the two types of surfactants with different charge characteristics for enhanced detection sensitivity that is applied to samples, in particular.

Related Article: The Science of Fermentation 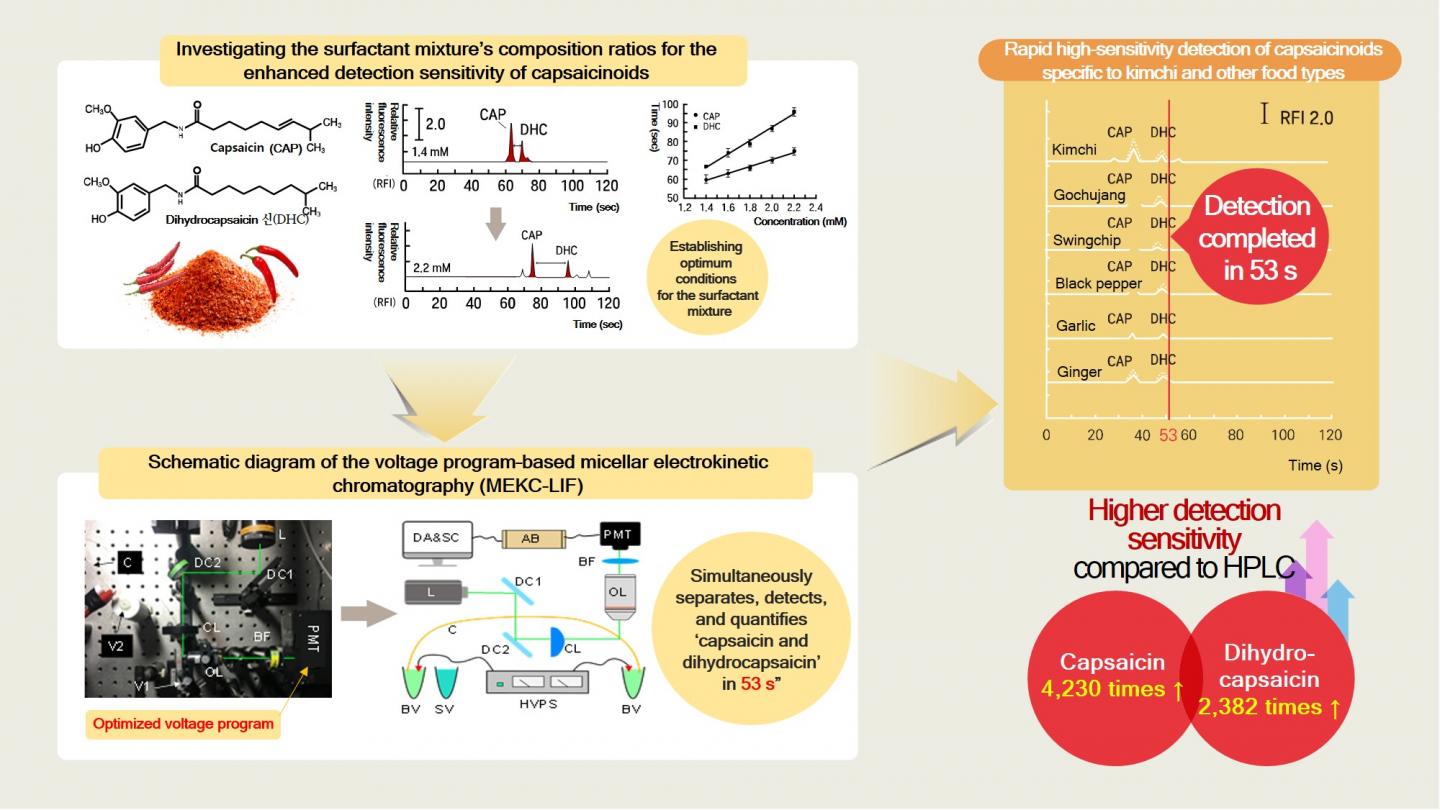 A micelle is a cluster of colloidal particles, which are formed spontaneously through the self-assembly of molecules or ions.

Micellar electrokinetic chromatography (MEKC) is a modification of capillary electrophoresis, where analytes are separated based on analyte-micelle interaction mechanism in the capillaries that is mainly determined by hydrophobicity.

As a result of the experiment, CAP and DHC were simultaneously separated and detected in only 53 seconds, which shows the improved detection sensitivity of the major pungency components by 4,230 times and 2,382 times, respectively, compared with the conventional HPLC method.

"Our new analysis will allow detailed information on the spicy tastes of kimchi to be provided for the consumers, allowing them to choose different kimchi products that suit their preferences. We will also continue pursuing standardization research regarding the tastes and smells of kimchi in the future," acting director Dr. Hak-Jong Choi remarked.

The findings of this research will be published in the September issue of Food Chemistry, an international journal in the field of food science and technology.