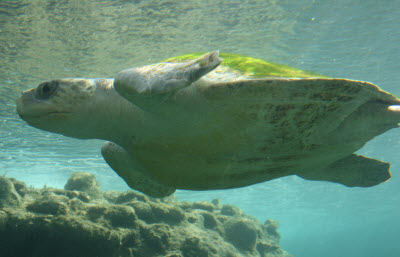 Real seal turtles like this one are the inspiration behind a new generation of "thinking" biomimetic robots developed at the National University of Singapore.Thierry Caro, Wikimedia CommonsNational University of Singapore Engineering researchers are closer to creating underwater robotic creatures with a brain of their own – besides behaving like the real thing. In the near future, it would not be too tall an order for the team to produce a swarm of autonomous tiny robotic sea turtles and fishes for example, to perform hazardous missions such as detecting nuclear wastes underwater or other tasks too dangerous for humans.

In the underwater robotic world, turtle robots are among the most maneuverable. The NUS team’s turtle robot, besides being maneuverable, can also go about determinedly performing what it is set out to do, while being able to react to exigencies and obstacles.

Associate Professor S K Panda leads a team of researchers at the Electrical and Computer Engineering Department who are involved in the research and development of biomimetic solutions in ocean engineering -- looking towards nature for solutions to technical challenges with robots mimicking natural systems. The team is currently putting the final touches to a robotic sea turtle which could move about underwater, including diving to deeper depths vertically, like a real turtle, by just using its front and hind limb gait movements.

Explains Assoc Prof Panda, “Our turtle robot does not use a ballast system which is commonly used in underwater robots for diving or sinking functions. Without this ballast system, it is much smaller and lighter, enabling it to carry bigger payloads so that it can perform more complicated tasks such as surveillance, water quality monitoring in Singapore reservoir or energy harvesting for long endurance. Being able to do a dynamic dive or sinking vertically means that it can also enter vertical tunnels or pipes in the seabed with very small diameters.”

Being smaller and lighter would also enhance its energy efficiency. The NUS turtle robot is also able to self-charge, further reducing the need for it to return to base station for recharging. It is agile and able to turn sharp corners with small radius, without losing speed.

Added Assoc Prof Panda, “We can have a swarm of tiny turtles which communicate with each other and act collaboratively to perform their duties. With improved maneuverability they can go to tiny and narrow places like crevices where bigger vessels are unable to do so.”

Mr Abhra Roy Chowdhury who has been working towards lifelike underwater robots for the last three years for his PhD, said the team has designed and developed four other underwater prototypes – a spherical robot that mimics a puffer fish in structure but uses a jet propulsion technique similar to jellyfishes and squids; and three robotic fishes of different morphologies. These robots are scalable, modular and possess stealth (ability to avoid detection) features.

“If need be, we can actually combine all their merits in a single robot,” added Mr Chowdhury.

Robots with lifelike ‘brain’ and muscles

Mr Chowdhury first developed a lifelike fish robot some three years ago – after spending a considerable amount of time studying the maneuverable and energy efficient movements of real fishes.

He had studied the yellow-fin tuna and the freshwater largemouth bass specifically as they have the most common fish body types as well as swimming patterns. Both are found to be efficient swimmers in sea-environment. He has further developed a novel bio-inspired dynamics and behavior based control architecture for these biomimetic platforms.

Another member of the team, Research Engineer Mr Bhuneshwar Prasad, has also developed a spherical robot. This robot can be used for oceanic surveys, inspections of pipe and cable, inspection of a ship hull or a propeller’s shaft, for example. The spherical robot is vision-based and uses a “visual servoing” system comprising of an on-board bottom facing camera module that is color-coded to extract the position information and then guide the robot.

“The spherical underwater robot, using a self-ballast system, is able to dock on soft ground to harvest energy from underwater currents. Once on the seabed, the robot can be placed in the sleep mode, with only monitoring sensors awake, to harvest power from the underwater current through dynamo based rotor blades,” he explains.

“We expect to invent robots capable of performing collaborative intervention missions three to five years down the road. What we plan to do in the near future is to develop robot fish with muscles which can undulate the way real fish do. For this, we need to develop special actuators. We also aim to develop central pattern generators which will enable the fish to respond to external stimuli so that it can make crucial decisions to complete a critical mission.” said Assoc Prof Panda.