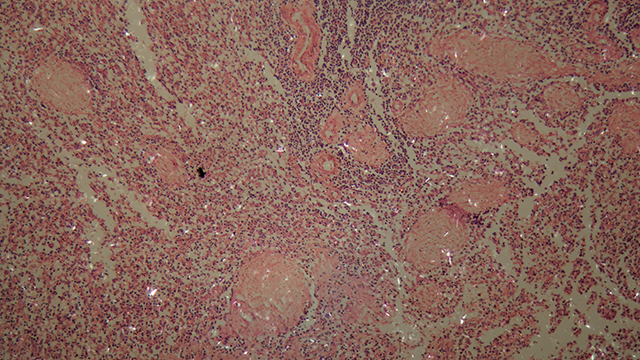 Led by Lana Kandalaft, George Coukos, and Alexandre Harari of the Lausanne Branch of the Ludwig Institute for Cancer Research, the study also found that the vaccine—made from a processed sample of a patient’s tumor and delivered via that patient’s own immune cells—is well tolerated, safely administered, and can be made in sufficient quantities with relative ease. Further, the researchers show that the immune responses it elicits are vigorous and target both known cancer antigens as well as a broad variety of the unique antigens, or “neoantigens,” expressed by each patient’s cancer cells.

“This is the first time ever that a personalized vaccine made from the contents of whole cancer cells has been shown to produce immune responses against neoantigens,” says Kandalaft, who is an adjunct researcher at Ludwig Lausanne. “We’ve also shown that these immune responses are not just any responses, but the type that kill tumor cells, and that they correlate with better progression-free survival and better overall survival of patients.”

The study, reported in the current issue of Science Translational Medicine, addressed a longstanding conundrum of ovarian cancer treatment. Ovarian tumor cells are known to express neoantigens, which are randomly mutated proteins expressed by cancer cells that can be detected as signs of disease by the immune system. Yet the malignancy has so far proved largely resistant to immunotherapies, including traditional cancer vaccines, that stimulate an attack by killer T cells—immune cells that detect and destroy sick and infected cells.

Coukos, who is director of Ludwig Lausanne, has shown that this is at least partly because a factor secreted by tumors, VEGF-A, keeps killer T cells from infiltrating the tumor. Ovarian tumors also harbor T regulatory cells (Tregs), whose job it is to suppress killer T cells.

Many researchers are trying to computationally predict the neoantigens expressed by a patient’s tumors and synthesize the bits—or neoepitopes—recognized by T cells to make personalized vaccines. But, while promising, such approaches are labor intensive and time-consuming, and thus, relatively expensive.

Kandalaft and colleagues wondered if, alternatively, the contents of cancer cells taken from tumor samples—or “whole tumor lysates”—might suffice to make vaccines that train the body to detect the neoepitopes expressed on tumors.

“This would be the cost-effective way of producing an individualized cancer vaccine,” says Kandalaft.

Kandalaft and Coukos devised a novel method for making a vaccine of this sort while still at the Perelman School of Medicine at the University of Pennsylvania—one in which the lysate from cancer cells is gently treated with acid to turn its antigens into more potent stimulators of immune responses. The researchers applied the method to tumors taken from each patient in the study.

Next, they collected certain immune cells from each patient and coaxed them to turn into dendritic cells, which gobble up suspicious biological detritus and “present” antigens to T cells to help stimulate an immune response.

For the clinical trial, which was conducted at the Perelman School of Medicine at the University of Pennsylvania, the researchers pulsed the dendritic cells from each patient with her tumor lysate to generate living and personalized dendritic cell vaccines. These vaccines were then injected into the lymph nodes of each corresponding patient. “The lymph nodes,” explains Kandalaft, “are the headquarters where dendritic cells meet T cells.”

One cohort of patients received just the personalized vaccine. A second received vaccine along with bevacizumab, a standard therapy that blocks blood vessel formation in tumors by targeting VEGF-A—the same factor that bars killer T cells from entering tumors. The third got, in addition to bevacizumab, low doses of cyclophosphamide. This chemotherapy, another standard of care for recurrent ovarian cancer, also happens to suppress Tregs—which are recruited into tumors to shut down killer T cells.

“The regimen used for the third cohort really made a difference—first in eliciting an immune response in patients who received it, and then in the progression-free survival and the overall survival of those patients a year and even two years after receiving the therapy,” says Kandalaft.

Extensive immunologic analyses, led by Harari and Kandalaft and conducted at Ludwig Lausanne, show that the vaccine stimulated the immune response in unique ways: The T cells elicited by the vaccine not only recognize a broad spectrum of neoantigens but are far more sensitive to lower levels of those antigens, and more fiercely activated.

Although the study met all of its endpoints, it was not a randomized, placebo-controlled trial. The researchers did, however, compare their results with historical patient data of ovarian cancer recurrence and the outcomes recorded in their practice. “At one year, 100 percent of the patients in cohort 3 were alive, as compared to 60 percent when patients receive just bevacizumab and cyclophosphamide but no vaccine,” says Kandalaft.

Their therapeutic strategy, Kandalaft notes, would also be eminently suited to swift implementation if it passes muster in larger, randomized and placebo-controlled trials.

“We aren’t giving patients any completely new drugs in combination with this personalized vaccine,” she points out. “Bevacizumab and cyclophosphamide are routinely used to treat recurrent ovarian cancer. All we did was add the vaccine. This means that we should be able to easily integrate this personalized immunotherapy into the current standard of care for recurrent ovarian cancer.”

The study was supported by Ludwig Cancer Research, the US National Institutes of Health, the Abramson Cancer Center of the University of Pennsylvania, the Marcus Foundation, the Ovarian Cancer Immunotherapy Initiative, the Pennsylvania Department of Health, the Ovacure Foundation and the Swiss State Secretariat for Education, Research and Innovation.

In addition to his Ludwig post, George Coukos directs the Department of Oncology UNIL-CHUV at the Lausanne University Hospital as well as the Swiss Cancer Center Léman. Alexandre Harari is also director of the Immune Monitoring Core at the Center of Experimental Therapeutics at UNIL-CHUV. Lana Kandalaft is an assistant professor at the University of Lausanne (UNIL) and Director of the Center of Experimental Therapeutics within the Lausanne University Hospital.