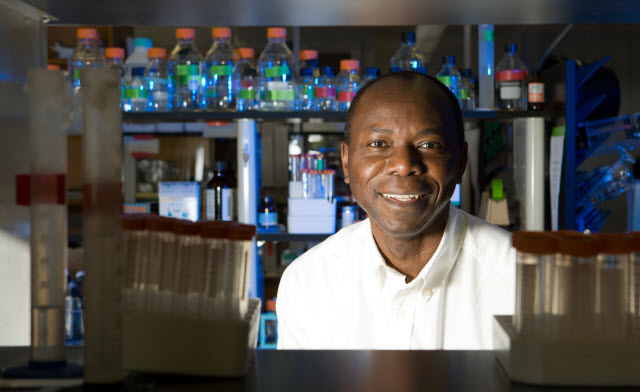 Athens, Ga. - Researchers at the University of Georgia are working to find the fastest way possible to treat and cure human African trypanosomiasis, long referred to as sleeping sickness. By working to improve chemical entities already tested in human clinical trials, they hope to have a faster route to field studies to treat the disease using drugs that can be administered orally to patients.

Human African trypanosomiasis, or HAT, is a tropical disease endemic to some rural communities in sub-Saharan Africa. A vector-borne parasitic disease, existing diagnosis and treatment regimens are complex, especially challenging in some of the world's most poverty-stricken regions.

"There is a significant challenge in terms of trying to find new drugs to control the disease," said Kojo Mensa-Wilmot, professor and head of the department of cellular biology in the Franklin College of Arts and Sciences. "Currently used treatments cannot be given orally and require people to go to a clinic in rural settings, which presents a problem for both health professionals as well as those infected with the disease."

The new paper describes "drug re-purposing" by the UGA-led team, an approach in which drugs developed for one disease are tested for effectiveness against a different disease. As part of a drug discovery initiative funded by the National Institutes of Health, Cleveland Biolabs Inc. synthesized a class of compounds from which the research team selected to test against the parasite. Using an animal model for the disease, the researchers administered the drug orally to and cured the disease in mice.

"Their original goal was to create compounds to cure some types of cancer. From more than 30 compounds screened we found one that cures the disease and two more with potential to eliminate the infection," Mensa-Wilmot said.

"There are two compounds in clinical trials now that could be useful, but the pipeline for discovering these anti-trypanosome drugs is woeful," said Mensa-Wilmot. "HAT is a disease of poverty, really, so there is little motivation for the pharmaceutical industry to be heavily invested. Because the parasite can become drug resistant, it is very important for us to be vigilant in finding new effective, orally administered treatments for the disease."

HAT is caused by infection with the protozoan parasites belonging to the genus Trypanosoma brucei, which are transmitted to humans by tsetse flies. Rural populations living in regions that depend on agriculture, fishing, animal husbandry or hunting are the most exposed to the tsetse fly and therefore to the disease. The disease develops in areas ranging from a single village to an entire region. Sustained control efforts have reduced the number of new cases and in 2009 the number reported dropped below 10,000 for the first time in 50 years, according to the World Health Organization.

Co-authors on the study are Sarah M. Thomas, a postdoctoral associate in the department of cellular biology and the Center for Tropical and Emerging Global Diseases at UGA; Andre Purmal, Cleveland BioLabs Inc., Buffalo, New York; and Michael Pollastri, associate professor in the department of chemistry and chemical biology at Northeastern University, Boston, Massachusetts.