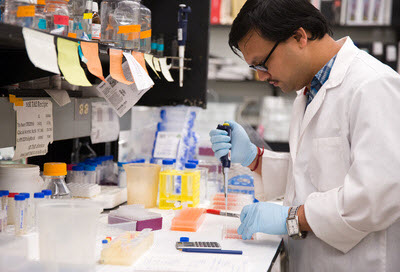 “This discovery is significant because we now know how to stop autoimmune diseases in a highly specific manner without compromising immunity in general,” says Dr. Pere Santamaria, a professor in the Department of Microbiology, Immunology and Infectious Diseases, and member of the university’s Snyder Institute for Chronic Diseases.

More than 80 autoimmune diseases affect people around the world. In these diseases, white blood cells, normally responsible for warding off foreign invaders like bacteria and viruses, sometimes mistakenly attack the body’s own "good" cells, causing their destruction. Each specific autoimmune disease results from an attack against thousands of individual protein fragments in the targeted organ, such as the insulin-producing pancreatic cells in the case of type 1 diabetes. 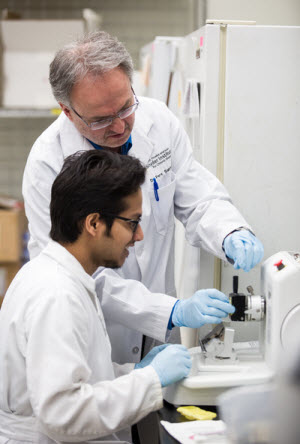 The study, led by Dr. Pere Santamaria (top), a professor in the Department of Microbiology, Immunology and Infectious Diseases, and member of the university’s Snyder Institute for Chronic Diseases, shows promise for treating diseases without compromising a patient's normal immunity levels.Photo credit: Riley Brandt, University of CalgarySantamaria’s study shows that nanoparticles (particles thousands of times smaller than a typical cell), decorated with protein targets acting as "bait" for disease-causing white blood cells, can be used to reprogram them to suppress the disease they intended to cause. This new class of drugs (nanomedicines called Navacims) exploits a naturally occurring process, previously unknown to science, that is wired into our immune system to protect us against autoimmune disease.

Santamaria has shown that this mechanism and the nanomedicines that exploit it can be applied to several, and potentially all, autoimmune diseases in animals, by simply changing the bait on the nanoparticles. The study also shows that this mechanism operates in animals transplanted with human white blood cells, which essentially responded to the corresponding nanomedicines like their mouse counterparts.

In order to treat autoimmune diseases, most of the white blood cells directed against each of these targets need to be"‘taken out"; however, many remain unknown. Current drugs have no way of distinguishing rogue white blood cells from normal ones and as a result, drugs used to treat these diseases also suppress normal immunity leaving the individual susceptible to other illnesses.

“Imagine if you wanted to stop a war,” says Santamaria. “You would probably want to take out the entire army, which is what current drugs try to do.” He notes that this new class of drugs deals with this problem from a completely different perspective “Rather than taking soldiers out, our drugs trick a single soldier into becoming the ‘traitor’ that takes out the army general.” He adds, “Without the general, the army ceases to operate and the war ends.”

Santamaria’s new drugs are currently being developed for the treatment of specific human autoimmune diseases by Parvus Therapeutics, Inc., a biotechnology company he founded with Innovate Calgary.